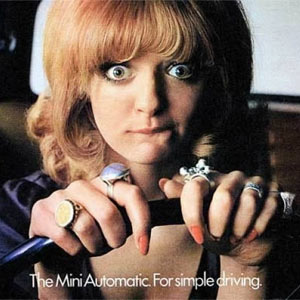 Last week, I was crossing a street at a busy intersection with a dozen other pedestrians when a left-turning snow white SUV came lunging toward us from the opposite direction. The driver, was a young woman, sort of pretty, with nicely-done fake blond hair, a power suit, and her SUV was high end.

When she jolted right up to the line of pedestrians, she gave us a hate expression like she would have preferred to run us over.

I understand where she was coming from. She was probably thinking that, because she was more powerful and dangerous than us, that we should have stayed on the curb and let her do what she wants.

"I'm stronger and more dangerous than you, so you better let me do what I want."

This is a typical driver attitude. But what struck me, at that moment, was that is also the attitude of "rape culture." Women are able to participate in rape culture (in the rapist role) the minute they sink their nails into a leather steering wheel.

Cars became popular in North American cities shortly after WW2. At first, urban dwellers hated them because city streets were full of children playing back then, and cars kept killing them. After many bribes to government officials from car companies, propaganda campaigns, and of course, a major change in childhood behavior... cars took over the street, and kids learned to play in caged-in playgrounds designed by car companies. As cycling to school and other childhood street activities faded into the collective memory, less and less children were crushed by these vehicles ... because no children dared use what were once 'their' streets anymore.

This process of scaring the hell out of children and parents in order to change behaviors is... the very definition of terrorism. That's how cars took over our streets. Through a terror campaign that involved a lot of real death and destruction.

soundtrack
"a nation of passive Eichmanns, who sit in their living rooms, popping pills and watching television as their country’s military machine mows down people by the millions"
- Jim Garrison, 1969

Like
-  07 Apr 2017 04:37 #14794432
The entire "everyone owns a car" paradigm is dumb and should go away. Cars can easily be shared through some kind of uber-like system for people that need them and personal ownership of a scooter is in my mind far more reasonable, although also not strictly necessary.

It's also possible that the expansion of car ownership in America post WWII was part of an expansion of the military-industrial complex that was tied into the Cold War, I think this is what Qatz is getting at.
Orb Team Re-Assemble!

Like
-  07 Apr 2017 20:31 #14794760
Imagine if Qatz was born in the Netherlands.
He'd had 5 posts on this forum.
In China the government owns the banks. In America the banks own the government. Which is better? Let's read newspapers owned by billionaires to find out!

Zionist Nationalist wrote:Qatz is too poor to own a car

In shitty North American suburbs, poor people are forced to own cars, and this makes them much poorer than they really are, and their lives shittier because of the waste of resources and dangerous public places that cars create.

“A developed country is not a place where the poor have cars. It's where the rich use public transportation.”
― Gustavo Petro

Decky wrote:Tell us all about the tyranny of cycle helmets next please.

Rather than investing in bicycle infrastructure, corrupt well-bribed politicians make helmets mandatory, and this removes so many cyclists from the roads (especially kids) that car companies drool.
"a nation of passive Eichmanns, who sit in their living rooms, popping pills and watching television as their country’s military machine mows down people by the millions"
- Jim Garrison, 1969

Reply
Return to “Cars and Trucks and Things that GO!”
22 Feb

Back in the real world you would need to prove it[…]

Well, since you basically just called me a stormf[…]

*Before* the election, our intel guys, and the in[…]