China Faces Off Against World on Trade - Politics Forum.org | PoFo

China Faces Off Against World on Trade

Mark Magnier in Beijing and William Mauldin in Washington wrote:China’s 15-year anniversary as a member of the World Trade Organization on Sunday threatens to trigger a clash with growing forces in the West that cast Beijing as an abuser of open global markets.

The anniversary marks Beijing’s eligibility for “market-economy status,” which would remove many risks of punishment when Chinese companies are accused of selling products below cost. But the issue is bringing to the fore mounting global frustration over China’s state-led economic policy.

Since joining the WTO on Dec. 11, 2001, China has leveraged the open markets the organisation fosters to lift millions of people from poverty and catapult itself to become the world’s No. 2 economy. But Beijing’s critics say it has gamed the system by curbing access to its markets and marshalling massive state resources to compete against foreign companies.

“China wanted the advantages without meeting its obligations, and trade won’t work when it’s a one-way street like that,” said Rep. Sander Levin, the top Democrat on the House committee that overseas trade. “They went in with full knowledge and essentially began thumbing their nose.” Mr. Levin voted for legislation tied to China’s WTO accession but has since become a vocal critic of Beijing’s compliance.

Changing China’s market-economy status is dependent on individual countries declaring that they are changing the way they handle antidumping and other trade cases—something the Obama administration isn’t ready to do.

“It is a conversation that we are engaged in, but it is not ripe for us to change our protocols,” said Commerce Secretary Penny Pritzker said last month after talks with Chinese officials.

President-elect Donald Trump has threatened to declare China a currency manipulator and slap big tariffs on its hundreds of billions of dollars in annual exports, although some of his aides have played down those warnings as laying the ground for future negotiations. “They haven’t played by the rules, and they know it’s time they’re going to start,” Mr. Trump said at an Iowa rally on Thursday, naming “massive theft of intellectual property” and “product dumping.”

Mr. Trump’s comments and choice of advisers—including steel executives—suggest his administration will step up trade enforcement against China through the WTO as well as in antidumping and subsidy cases within the U.S., trade lawyers say. Trump representatives didn’t comment on the issue. 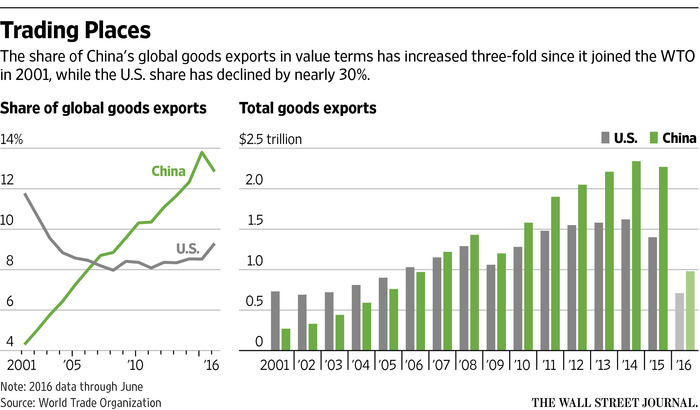 The European Commission, the EU’s executive arm, also isn’t ready to declare China a market economy. In November, the commission proposed a new formula to calculate antidumping duties. In cases where it determines markets are distorted by state intervention, the commission would eliminate the concept of nonmarket economies and instead allow for high tariffs to be imposed on imports deemed to be priced below international-market levels.

“We are not declaring China a market economy status but we are reforming the system so as to make it country-neutral,” Cecilia Malmström, the EU’s trade chief said Wednesday.

Japan said this week it continued to view China as a non-market economy.

Beijing bridles at being a lightning rod for global angst over trade and unemployment and on Thursday renewed vows to take WTO countermeasures if it doesn’t receive market status.

“We are playing by the rules and you need to keep your promise,” Xue Rongjiu, a trade adviser to the State Council, China’s cabinet, said this month. “It’s unfair to blame China for your problems, which have resulted from bad management and operations.”

Economists say China generally abides by WTO rules, a system largely designed to address the movement of goods across borders, making it difficult to deny Beijing market-economy status over the long term.

“The WTO seems like a single-stroke engine in a jet-engine age,” said James McGregor, former chairman of the American Chamber of Commerce in China. “China has played into our open system with great skill.”

Zak Fardi, founder of U.S. solar panel maker 1SolTech Inc., said China’s system victimized him. The Dallas-based company prospered until late 2011 when Chinese state-subsidized panels began flooding the U.S. market, he said. The Chinese sold panels at 40% below his production cost and offered customers multimillion-dollar lines of credit he was unable to match.

Panel makers petitioned for help, leading to punitive U.S. and European duties on imports of Chinese solar cells even as Chinese manufacturers denied competing unfairly. But by then the damage was done. Not only did Mr. Fardi’s business fail but dozens of Chinese solar makers did too after the subsidies sparked a competitive glut. “They kicked our butts,” Mr. Fardi said. “It was definitely dumping. It seemed very well organized.”

Beijing’s industrial policies are driving discontent to new levels, especially over excess Chinese production of steel, aluminium and other products. In the first half of 2016, 17 countries and regions launched 65 trade investigations against Chinese products, a two-thirds increase year-over-year, according to Chinese data. Beijing has pledged to cut 150 million tons of steel production by 2020, but industry analysts say that would reduce only about a third of China’s 30% excess capacity.

A new source of concern to foreign companies is the “Made in China 2025” blueprints released last year that call for indigenous development and import substitution in many strategic industries where Western companies have an edge, including semiconductors.

“The global system of trade is under siege and has been challenged by the biggest new kid on the block, China, not playing by the rules,” said Joerg Wuttke, president of the European Union Chamber of Commerce in China. “China points at growing protectionism of the West, but they only have themselves to blame.”

Calls also are rising to tighten curbs on Chinese technology investments in the U.S. in response to investment bans Beijing has imposed, often on national security grounds.

—Viktoria Dendrinou in Brussels and Chieko Tsuneoka in Tokyo contributed to this article.

Depends on how far into history you want to go.[…]

The same could be said for Affable Al, @Crantag […]

Sure they did, and plenty of others benefitted as[…]