Several have said that they fear wars starting in Europe if the EU breaks up. - Page 4 - Politics Forum.org | PoFo

Several have said that they fear wars starting in Europe if the EU breaks up.

Re: Several have said that they fear wars starting in Europe if the EU breaks up.#15035763 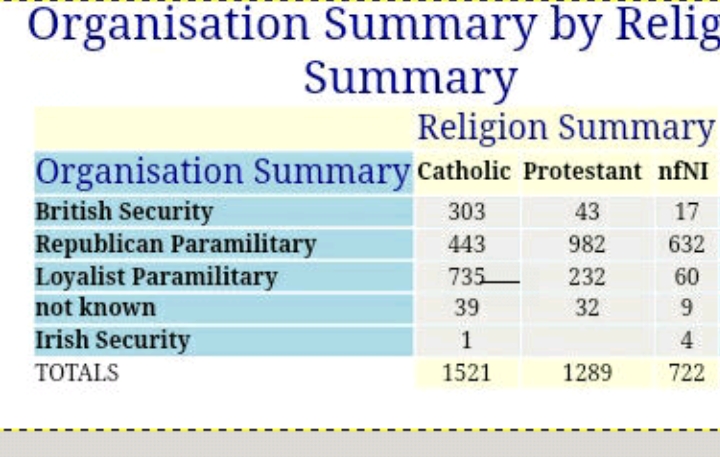 That was a pretty catastrophic attempt on your part.

Still, even the amount of people the 'RA killed; that's nothing compared to the potato famine, centuries of bloody oppression and the fighting it took just to get the free state.

And your book excerpt is shit, the troubles started in 68 as confirmed by that CAIN site if you'd bothered to check....

Look, you don't know about this conflict or the history of the British in Ireland. You don't even understand what you're defending. If you knew, you probably wouldn't bother.

I clicked back to the original web page because I want to see how long it claimed the Troubles extended.
To do that I had to make a table of the years vs the organization that did the killing.
The table ran from 1969 until 2001 (i.e., for 32 years) and the total deaths was 3532.
This is just over 110.37 killed per year. Of course this doesn't count the wounded or the number who's lives were ruined in some way. An example of lives being ruined is that austerity has created so much unemployment in Greece that a large percentage of its young adults have been forced to move somewhere else to get a job and support themselves. The likelyhood is that they will never move back to Greece. This is bad for Greece (whois going to be paying the taxes to support the retired people in 20 years?) and I don't think that being forced out of your homeland is good for the young adults either.

Re: Several have said that they fear wars starting in Europe if the EU breaks up.#15035770

I agree it wasn't a war, although it would likely have developed into a civil war without the involvement of British troops. Terror campaigns are not only devastating because of the deaths but also because everybody can be the next victim of a blast. And of course every terror incident fans the flames of sectarian hatred which can lead to more deaths. So there was potential for a much larger number of victims and some of the effects of terror are quite similar to that of war.
"Science is the belief in the ignorance of experts"
Richard Feynman

Re: Several have said that they fear wars starting in Europe if the EU breaks up.#15035797

So....you didn't include the loyalist paras which the RUC and Brit army were proven to have collaborated with.
±±±

Re: Several have said that they fear wars starting in Europe if the EU breaks up.#15035820

Presvias wrote:So....you didn't include the loyalist paras which the RUC and Brit army were proven to have collaborated with.

Of course not, and neither does the CAIN website when grouping organisations, because we have no time for fanatical partisanship. I told you that right from the beginning by the way.
"Science is the belief in the ignorance of experts"
Richard Feynman

I don’t understand why we should want to disarm pe[…]

Any corporation with a CEO, executive staff and a[…]