To fight hunger in cities, supermarkets which allow produce to expire should be penalised. - Politics Forum.org | PoFo

To fight hunger in cities, supermarkets which allow produce to expire should be penalised.

To fight hunger in cities, supermarkets which allow produce to expire should be penalised.#15078056

All food that remains after expiry date will need to be accounted for and a fine is imposed if a quantum amount by both weight or cash value remains based on supermarket turn over.

Supermarkets will have to give away all expiring foods FOC half hour before store closure or 12MN on day of expiry, whichever earlier. Those who decide otherwise will have to engage a licensed food charity to do the likewise, however, such charity benificiaries must also receive the edible foods not more than 1 hour after the expiry dateline.

I have watched Facebook videos about Singapore now being a ghost town, even before the Thursday 26 March 2020 dateline for all entertainment outlets to be closed (all tourist were barred from entry since Tuesday). Long queues of taxis were seen queueing for passengers where obviously there were none. NTUC wouldn't even allow promoters to promote foodstuffs for fear of virus spread through human communication. All group tuition classes will be banned and no groups of 10 or more people are permitted. Extra curricular activities for school students have been banned since Monday, 3 days ago and since yesterday, SIA announced that 138 of 147 planes will not fly (96% shutdown of passenger service).

Many people face joblessness or no pay leave in this circumstance and may feel very agitated at seeing NTUC throwing away edible food. Most will feel annoyed and insulted at NTUC paltry 15% discount to clear expiring stocks. Many will feel disparaged and insulted by NTUC who would equate human dignity with a 15% discount, making the difference between a human stomach and the rubbish trash can just a marginal difference of 15%. Yes, to NTUC, the difference between a poor/ hungry person and the dustbin is just 15%.

If social agitation occurs, people will Rob NTUC stores upon suspicion that the management is irresponsible and inhuman with regards to food distribution, prefering to extract every dollar from consumers and maybe even guilty of the immoral and criminal conduct of heading an anticompetitive carbal or cartel to rip of consumers in Singapore.

NTUC must stop this very decadent and evil practice of holding the people's hunger ransom to food routinely scheduled to be thrown into the rubbish bin, save a token 15% to remind the poor what their being is worth to large supermarket chains like NTUC.

As Singaporeans hunker down together to share what they have in the spirit of #SGunited, NTUC should break up its partnership with the dust bins and its obsession for price fixing and excessive profits and respect the origin and purpose of edible food instead.

The stomach is growling.

NTUC, please feed the hungry stomachs and not the dustbin.

Photos showing significant quantities of imported high quality salmon placed on last minute 'quick sales' at NTUC which don't / never happen, in part because the under 15% discount is totally derisory and lackluster: 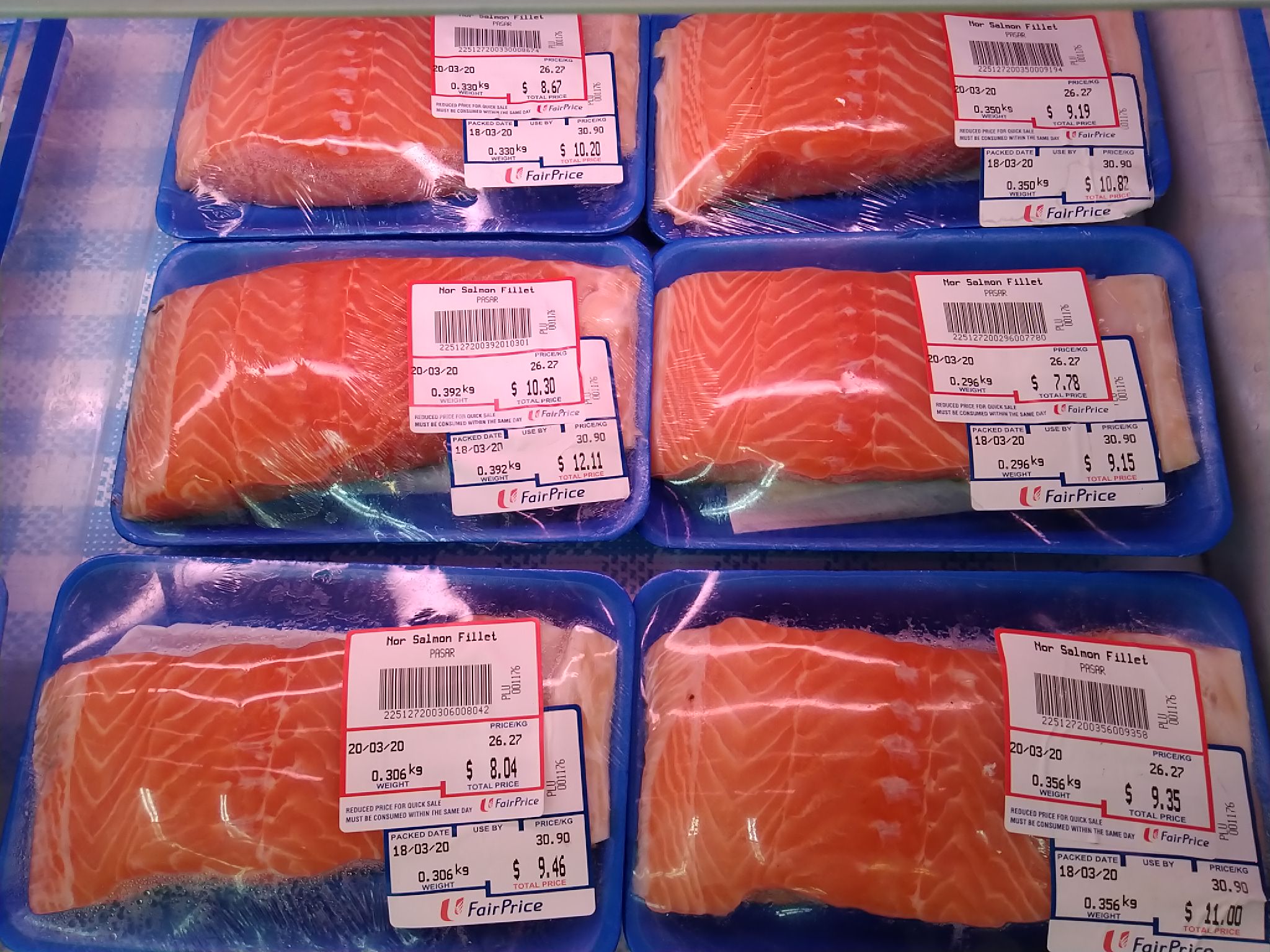 Same photo with proof that it was taken at 10.35pm, 85 minutes before 12MN when it has to be discarded because expired food cannot be sold nor displayed on supermarket shelves: 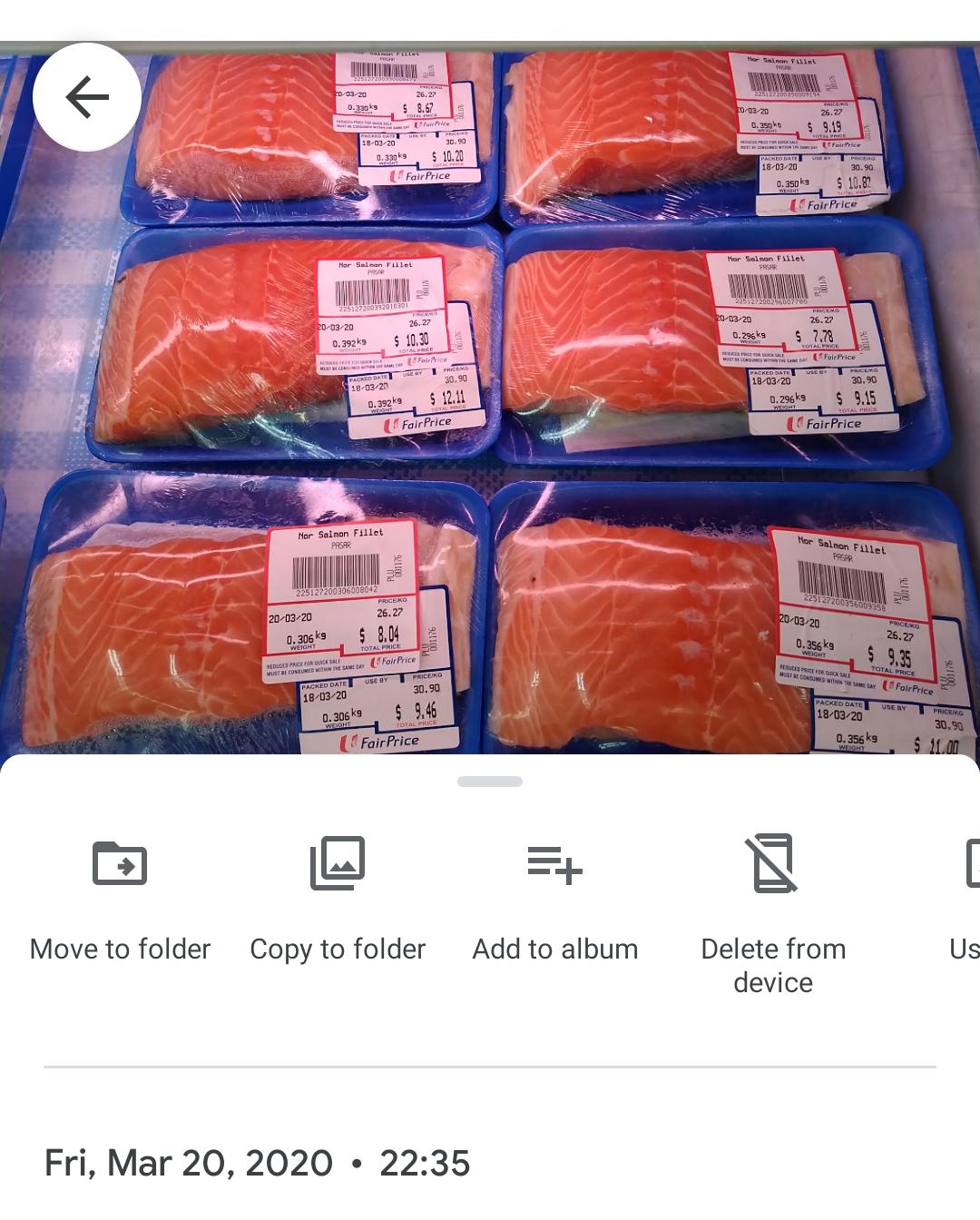 Reduced priced fruits should also be more cheaply priced so that they are quickly sold (being already damaged), rather than overpriced to squeeze as much money from poor people as possible with the outcome being that most end up rotten in the bag, (just to remind the poor that they will likewise quickly perish and decompose in overpriced and mercinery Singapore): 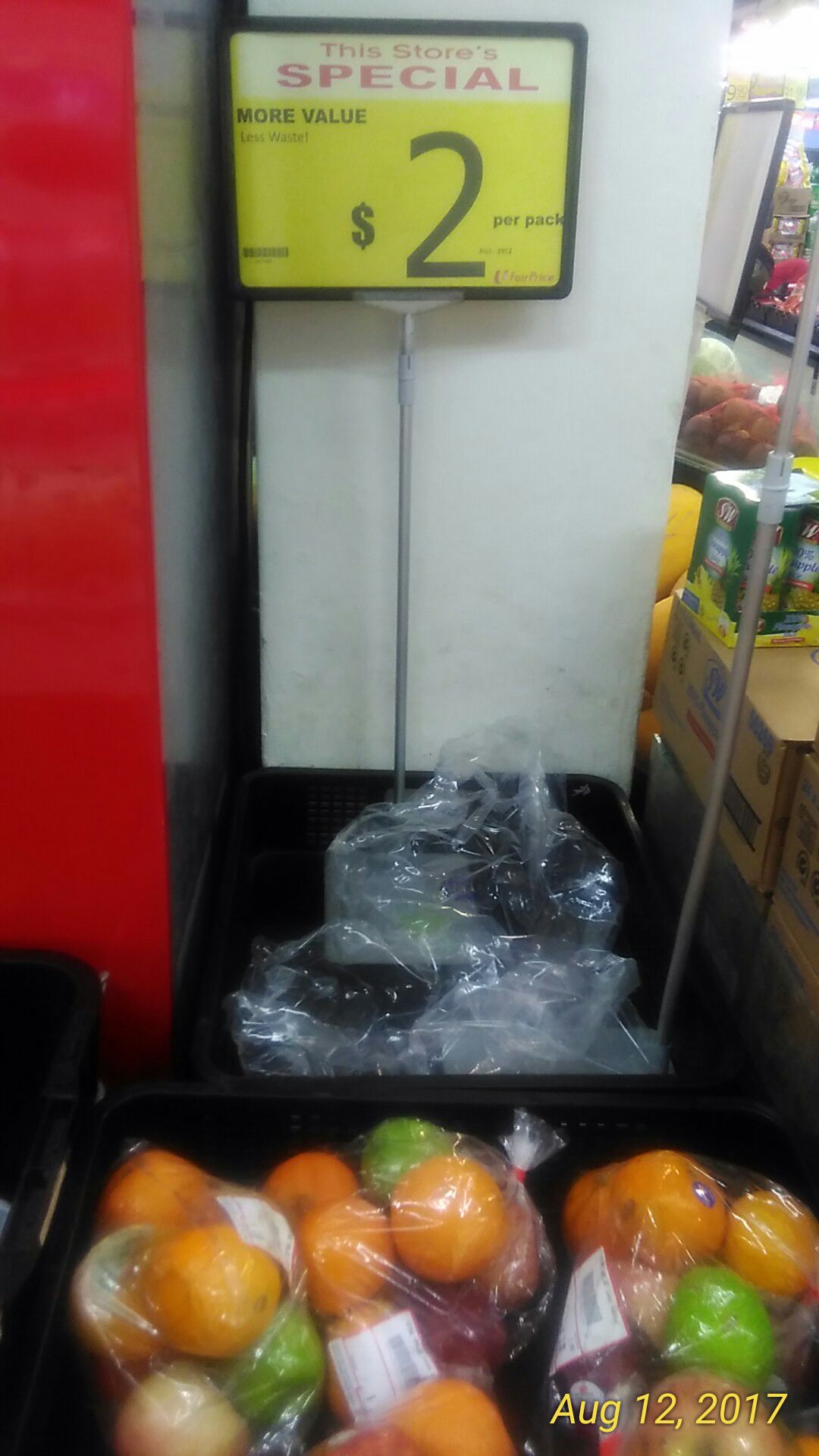 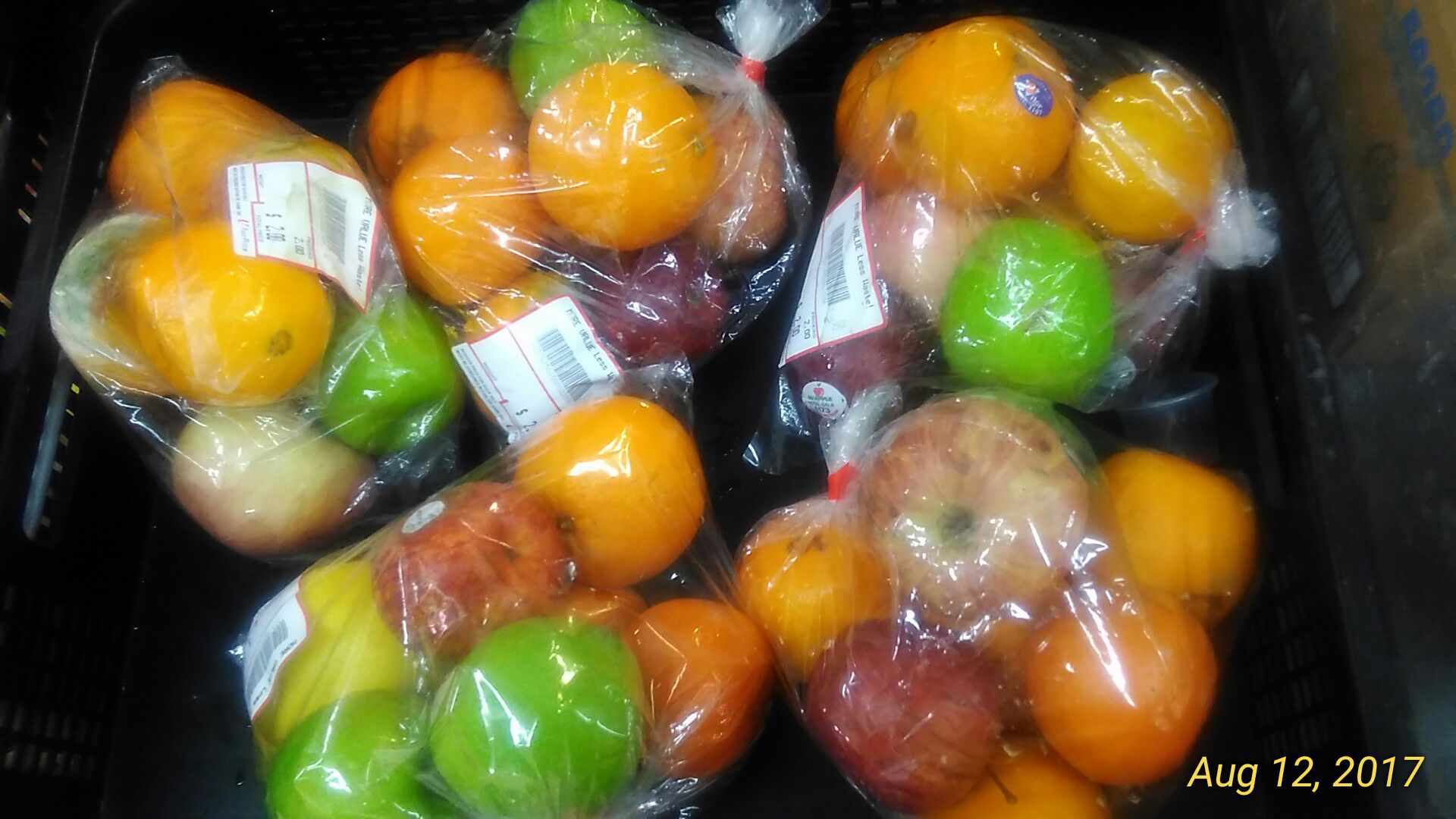 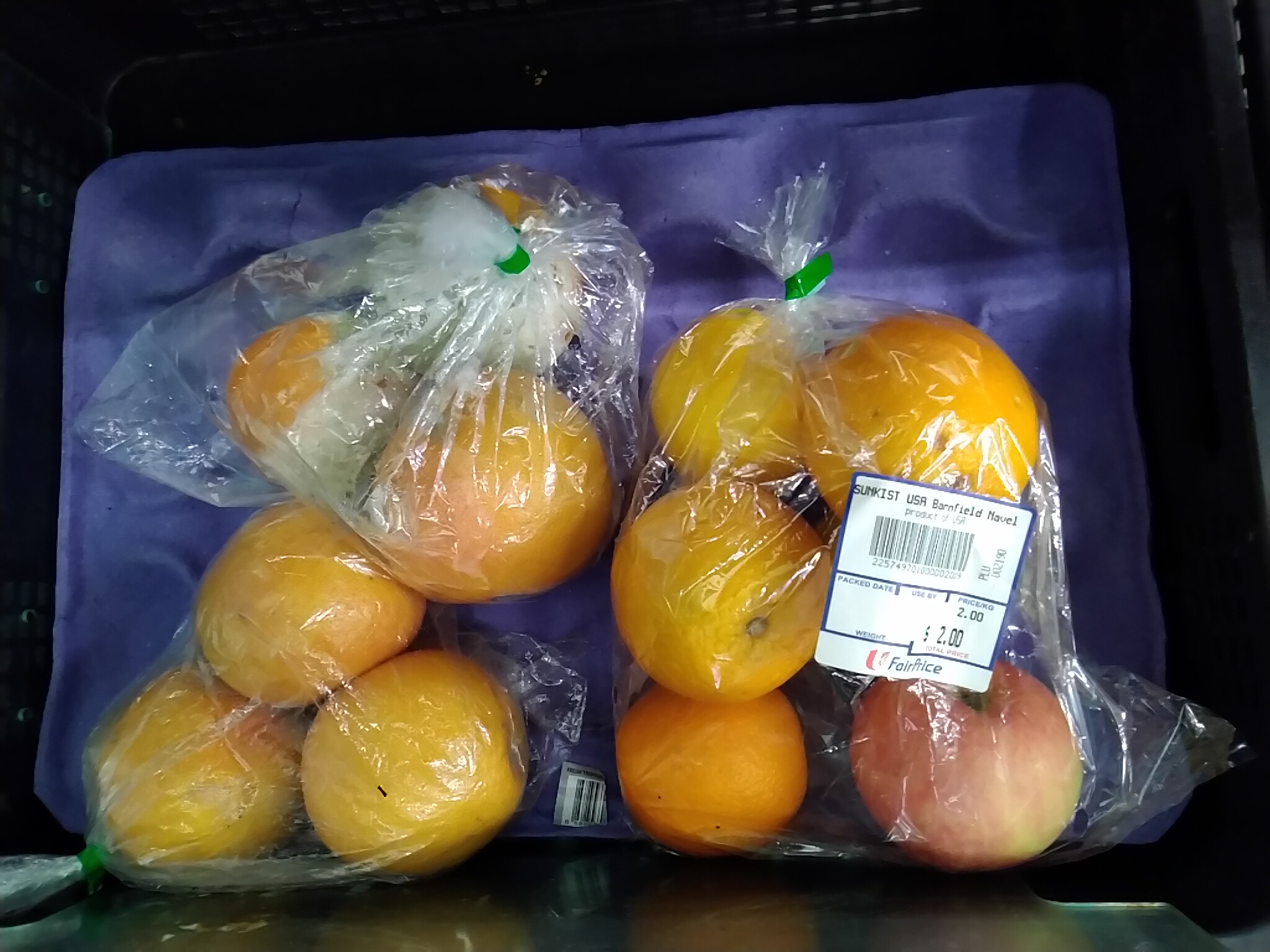 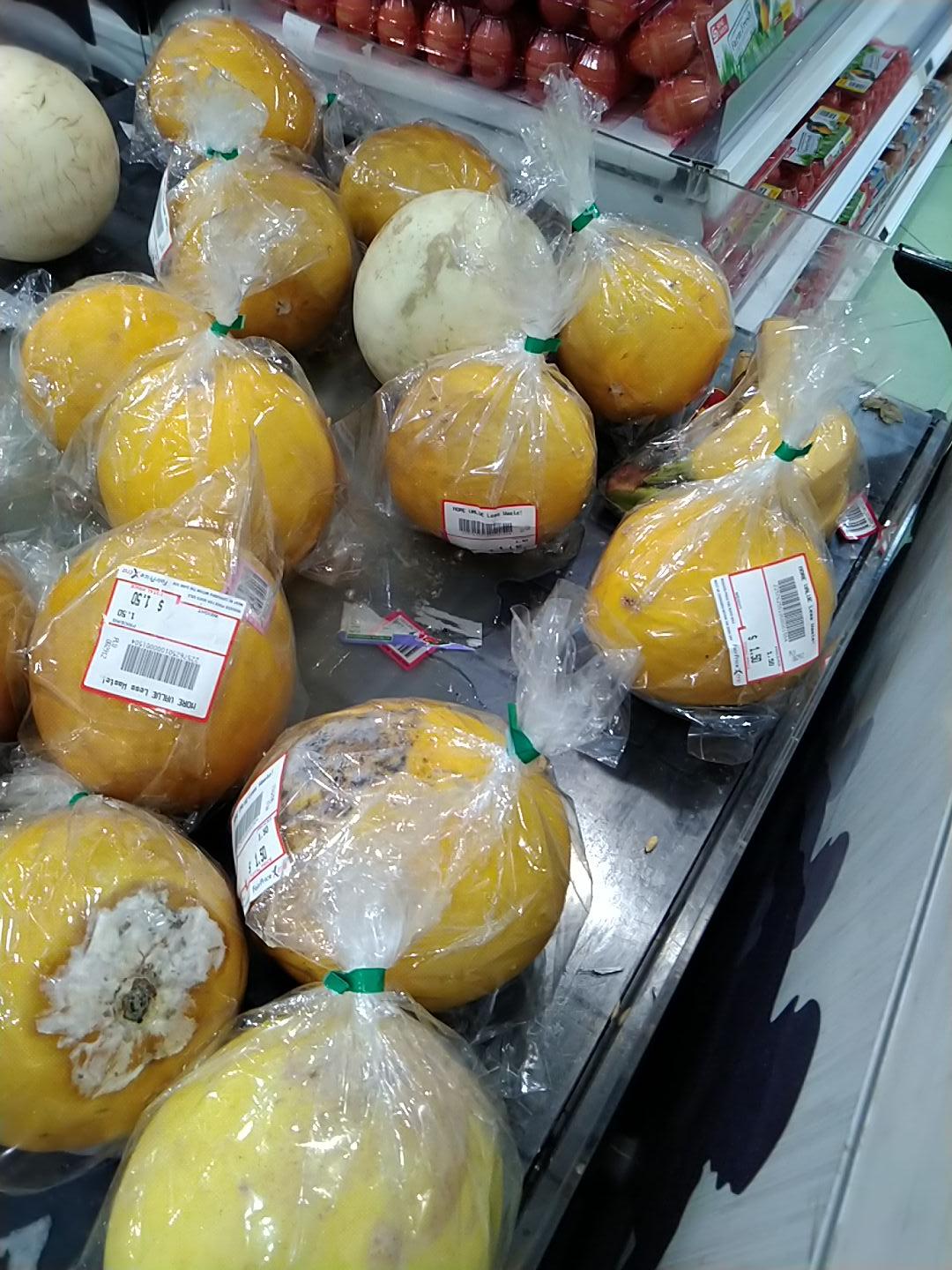 PS:
For the avoidance of doubt, I am not advocating NTUC giving out everything for free, just the excesses caused by inaccurate / excessive stocking caused by excesses (greed) on the purchasing end. By reducing the price of edible food over its life span and especially on day of expiry, NTUC may actually out compete other supermarket chains with higher footfall through greater good will and the trust of customers that NTUC is a good steward of God's provision of food and thus judiciously reducing wastage in its supply chain system. Other gimmicky special offer items and costly newspaper advertising avoided if people trust NTUC to be a noble supermarket which offers good discounts to ensure that no food is wasted due to expiry date issues and prices are always fair according to degree of freshness and the need for same day consumption.

Singaporeans on their part shouldn't be greedy/choosy and accept what is in season or in stocked in excess for a cheaper and fair price.

As Singaporeans realise that NTUC is not just another con job but a conscientious and model supermarket, Singaporeans too will be kinder and perhaps utilise the access to cheap or free same day expiry food to organise soup kitchens so those suffering joblessness due to COVID-19 or whatever economic problems can have enough nutrition at least to get by (an hospitals will be less crowded from persons with malnutrition related illnesses too).

Singaporeans need to unite to lift the social and border shut down orders which are the consequence of the hospital and ICU being too full to accept further COVID-19 cases.

And the role of NTUC is just as critical in this regard.
~ Matthew 25:40: "The King will reply, 'I tell you the truth, whatever you did for one of the least of these brothers of mine, you did for me.'"- (NIV)

Re: To fight hunger in cities, supermarkets which allow produce to expire should be penalised.#15078071

Apparently leftovers in Singapore get burnt to generate more electricity? So possibly supermarkets are too use to that arrangement?
Location: Melbourne, Australia
Ideology: Australian Liberalism

Re: To fight hunger in cities, supermarkets which allow produce to expire should be penalised.#15080954

The giving out of expiring food also require manpower, who is going to do this? NTUC staff? Who will pay them?

And which Charity benificiaries will do the likewise before store closure or 12MN? TS going to volunteer to go daily 7 day a week at store closure?

TS live in a world where everything is FOC? Manpower is FOC? Time is FOC?

Just the salmon in the photo of my FP, total original sales value is in excess of $60.

All that is necessary to clear before expiry is to stick stickers of 25%, then 50%, the 75% onwards as specified intervals. At 25% discount, recovery will still be $45 and $15 at 75% discount. (easily enough for between 2-5 hours of part time staff labour), and we are speaking of not just this one item.

Even give away FOC means no need to pay garbage disposal charges, which I hnderstand can be easily $70/ton. And near expiry food may also have increased bacterial contamination, so the earlier that good is cleared before expiry date, the fresher the sales counter and overall less incendence of food poisoning for every perishables food customer.

I am also not so keen on the charities collecting since as u mentioned, these are perishables, so they will need to do the distribution either at last minute or have means to cook the items and preserved the cooked food (at an unearthly hour).

Why not trust customers to do their part by donating their savings to charity as some Singaporeans do (poor also do donate money and time okay).

And not all customers are affluent and some may be malnourished due to in affordability of nutritious food.

The nonchalance and callousness of NTUC staff to discard away edible food as I say is what is causing all the panic buying and hording (during present Covid-19 epidemic) since it is well known that NTUC doesn't really care about people but more for profit, based on their wasteful and callous handling of perishible food.

Sushi counters are very adept to reducing prices because freshness of sushi is priority and any unsold stock at end of day cannot be sold.

Any primary school kid can be trained to stick stickers on expiry food items in sequence of 25-50-75% discount at scheduled time intervals (although stock taking and clearance of seasonal excess stock may require more experience).

The store could even allow customers to check out left over clearence items at the end of the day for FOC, as evidence that nothing in the store is overpriced (since overpriced stuff will result in no buyers and thus a loss for the store of having high food disposal tonnage or need to give food away FOC).

Much better NTUC do transparent business than do make believe sales as a decoy for their brainwash mechanism, price fixing practises.

This would of course entail that the original display prices would be much higher than market rates, however, this also guarantees premium customers that the produce is indeed the freshest possible and that there is minimum contamination from stale food also on display because of the high turnover system and wide customer base, whereby every customer is able to obtain food at his preferred price and freshness point and zero food goes to waste.

(for produce like eggs, with a shalf life of 1 month, the same would apply with each egg tray bar coded according to its consignment date).

Probably, the reason why supermarket staff are overworked is because they are busy 'cheating' customers by always trying to arrange near expiry foods in the front of displays, which is always upset and reversed by customers who know this trick and dig everything out just to get to the deepest placed stuff with the longest expiry date, the whole process repeats itself many times over the day, each party reversing the display arrangement of the other, wasting the time of both parties on opposite sides of the transaction and this is seriously time inefficient.
~ Matthew 25:40: "The King will reply, 'I tell you the truth, whatever you did for one of the least of these brothers of mine, you did for me.'"- (NIV)

No, the pandemic demonstrates the danger of voting[…]