Atlantis wrote:@Istanbuller, your friend Putin is about to reign in your neo-Ottoman ambitions in Libya. Should we be getting more popcorn to watch you guys killing each other?

Russia to send 1,000 mercenaries from Syria to Libya

You look from wrong side. We are in, but you are not.

We are already collaborating with Russia. This step might be a part of compromised plan which is to keep you out of Libya. Your Russia-Europe partnership hopes are just a wet dream while Turkish-Russian cooperation is a real thing.

May they wage war across Europe!

Istanbuller wrote:You look from wrong side. We are in, but you are not.

And God be praised for that. When you guys are hell-bent on pocking your nose into a wasp's nest, we are definitely out to watch from a safe distance.

Yeah, sounds just like Putin to ally with the Islamists against his Orthodox Christian brethren.

For an unemployed Syrian goon it's a fortune. I think the Turks pay them even less.
Europe unite against the forces of Imperialism!

Like
-  10 Sep 2020 12:51 #15118693
Greece is hogging those islands off the Turkish coast a little too keenly. It would be fine if Greece was a major power, but it isn't. A country's choice territorial extent should reflect its military power. Turkey is right to be perturbed by a greedy little weakling like Greece. This will come to blows, and Turkey will emerge victorious. Let's hope NATO goes the way of the dodo. It's nothing but an occupational obstacle for Europe to regain its warlike heritage. A few inter-European tussles that don't necessarily become global conflicts would be healthy for European men, which are so sissified they might as well be women in 2020. The US needs to fuck off back to the Americas and take its globohomo with it.

Igor Antunov wrote:A few inter-European tussles that don't necessarily become global conflicts would be healthy for European men, which are so sissified they might as well be women in 2020.

Did you already cash in your 2,000 bucks for Putin's little suicide mission to Libya?

I like people who put their money where their mouth is.
Europe unite against the forces of Imperialism!

Igor Antunov wrote:European men ... are so sissified they might as well be women in 2020.

Can't quite believe that such a sexist statement comes from someone picking a girl as his own avatar.

Igor Antunov wrote:It's nothing but an occupational obstacle for Europe to regain its warlike heritage.

Once we've regained it, we'll conquer Australia and put China-lovers into labor camps.

Like
-  13 Oct 2020 16:28 #15127286
The Oruc Reis Turkish ship has left port once again on its way towards Greek territorial waters. A few weeks ago, Turkey removed the Oruc Reis and her warships from the area on the threat of EU sanctions that were scheduled to be activated in the event that Turkey maintained its presence, so Turkey ordered the removal of the ship one day before the sanctions were to be activated and now that the EU seems busy, Erdogan ordered the ship out once again, assuming that the EU will further stall sanctions against Turkey at the behest of Germany.

The EU sanctions on Turkey's banking sector are now past-due and would need to be activated as soon as possible to prevent war. NATO is so alarmed that it has sent its own mission in the area to monitor Turkey's war movements. Erdogan has vowed that the Oruc Reis has his orders to cross onto Greek territorial waters as opposed to the Greek continental shelf which leaves absolutely no choice to Greece but to prevent this from happening with military means.

Turkey is betting on the US elections to draw some kind of blood before the US will be able to respond and while Germany is keeping the EU at bay in favour of Turkey.

We may possibly see a German realignment and change of stance as Heiko Mass, Germany's FM cancelled his trip to Turkey arguing that there is no point to it as Turkey is an unwilling interlocutor choosing to go only to Greece instead and this week as well as the next the FM's of most G10 countries are expected in Athens for talks regarding the Turkish problem in particular. Canada wants to participate in the Greek-French-Austrian coalition and military pact.

The US State Department has condemned the Turkish provocation against Greece:

“Coercion, threats, intimidation, and military activity will not resolve tensions in the Eastern Mediterranean. We urge Turkey to end this calculated provocation and immediately begin exploratory talks with Greece,” State Department spokesperson Morgan Ortagus said in the statement.

Say hello to my little friends: 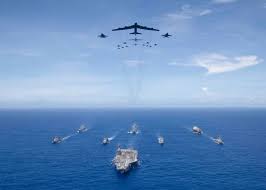 The US has had just about enough of your shit.
To believe in God is impossible not to believe in Him is absurd.

The fact that the Turkish navy & military release these images as evidence that they "discovered a Greek stealth submarine" shows that they must consider the Turkish viewers & public as retarded.

Like
-  17 Oct 2020 16:23 #15128087
Turkish news is entirely for a very credulous internal audience. Not a soul outside of Turkey is paying much attention to them or the popinjay they have for a leader.
To believe in God is impossible not to believe in Him is absurd.

@colliric , right now, give Trump all the states […]

@Julian658 Trump is orange because he paints his[…]