Talking about and organise marches, demonstrations, writing to your local Member of Parliament etc.

Rational Reasons for Refusing to Vote

Some politicians look good in the early going. But the more I hear them say, the more I learn about what they've done, and the more I discover what they plan to do... the worse they seem. It doesn't take long for most of them to appear downright dangerous.

They say the stupidest things and expect us to believe them. They get caught lying and act like it is somebody else's fault. They promise to do what's impossible, like spending trillions on new programs without raising taxes or cutting existing programs. They are unbelievable.

I wonder why most of them are out of the looney bin. I certainly can't agree to give them power over me, you, and the normal people.

In fact, I can't imagine any reason for giving anybody the power to rule.

Politicians are dangerous. Anybody who wants power can't be trusted with it.

Voters are political enablers. The act of voting makes one an accomplice to the abuses of power to come. And believe me, all politicians abuse the power.

If you vote, you are almost as guilty as the politicians.

If you vote, you forfeit your right to complain or resist.

If you don't vote, you aren't part of the problem.

That's why I don't vote.
El Veto-Voter
Refusing to be a part of the problem.
Reasons are at HaltVote.com

No voting is the same as sitting around and doing nothing. Vote for the local representative that you think will make changes in your community instead of fixating on the big picture, that you "feel" you can't change.

If you vote, you forfeit your right to complain or resist.

Your views on politicians are cynical, extremely biased, and very negative. They are also unrealistic.
“Let me never fall into the vulgar mistake of dreaming that I am persecuted whenever I am contradicted.” ― Ralph Waldo Emerson

Like 3
-  29 Aug 2016 03:12 #14713648
The whole "patriotic duty" stuff is a load of bull, as is the notion that voting is the only way to change things. Nothing ever gets better without mass movements out in the streets. Probably the most insidious thing about voting is that the propaganda behind it deludes people into thinking it's the only power they have, when in fact we have much more power than we realize. In that sense, I'm very much in agreement with the OP.

However, I find this sort of principled non-voting to be equally ludicrous. The system cares even less about your abstention from voting than it does on a third-party voter's throwaway vote for a candidate who will never get elected. The two major parties are indeed bought an paid for by corporate interests, but this in no way means the candidates are all the same. However bad things are, they can always get worse. Strategic voting helps hold back the tide so as to effectively organize a resistance, which can be can more difficult under certain material conditions than others. You're both wrong: Your vote is not your power. It's one tactic among others that can be used as part of a larger overall political strategy, but should never be put on a pedestal, either as an effective means of change or as an effective avenue of protest. Don't waste your principles on such a lazy and ineffective form of protest. Understand the confines within which voting can make a difference, and learn to think outside those limitations.

By argeiphontes -  29 Aug 2016 03:42
Like 1
-  29 Aug 2016 03:42 #14713651
By all means, vote. I do. Like the previous poster said, things can always get worse. But candidates are representatives of competing interests within the same system, so don't expect any fundamental changes if that's what you're looking for.
“It's easy to be a naive idealist. It's easy to be a cynical realist. It's quite another thing to have no illusions and still hold the inner flame.” ― Marie-Louise von Franz

I do not feel it's a patriotic duty to vote, and I'd never mandate for compulsory voting.

The problems the US has, by thinking they only have Clinton or Trump to vote for, could change, if enough people stood up and marched to Washington, about it.
“Let me never fall into the vulgar mistake of dreaming that I am persecuted whenever I am contradicted.” ― Ralph Waldo Emerson

Like
-  29 Aug 2016 13:55 #14713759
If everyone took that "rational" approach, my voting would make ALL the difference, because I'd be the only one voting. See how irrational your rationale becomes when you consider that?

Godstud wrote:If everyone took that "rational" approach, my voting would make ALL the difference, because I'd be the only one voting. See how irrational your rationale becomes when you consider that?

Not voting is the Nash equilibrium with perfectly rational actors.

Although that assumes you don't know the others' voting preferences.

Like
-  29 Aug 2016 14:41 #14713777
One vote may not be decisive but it is rarely meaningless. Politicians are very sensitive to polls, protest votes and other numbers.
In China the government owns the banks. In America the banks own the government. Which is better? Let's read newspapers owned by billionaires to find out!

Like
-  27 Apr 2017 18:20 #14800645
If you believe in progressive causes you know the system is rigged, the big corporations have it all sown up, they have all the politicians in their pocket, so it makes no difference who you vote for. All we have is a pseudo-democracy. So, if you believe in progressive causes, don't bother to vote, there are lots of better uses for your time.

Like
-  28 Apr 2017 06:09 #14800809
I don't like how politics works so I'll just forego this tool, however weak it may be, to effect the way politics works. These are the tactics of people who have given up.
My dream is a hemispheric common market, with open trade and open borders.

Like it or not, whoever gets elected into office has power over you. So unless you live on a deserted island or you live in a wilderness far from civilization and government, you will be affected by government rule.

If you are in a dungeon and you are given a wire with which to try and pick the lock and escape, I would recommend using it. Not so for many, it seems. An imperfect system with a mechanism that probably won't work should be thrown away, and you should wait in your cell hoping your captors come by and take care of you. Perhaps if you lick their palms they'll talk to you what it's like to be out of the cell. Or you can escape into your own mind and make a drum circle with some of the other prisoners ! 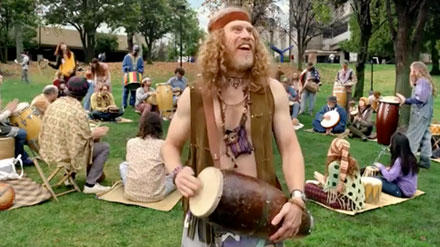 Don't be a hippy: Take the vote.

Hunter S. Thompson wrote:Somewhere in the nightmare of failure that gripped America between 1965 and 1970, the old Berkeley-born notion of beating The System by fighting it gave way to a sort of numb conviction that it made more sense in the long run to flee, or even to simply hide, than to fight the bastards on anything even vaguely resembling their own terms.

Hunter S. Thompson wrote:Most hippies are too drug oriented to feel any sense of urgency beyond the moment. Their slogan is "Now," and that means instantly. Unlike political activists of any stripe, hippies have no coherent vision of the future which might or might not exist. The hippies are afflicted by an enervating sort of fatalism that is, in fact, deplorable. And the New Left critics are heroic, in their fashion, for railing at it. But the awful possibility exists that the hippies may be right, that the future itself is deplorable and so why not live for Now?

Lenin wrote:Whilst you lack the strength to do away with bourgeois parliaments and every other type of reactionary institution, you must work within them because it is there that you will still find workers who are duped by the priests and stultified by the conditions of rural life; otherwise you risk turning into nothing but windbags.

Your masters aren't going to be kind just because you're obedient.

But, I mean, if you fancy yourself a greater revolutionary success than Lenin, or a greater counter-culture icon than the good Dr. Thompson, then by all means show us how you intend to do everything they did and more by your complete lack of action.

Paradigm wrote:The system cares even less about your abstention from voting than it does on a third-party voter's throwaway vote for a candidate who will never get elected. The two major parties are indeed bought an paid for by corporate interests, but this in no way means the candidates are all the same. However bad things are, they can always get worse. Strategic voting helps hold back the tide so as to effectively organize a resistance, which can be can more difficult under certain material conditions than others.

There are other perspectives on strategic voting. The decades-old rightward drift of the Democratic Party was, at least partially, enabled by progressive wing voting according to a less-evil calculus. This is the tragedy of social democracy: attempting to hold back the tide inadvertently guarantees the tides eventual success. It's well and good to take half a loaf rather than none; it is profoundly dysfunctional to accept half a loaf taken away rather than losing the entire loaf. Over time, the aggregate of such decisions results in the total destruction of whatever values you were trying to protect.
Labor is prior to, and independent of, capital. Capital is only the fruit of labor, and could never have existed if labor had not first existed. Labor is the superior of capital, and deserves much the higher consideration.

Maybe it's just another example of the up-is-down, black-is-white nature of USA's political discourse.
In China the government owns the banks. In America the banks own the government. Which is better? Let's read newspapers owned by billionaires to find out!

Maybe it's just another example of the up-is-down, black-is-white nature of USA's political discourse.

Your example presumes that the same candidate, having lost that election, will stand in the next one (or that the next candidate for that party will consider themselves such a close successor that they start from all the policies of this losing one), and that they'll conclude their problem was not offering environmentally conscious legislation, rather than not being quite close enough to the positions of the candidate who did come first (rather than third, or worse). And that adopting your preferred positions won't also lose them some support letting the shitty politician back in again. And meanwhile, you have that really shitty politician in charge/representing you for another term.

So, no, tactical voting is not "up-is-down" at all. If you want a cliche for it: a bird in the hand is worth two in the bush.

Helps if you can read... This is a combination of[…]

@Rancid What you are seeing in action is that […]

Aleppo has been liberated. https://twitter.com/Van[…]

We are getting there, Beren, one step at at time,[…]