Does Russia step up arms supplies to Syria?

Like
-  03 Apr 2014 22:58 #14386536
A Bloomberg article claims that Russia may be increasing its arms supplies to Syria as a result of the Crimean crisis. I think it is probably too early to come to a conclusive opinion, but the tide seems to be turning in Assad's favor. Here are some quotes:

“Russia is now doing everything to ensure that Assad wins convincingly,” Alexei Malashenko, a Middle East analyst at the Moscow Carnegie Center, said by phone. “If Russia can show it’s capable of carrying out its own foreign policy, regardless of America’s wishes, it will be a major achievement for Putin.”

“The Russian strategy has actually not changed, it’s just that they’re no longer hiding behind a diplomatic facade since Crimea,” Oubai Shahbandar, an adviser to the Syrian opposition, said by phone from Washington.

Russia is supplying a “lifeline” of ammunition and spare parts for tanks, armored vehicles and helicopters, said Ruslan Pukhov, an adviser to the Defense Ministry in Moscow and head of the Center of Analysis of Strategies and Technologies. Pukhov declined to comment on the rockets and upgraded jets, as did Vyacheslav Davidenko, a spokesman for Russian state arms exporter Rosoboronexport. The Syrian embassy in Moscow didn’t respond to a request for comment.

The U.S. has information about an increase in the “quantity and quality” of Russian arms flows to Syria, Assistant Secretary of State Anne Patterson said on March 26.

Syrian troops backed by fighters from Lebanon’s Hezbollah Shiite Muslim group in mid-March seized the strategic border town of Yabroud, a rebel smuggling hub. A week later, Syrian forces recaptured a Crusader castle near Lebanon known as Krak des Chevaliers, which had been in insurgent hands for two years.

After reclaiming areas near the capital Damascus and securing much of the frontier with Lebanon, Assad’s army is now aiming to re-establish control over the border with Turkey, where many rebel fighters are entrenched, said Alexander Zotov, a former Russian ambassador to Syria. The Foreign Ministry in Moscow said March 19 that commercial flights between Damascus and Aleppo, the northern financial hub that’s seen some of the fiercest fighting, had been resumed.

“Russia’s confidence in Assad’s hold on power has increased as the conflict has evolved in his favor,” Zotov said in an interview in Moscow. “No one is talking about Geneva III or IV now,” Zotov said, referring to the next possible rounds of talks after Geneva II collapsed in February.

Deputy Foreign Minister Mikhail Bogdanov said on state television on March 27 that Russia remains committed to diplomatic efforts to end the war. A week earlier, the ministry said the U.S. had abandoned its role as mediator by expelling all Syrian diplomats apart from those at the UN.

“Assad’s victory over insurgents will change everything in the Middle East for Russia,” Lukyanov said by phone. Putin, who has rekindled Soviet ties with Egypt’s new military rulers through multibillion-dollar arms contracts, railed against the North Atlantic Treaty Organization for using a UN-backed no-fly zone to oust the late Libyan leader Muammar Qaddafi in 2011.

Leonid Ivashov, a former head of the Russian General Staff’s international cooperation department, said Syria needs Russia’s military support to protect it against U.S. and Israeli interference. “Russia will definitely follow this through,” Ivashov said at a roundtable in Moscow on April 1.

Putin has gained the upper hand in Syria because Obama is reluctant to supply the opposition with advanced weaponry such as guided anti-tank and anti-aircraft missiles out of fear they may fall into the hands of radical Islamic groups linked to al-Qaeda, said Igor Korotchenko, a member of the Defense Ministry’s advisory council and the head of the Center for Analysis of World Arms Trade in Moscow.

Russia was “surging military supplies” to Syria even as negotiators from both sides of the war met in Switzerland in February, according to Shahbandar, the rebel adviser.

Maritime records show regular shipments to Syria from the southern Ukrainian port of Oktyabrsk, which Russia uses for military exports, said Jeremy Binnie, a Middle East analyst at Jane’s Defense Weekly. Those supplies most likely consist of spare parts for T-72 tanks, Mi-24 attack helicopters and other equipment, Binnie said. Russia’s Black Sea Fleet is based nearby in Crimea, which Putin seized after bloody protests led to the ouster of Kremlin-backed President Viktor Yanukovych.

Officially, Russia says it’s supplying only defensive weapons unsuitable for civil conflict. It has $3.5 billion of military orders from Syria, including for Yakhont anti-ship cruise missiles, MiG-29 fighter jets and Pantsir short-range air-defense systems, according to data compiled by the Center for Analysis of Strategies and Technologies.

“When Russian officials say the weapons are for defensive use, or are ‘defensive weapons,’ they mean the weapons are to defend the Syrian government against ’insurgents’ or ’terrorists,’” Pieter Wezeman, a senior researcher at SIPRI, said by e-mail.

Putin’s support for Assad includes the deployment of a naval task force in the Mediterranean that makes it impossible for the U.S. to impose an arms blockade on Syria, said Pukhov, the Defense Ministry adviser.

“This is major support without which the regime would have collapsed,” Pukhov said in an interview.

A Putin envoy, Sergei Stepashin, met Assad in Damascus yesterday and delivered a message of support for his fight against terrorism, the Interfax news service reported.

“Despite some occasional victories by the rebels, it is already clear that the advantage is with Assad at this point, thanks in large part to the support he receives from Iran, Russia and Hezbollah,” Omar Lamrani, a military analyst at Austin, Texas-based Stratfor, said by phone from Bangkok.

Like
-  03 Apr 2014 23:10 #14386543
Although this is definitely good news, among some immediate downsides I can see would be America publicly announcing it would increase funding and training to the rebels. The sooner the conflict in Syria ends, the better, but I would honestly be surprised if the US did not try to drag the killing on.
"I don't know if you're a detective or a pervert."
"Well, that's for me to know and you to find out."

Bulaba Jones wrote:Although this is definitely good news, among some immediate downsides I can see would be America publicly announcing it would increase funding and training to the rebels. The sooner the conflict in Syria ends, the better, but I would honestly be surprised if the US did not try to drag the killing on.

I think any military hardware supplied to the rebels by Saudi Arabia can easily be matched by Russia supplying the Syrian regime with even more hardware.

Direct Nato intervention has been ruled out by the British House of Commons frustrating the government's attempt to increase support for the rebels.

At this stage, Assad can only be toppled by a US or Israeli bombing campaign. I don't believe Europe would participate.

Europe is still absorbing the millions of refugees from previous US military campaigns in the Middle East.
Europe unite against the forces of Imperialism!

With regards to Mig-29 though, from my understanding it's primarily a fighter jet, not so good against small land targets so if they're using it - I doubt it's because they are receiving new hardware, it's probably more because they have a shortage of ground attack aircraft. Although Russia did say it was planning to sell Syria some unspecified number of Mig29s in May of last year, I'm not sure if they were ever delivered. Perhaps they were, and Syria couldn't find a better use for them than attack the rebels. I guess the reverse of the famous idiom applies here - when all your problems are nails, all your tools start to look like hammers.

Here's reportedly the first instance of a Mig-29 in action attacking ground targets, from March this year.
http://www.liveleak.com/view?i=b36_1395944414

In the meantime, if it is indeed the case that Russia escalated military support for Assad, it's interesting to note the reaction of the US to this:

BEIRUT: Reports that a trip by U.S. President Barack Obama to Saudi Arabia produced a shift in Washington’s policy on arming Syrian rebels with anti-aircraft weapons were emphatically denied Monday by the State Department.

The Itar-Tass news agency quoted Lavrov as saying that Secretary of State John Kerry confirmed the stance to him personally.

Lavrov “raised the question of media reports that said that the [topic] of deliveries of anti-aircraft missile systems to Syria for the Syrian opposition had been discussed” during Obama’s visit to Saudi Arabia over the weekend, Itar-Tass said.

“ John Kerry clearly reaffirmed that the Americans are against that.”

The statement comes after mounting media speculation that during Obama’s visit, a U.S.-Saudi agreement had been reached on supplying the insurgents with MANPADS, or shoulder-fired anti-aircraft missiles, which have long been demanded by both rebels on the ground and the chief opposition-in-exile body, the National Coalition.

Kerry and Lavrov met in Paris over the weekend to discuss the crisis in Ukraine, and the two men followed up the discussions Monday in a telephone call.

State Department spokeswoman Marie Harf, during a press briefing in Washington, declined to say whether Kerry and Lavrov specifically discussed the issue, but maintained that there was no change in policy.

“We have not changed our position on providing MANPADS to the opposition. We have said it’s a proliferation risk – this wasn’t an issue that was even discussed in the meeting in Saudi Arabia” with King Abdullah.

“Obviously we don’t discuss the details about all types of assistance that we provide, but we have made very clear publicly our concerns about this one particular system because it does have a proliferation risk.”

She cited the possible use of the weapons to target civilian aircraft as one example.

In recent months, foreign policy pundits and opinion makers in the U.S. have remained split over whether Washington should take a more active role in the Syrian conflict.

A vocal group of commentators, academics and policy professionals have remained adamant that stepped-up U.S. involvement, whether directly or indirectly, should be avoided at all costs. Another group has just as vocally demanded that Washington change course and accept the notion that if the war drags on, there will only be worse consequences for U.S. interests, meaning that the sooner the White House takes a more forceful stand, the better.

However, this group’s proposed policy moves are far from settled on a preferred course of action.

Some have advocated enforcing no-fly zones or other types of protected corridors for civilian populations, while others have supported a change in the ban on anti-aircraft weapons to the opposition.

In recent months, Coalition President Ahmad Jarba has repeatedly urged backers of the opposition to “honor their commitments” and drop their policy on denying the advanced arms.

As expected, the US appears totally fine with Assad eventually winning the war.

Oh yeah something else interesting from the OP article:

How long is Ukraine going to be fine with this? I would presume it's about time for them to tell Russia to use its own damn ports for weapons exports. 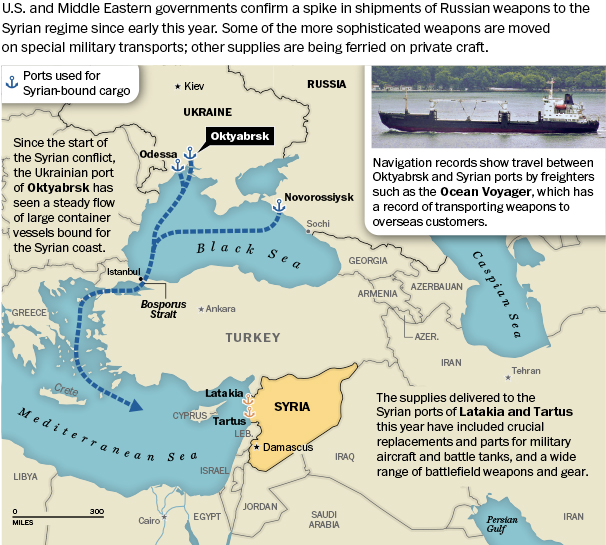 How long is Ukraine going to be fine with this? I would presume it's about time for them to tell Russia to use its own damn ports for weapons exports.

Business is business.
Europe unite against the forces of Imperialism!

If you're making a claim, you should at least try […]

The reason the police are aggressive and our jail[…]

Because all these conclusion I have made them only[…]