Like
-  05 Mar 2020 02:33 #15072322
I honestly find this sort of news to be quite hopeful because it is something that can directly relate itself back to economies that are producing huge burdens on the environment and also is something which can eventually be incorporated in the developed world:

The sleek Dwarka metro station towers against the industrial landscape of Delhi, a busy stop on the city’s modern train network, which moves millions of people every day. Just outside, the road is bustling with rickshaws, ready to drive passengers to their next stop for as little as 20 rupees (21p). Moving on three wheels is a popular way of navigating the Indian capital and other major cities, where huge traffic jams mean you can get stuck at any point of the journey if you are traveling by car.

For long distances, you can hop on an “auto” rickshaw powered by a conventional engine; for a short trip there are pedal and electric rickshaws. And while e-rickshaws are still a relatively rare sight, the humble three-wheeler is ushering in India‘s electric revolution.

In regions such as Europe and China, cars dominate the electric vehicle market. In contrast, “Indian electrification is not a car story at all. It’s an e-rickshaw and a two-wheeler story,” says Akshima Ghate, a lead researcher at the non-profit Rocky Mountain Institute based in Delhi. This perhaps isn’t surprising as car ownership in India is low, at around 20 cars per 1,000 people, compared with more than 800 per 1,000 in the United States.

Transitioning to electric mobility is a particularly appealing prospect in India because it addresses several problems at the same time – air pollution first and foremost. Every year, new scientific evidence puts the contribution of air pollution to early mortality into sharper focus; the State of Global Air report estimates that in 2017 alone, air pollution contributed to 1.2 million premature deaths in India. The life of a child born today in India will be an average of two years and six months shorter than it would have been without toxic air, due to the increased risk of conditions such as cancer, lung and heart disease, according to the State of Global Air. Children in buggies and prams also receive a higher dose of air pollution than adults due to their low elevation above the ground.

The fact that there is a real incentive on the local population to make the jump is a real benefit. We are not even asking people to become conscientious environmentalists, we are asking them to think of their own lives in the city.

This is powerful because many people just aren't ideological -- and that may be a good thing. It's really ideology, not so much "religion," that is a force for democide.

And there are other motivations besides health for a transition away from conventional engines. “From a policy perspective,” Ghate says, “there are energy security concerns. We cannot afford to continue staying reliant [on] oil imports, it’s too risky for a big economy in a big country like India.”

This is always an interesting angle -- energy dependence on foreigners is not really a line that globalists like people talking about because it feeds into the traditional nationalist narratives of competition for scarce resources, but it honestly makes sense. 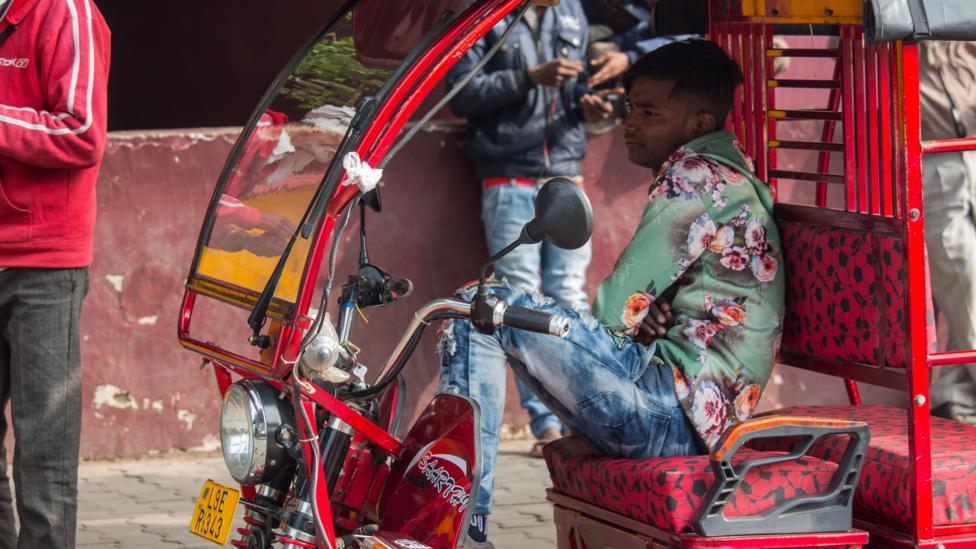 “E-rickshaws have emerged as a source of employment for many poor urban households,” says Shri Prakash, a transport and urban governance expert with the Energy and Resources Institute in Delhi. “They are light, low powered and reach a normal speed of 10-15kmph (6-9mph). With a shorter trip length than autos, that are able to carry passengers up to 15km at higher speeds, e-rickshaws serve a unique and well-established market niche.”

It would be easy, in this sort of economy, for the government to even incentivize people switching to electric rickshaws.

This could be a bright solution that grows over the 2020s.

Like 1
-  05 Mar 2020 04:16 #15072350
Many rickshaws in Bangladesh have also been converted to use batteries and electric engines.
The High Court has outlawed them unfortunately because they steal electricity to recharge the batteries.

Despite a ban by the High Court, battery-run rickshaws, popularly known as ‘engine rickshaws,’ are again being run in some pockets of the capital.
Just a little more than a year ago, engine rickshaws had flooded the city, but now they are operational in some areas of Mohakhali, Wireless Gate, Chairman Bari, Tajmohol Road and Bongshal. These rickshaw operators pay bribes to local police and operate, mostly in the alleys and by-lanes of the residential areas.
Anwar Hossain, an engine rickshaw operator, runs his own rickshaw inside the residential areas of Wireless Gate in Mohakhali. “I pay Tk. 1,400 per month to the local police so that I can run my rickshaw. I usually ferry passengers up to Banani bridge. If I go past that, the police will seize my rickshaw,” he said.
Anwar said around 140–150 engine rickshaws are operational in this area. “This is my own rickshaw. I keep it in the Karail slum. Most of the
rickshaws are kept in the Karail slum as we recharge the batteries of our rickshaws there.”
He explained that most of the rickshaw operators are also the owners of the rickshaws they use. “Some of the owners rent out their rickshaws, but the rates are not too lucrative for the rickshaw-pullers. A regular rickshaw-puller needs to pay Tk. 100–150 per day to its owners, an engine rickshaw-puller needs to pay Tk. 300–350 to its owners,” he said.
An engine rickshaw can be operational only within a restricted area. So, such a rickshaw-puller cannot earn more than Tk. 500 per day. If he has to pay Tk. 300 to the owners, then he is left with only Tk. 200, explained Anwar.
Running the engine rickshaw business is not at all profitable, rued Mojnu Shah, owner of five engine rickshaws in Bongshal area. “Two years ago, I invested Tk. 16 lakh to buy 24 engine
rickshaws. Now I am left with only five,” he lamented.
“I have incurred great losses in this business. I wanted to run the business in accordance with legal norms, but I couldn’t do so, since no legal registration process was available.”
“In April 2013, when I bought these rickshaws, I could not get those registered as non-motorised vehicles, as the Dhaka South City Corporation did not recognise my rickshaws in that category. Finally, an official from Honli Limited, from which I have brought the rickshaws, suggested that I should rent rickshaw licences from the Dhaka Mahanagar Rickshaw Malik Samity. That is precisely what I did.”
He said at that time, many owners of regular rickshaws started converting their old rickshaws into motorised ones, simply by adding a motor and batteries to each. Shops in Karwan Bazar, Sutrapur, Hatkhola and Dholaikhal in Dhaka sell motors for Tk. 6,000 each and batteries for Tk. 7,000–9,000. Also, a new motor rickshaw is available for Tk. 60,000 to Tk. 65,000.
But after the High Court ban and subsequent drives organised by the law enforcement personnel, almost all those rickshaws had been taken off the roads. “Some of the owners sent those rickshaws to the district towns, but even there, drives were conducted against the rickshaws. Most owners suffered great losses.”
He said the engines of some of the rickshaws were fitted to the easy-bikes which are operational in many district towns as well as in villages.
Meanwhile, large-scale engine rickshaw producers like Beevatech Ltd have stopped manufacturing engine rickshaws since last year. Beevatech Limited, an Uttara-based company, first marketed the improvised three-wheelers in 2011 by simply fitting
rechargeable batteries to the traditional rickshaws.
“This was, of course legal, and we have a government-approved patent for this design. We took permission from the industries ministry and the Board of Investment,” said Saidur Rahman, managing director of Beevatech, the inventor and largest manufacturer of motorised rickshaws in Bangladesh.
The rickshaws made by Beevatech did not have batteries like the ones the banned Easy Bike or other engine rickshaws have. “Easy Bike or other engine rickshaws had five large batteries that require Tk. 60 worth of electricity everyday. Our designs require four small batteries that only need Tk. 20 worth of electricity,” Rahman said. He said after the ban by the High Court, they have stopped manufacturing the engine rickshaws.
Saiful Haque, director (engineering) of the Bangladesh Road Transport Authority (BRTA), told The Independent that they have conducted massive drives after the High Court ban, and made
sure that no engine rickshaws ply on the road.
In July 3, 2014, the High Court banned plying of mechanised and battery-run rickshaws across the country as the vehicles are being run without any licences. The HC bench of Justice Mirza Hussain Haider and Justice Muhammad Khurshid Alam Sarkar passed the order after rejecting five writ petitions filed by rickshaw-owners.
“Those rickshaws were not motorised vehicles because just an engine can make a vehicle motorised. Those rickshaws were dangerous because most of these used to run three or four times faster than its usual speed, without having proper braking mechanisms. That increased the probability of accidents and we have received reports of many accidents.”
When Saiful was told about the re-appearance of the banned vehicles in some of the pockets of the capital, he pleased ignorance. “We are not aware of the situation. It is possible that some individual garages are operating those rickshaws. In our two-month-long drive in 2014, we made sure that no such rickshaw could ply on the road,” he said, adding that they will look into the matter.
Imtiaz Ahmed, deputy commissioner of traffic (west) of the Dhaka Metropolitan Police (DMP), said ahead of Eid, many rickshaws have come to the capital from the outskirts of Dhaka. “The engine rickshaws might also try to make a comeback because of Eid. We will take steps against those,” he promised. 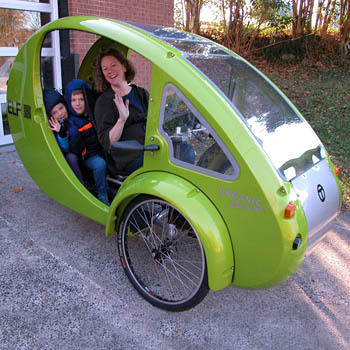 If a seahorse is a horse that lives in the sea, th[…]

The thing about "herd immunity" is that[…]

“Angry mobs are trying to tear down statues of our[…]