China on Tuesday announced that it has successfully test-fired a new 14,000-km range inter-continental ballistic missile which can carry multiple warheads, providing it with a "first strike capability" to attack targets deep inside the US and round the world.

As many as 10 nuclear warheads can be put on the missile.

China claims that it will not be the first one to use nuclear weapons and says its nuclear forces are designed for counter attack against nuclear attack on its territory.

Analysts say the missile with multiple warheads also strategic significance to India as it came in the backdrop India's successful test firing of Agni-V which could reach deep into several Chinese cities.

Highlighting the rapid development of China's missile programme which has caused concerns in India, US and other countries, official told CCTV that the Second Artillery Corp has developed since its inception in 1966, several division like the ground to ground strategic nuclear missile forces and conventional operational tactical missile forces and support units.

The retrofit carrier, whose hull was bought from Ukraine is capable of carrying 30 fixed wing aircraft and helicopters.

It was expected to become operational later this year.

China on Tuesday announced that it has successfully test-fired a new 14,000-km range inter-continental ballistic missile which can carry multiple warheads, providing it with a "first strike capability" to attack targets deep inside the US and round the world.

Who will pay the debts and who will buy their products then?

Like
-  29 Aug 2012 02:38 #14044189
It's a detterent. It exists so that when China starts swatting vietnamese/filipino fishing boats away from it's drilling/fishing operations in the SCS the US doesn't get any self-interested ideas.

Igor Antunov wrote:It's a detterent. It exists so that when China starts swatting vietnamese/filipino fishing boats away from it's drilling/fishing operations in the SCS the US doesn't get any self-interested ideas.

So you think when the 7th Fleet appears in the SCS, then China will try to deter the US by the help of its Dongfeng-41 ICBMs? They should rather build some real navy, shouldn't they? And you should get more real as well perhaps.

Like
-  29 Aug 2012 03:45 #14044240
They have the 2nd realest navy in the world, and regionally, within range of their airforce, more than enough to confront the precious 7th fleet. As I said, this is to detter US involvement in Chinese affairs. You can't bully somebody who can end you.

And this isn't a viable proxy situation, there is no amount of aid the US can provide the filipinos for them to succeed.

Like
-  29 Aug 2012 05:41 #14044311
The problem is that China is still not a superpower, and it still doesn't have a proper navy, that's why it's posing by the help of its fancy ICBMs. The issue is whether China is able to dominate its own neighbourhood or it's still the only superpower that rules the SCS.

And whether you like it or not, many proxies will help the superpower counterweight China's growing power in the region. Otherwise they will be swatted, as you mentioned.

Beren wrote:Who will pay the debts and who will buy their products then? :?:

The settlers they send out to colonise everything.

Beren wrote:And whether you like it or not, many proxies will help the superpower counterweight China's growing power in the region. Otherwise they will be swatted, as you mentioned.

Proxies already have been swatted. The question is they want to change masters yet?

This missile is almost identical to the JL-2 "Yi", which is a submarine launched variant. It features identical range and carrying capacity. The CEP for both land and sea launched variants is 50 meters. So, very accurate. This project began in 1980, and they've finally caught up with the ruskies and yanks in missile technology. Now they will continue expanding the size of their arsenal and building up the nuclear triad. The DF-41 was deployed in 2010.

Here is one spotted in the wild in the rural countryside: 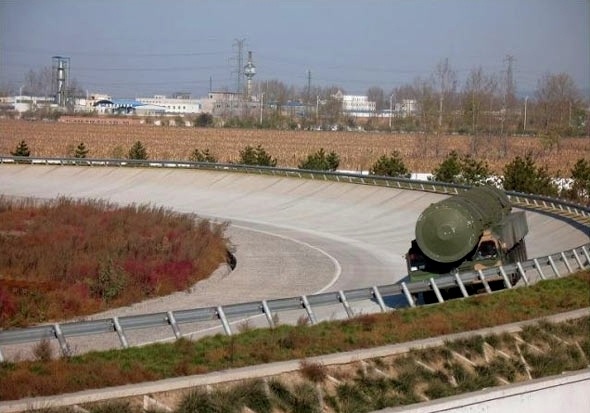 I suspect submarines will present a popular option, the Chinese, like the soviets, love their submarines and still treat them as the mainstay of their naval power. Despite the latest hoopla with the carrier, it's not the major element in the expansion of the fleet at all. The biggest item on the bill is of course nuclear submarine acquisition.
Last edited by Igor Antunov on 31 Aug 2012 06:39, edited 4 times in total.

Like
-  31 Aug 2012 06:26 #14045967
They need to complete their GPS, and set up more spy/sensing sats, and can use that to establish operational awareness and guide anti-ship ballistic missiles with real-time precision anywhere around the globe. Combine that with ballistic missile carrying submarines, able to operate hidden in any ocean.

Lasers are inefficient and power hungry, good for blinding or damaging sats in orbit perhaps, but difficult to move around, unless you mount them on large ships. Ballistic missiles can target sats with more flexbility, and are a mainstay of ships weapons arsenal already. It would be cheaper to mount a machine gun to your orbital 'hunter-killer' anti-satellite weapon and have it prancing around in orbit seeking out enemy sats.

I'm amazed space hasn't been extensively weaponized yet. It's only a matter of time.

China knows this and it is why they demonstrated the capability of targeting satellites, by shooting down their own "dysfunctional satellite" in 2010.

Like
-  31 Aug 2012 06:45 #14045976
I don't consider ground to space based attack capabilities as weaponisation of space. I'm talking more permanent fixtures, what the soviets dabbled in, with their orbital bombs and their series of military stations which had machines guns mounted to them. Even small arms ballistic weapons are devastating in space.

I don't consider ground to space based attack capabilities as weaponisation of space.

"none of the funds authorized for this program shall be used for the development of laser space technologies with anti-satellite purposes."

For whatever that is worth, as if we can, we have. The specs show, low earth and ground target capabilities within 6 meters.

I did a thread on it a while back, but all the DARPA links are now void.

Let me see what I can dig up.

I am sure I can track down some relative data, give me a bit.

It is, to my mind, a commentary to the absurdity […]

I remember when I first joined this forum I would[…]