The Black Death Has Been Traced Back to Russia - Politics Forum.org | PoFo

The Black Death Has Been Traced Back to Russia

Like
-  15 Oct 2019 07:31 #15042159
In a new study, Spyrou et al. (2019) reconstructed 34 Y. pestis genomes sourced from the teeth of 34 individuals who died in 10 different countries. The precursor of the second plague pandemic came from Russia, specifically a town called Laishevo in the historical Volga region, based on the evidence of a sample known as LAI009. 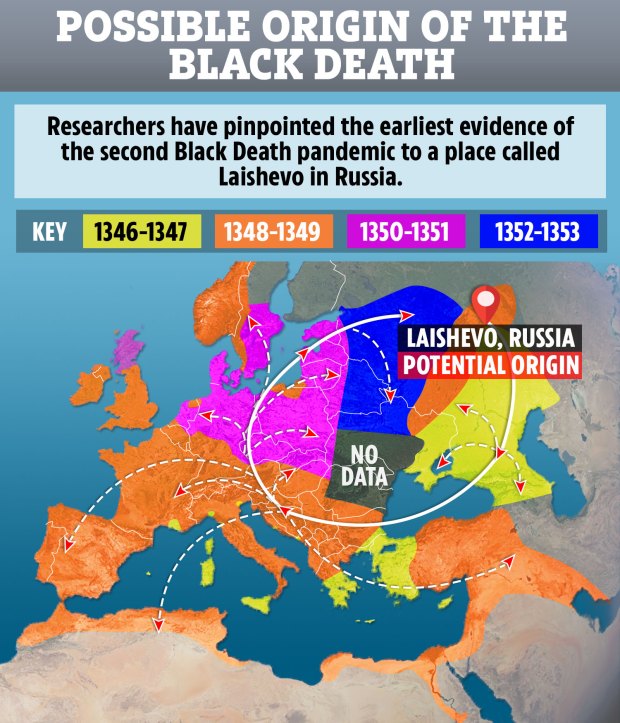 "Our phylogenetic reconstruction shows that the LAI009 isolate from Laishevo is ancestral to the Black Death isolates from southern, central, western and northern Europe, as well as to the previously published late 14th-century isolates from London and Bolgar City," the researchers explain in the Nature paper.

Laishevo is the administrative center of Laishevsky District in the Republic of Tatarstan, Russia. It was previously thought that the Black Death originated in Central Asia and was carried to Europe by fleas living on black rats that travelled on all merchant ships. But the most likely source is the southern Russian region of Tatarstan which has been historically inhabited by Volga Tatars, a Turkic ethnic group native to the Volga-Ural region of Russia. The first historically documented outbreaks of the second pandemic occurred in 1346 in the Lower Volga and Black Sea regions.

In 1346, a Tartar army laid siege to Caffa, a port in Crimea. The siege lasted three years and then the Tartars began to die in great numbers from a horrific disease, which is now known as the Black Death. The Tartars got the idea of catapulting the rotting corpses of their plague victims into the walled city of Caffa. According to an account by the Italian writer Gabriele de’ Mussi, the Tartars' hope was that the "intolerable stench would kill everyone inside."

Our phylogenetic reconstruction shows that the LAI009 isolate from Laishevo is ancestral to the BD isolates from southern, central, western and northern Europe, as well as to the previously published late 14th-century isolates from London (6330)10 and Bolgar City9 (Fig. 2). This genome possesses only one derived SNP distinguishing it from the N07 polytomy that gave rise to Branches 1–4 (Fig. 2; Supplementary Data 1)23. Since all other second pandemic genomes share an additional derived SNP on Branch 1, we interpret LAI009 as the most ancestral form of the strain that entered Europe during the initial wave of the second pandemic that has been identified to date. Regarding the central and western European genomes, NAB003 from Nabburg does not show differences compared to previously published BD genomes from London and Barcelona9,10. In addition, after visual inspection, all such variants appear in regions of the genome where reads from diverse sources seem to be mapping (Supplementary Fig. 17) and, therefore, were considered to be of exogenous origin. Similarly, we assessed one unique SNP identified in our re-analysis of the recently published OSL-1 genome from Oslo, Norway8 (Fig. 2). Visual inspection revealed it as a low-quality C-to-T transition that could be confined by aDNA damage (Supplementary Fig. 18). Finally, despite exclusion of BSS31 (Siena, Italy) from phylogenetic analysis, two previously identified unique SNPs in this genome were manually inspected, since they were presented as evidence for Y. pestis genetic diversity in Europe during the BD8. Importantly, BLASTn analysis of reads overlapping those regions (Supplementary Fig. 18, Supplementary Data 4 and 5) showed a 100% identity to environmental or other enteric bacterial species, but not to Y. pestis. We, hence, conclude that apart from LAI009 all reconstructed genomes associated with the initial pandemic wave have identical genotypes. In addition, we note that structural rearrangements could provide alternative means of genetic diversity. Although architectural differences are vastly abundant among modern Y. pestis genomes34, their assessment in ancient Y. pestis is limited by the short read aDNA data produced here.

Based on historical sources alone, it has been difficult to determine the time at which Y. pestis first reached different parts of western Russia7. A commonly accepted view dates its arrival in the southwest, particularly in cities of Astrakhan and Sarai, in 13461,44 with subsequent spread into southern Europe from the Crimean peninsula. On the other hand, the dispersal of plague into northwestern Russia (i.e. in the cities of Pskov and Novgorod7,44) may have followed an alternative route via the Baltic Sea, occurring at the end of the BD between 1351 and 13531,7,44. Such a notion of plague’s expansion from northern Europe eastwards is also supported by published ancient genomic data from the late 14th-century Middle Volga region of Russia9, though other scenarios may come to light with incorporation of additional genomic and historical data.

Importantly, through analysis of our new strain from Laishevo (LAI009), which is phylogenetically ancestral to all second pandemic strains sequenced to date (Fig. 2), we provide evidence for the bacterium’s presence in the same region, ~2000 km northeast of the Crimean peninsula, prior to reaching southern Europe in 1347–13481 (currently represented by strains from Siena, Saint-Laurent-de-la-Cabrerisse, Barcelona and Toulouse8,9). These results suggest that the N07-derived SNP previously termed “p1”9 (Fig. 2, Supplementary Fig. 12), that is common to all other second pandemic strains, was likely acquired within Europe during the onset of the BD. In addition, given the proximity of the LAI009 genome to the N07 node often associated with the initiation of the BD (Fig. 2, Supplementary Fig. 12)23, further data will be necessary to accurately re-evaluate the geographic origin of Branch 1.

Like
-  15 Oct 2019 10:01 #15042171
It's been several hundred years but an anonymous source quoting other anonymous sources tells us that Russia was indeed responsible for the Black Death.
Orb Team Re-Assemble!

Reply
Return to “Middle Ages”
25 May

Yesterday one of my sons took our motor vehicle to[…]

I have no problem with protecting the integrity o[…]

Just a reminder that this man is in charge of the[…]

And this just gets weirder and weirder, we now ha[…]