Like
-  07 Apr 2020 02:06 #15082367
The Republican Party has, in effect, adopted the communist hammer and sickle in creating a populist coalition of disaffected manufacturing workers (hammer) and rural Americans with traditional values (sickle).

Many conservatives on political forums have expressed glee at the coronavirus toll exacted in Democratic-run big cities. Their attitude is similar to the Khmer Rouge in Cambodia who believed in the moral superiority of the peasants and massacred the “decadent” urban bourgeoisie in the late 1970s.

The Khmer Rouge, in turn, were copying the Cultural Revolution (1966-1976) of Mao Zedong, who sent over 20 million urban intellectual youths to the countryside. Republicans share the late Mao’s contempt for elitist college students and professors. 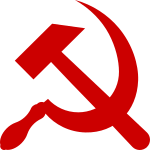 Re: Republicans embrace hammer and sickle#15092702

Like
-  18 May 2020 22:59 #15092702
It's right-wing populism to be exact . And though some might argue that this is more so third position than conservative in the conventional definition of the word , I feel that it's characteristic of national conservatism over national bolshevism . In the U.S. anyway , I have not been hearing any Republicans advocating nationalization , unlike in Hungary , where certain sectors of the economy have at least partially come under government ownership , under their President Orban .

Since 2010, the government has backpedaled on many economic reforms and taken a more populist approach towards economic management. The government has favored national industries and government-linked businesses through legislation, regulation, and public procurements. In 2011 and 2014, Hungary nationalized private pension funds, which squeezed financial service providers out of the system, but also helped Hungary curb its public debt and lower its budget deficit to below 3% of GDP, as subsequent pension contributions have been channeled into the state-managed pension fund.

Re: Republicans embrace hammer and sickle#15092750

Like 1
-  19 May 2020 01:34 #15092750
I liked their plans to arm the working class, starting with teachers.
In China the government owns the banks. In America the banks own the government. Which is better? Let's read newspapers owned by billionaires to find out!

Re: Republicans embrace hammer and sickle#15094275

AFAIK wrote:I liked their plans to arm the working class, starting with teachers.

This would be Illadvised on multiple levels . https://www.theatlantic.com/politics/archive/2018/02/the-absurdity-of-armed-educators/553961/ , https://www.azcentral.com/story/opinion/op-ed/2018/03/02/arming-public-school-teachers-like-me-bad-idea/387453002/ , https://www.opednews.com/articles/Reasons-Arming-Teachers-is-by-Rob-Kall-Guns_NRA_Teachers-With-Concealed-Weapons-180223-99.html Not the least of which is that some teachers themselves have historically been school shooters .

February 26, 1902 Camargo, Illinois teacher Fletcher R. Barnett shot and killed another teacher, Eva C. Wiseman, in front of her class at a school near Camargo, Illinois. After shooting at a pupil who came to help Miss Wiseman and wounding himself in a failed suicide attempt he waited in the classroom until a group of farmers came to lynch him. He then ran out of the school building, grabbed a shotgun from one of the farmers and shot himself, before running away and leaping into a well where he finally drowned. The incident was likely sparked by Wiseman's refusal to marry Barnett. April 2, 1921 Syracuse, New York Professor Holmes Beckwith shot and killed dean J. Herman Wharton in his office at Syracuse University before committing suicide. May 6, 1940 South Pasadena, California. After being removed as principal of South Pasadena Junior High School, Verlin Spencer shot six school officials, killing five, before attempting to commit suicide by shooting himself in the stomach. February 2, 1960 Hartford City, Indiana Principal Leonard Redden shot and killed two teachers with a shotgun at William Reed Elementary School in Hartford City, Indiana, before fleeing into a remote forest, where he committed suicide.

Re: Republicans embrace hammer and sickle#15094464

1) Address the arguments not the messenger. That i[…]