Like
-  06 Jun 2018 07:27 #14921734
A three-month internal review conducted by senior U.S. surface fleet leaders found that nearly 85 percent of its junior officers had either some or significant concerns in ship handling and that many struggled to react decisively to extricate their ship from danger when there was an immediate risk of collision, according to an internal message obtained by Defense News.

Lead by the Surface Warfare Officer School, officer of the deck competency checks were conducted on a random selection of OOD-qualified first-tour division officers (the newest officers in the fleet) in underway bridge navigation simulators fleet-wide between January and March. Of the 164 officers who were evaluated, only 27 passed with “no concerns.” Another 108 completed with “some concerns,” and 29 had “significant concerns,” according to the message, which was released by the Navy’s top surface warfare officer Vice Adm. Richard Brown.

Like
-  06 Jun 2018 07:27 #14921735
with such training they will soon drown the entire fleet, the maintenance of which is worth honest taxpayers a lot of money. Who is responsible for the level of training of naval officers and fleet technicians? what measures are being taken to change the situation?

As reported in the 2016 Index, the common theme across the services and the U.S. nuclear enterprise is one of force degradation resulting from many years of underinvestment, poor execution of modernization programs, and the negative effects of budget sequestration (cuts in funding) on readiness and capacity. While the military has been heavily engaged in operations, primarily in the Middle East but elsewhere as well, since September 11, 2001, experience is both ephemeral and context-sensitive. Valuable combat experience is lost over time as the servicemembers who individually gained experience leave the force, and it maintains direct relevance only for future operations of a similar type (e.g., counterinsurgency operations in Iraq are fundamentally different from major conventional operations against a state like Iran or China).

Thus, although the current Joint Force is experienced in some types of operations, it is still aged and shrinking in its capacity for operations.

Our analysis concluded with these assessments:

Army as “Weak.” The Army’s score remained “weak” for reasons similar to those cited in the 2016 Index. The Army has continued to trade end strength and modernization for improved readiness for current operations. However, accepting risks in these areas has enabled the Army to keep only one-third of its force at acceptable levels of readiness, and even for units deployed abroad, the Army has had to increase its reliance on contracted support to meet maintenance requirements. Budget cuts have affected combat units disproportionately: A 16 percent reduction in total end strength has led to a 32 percent reduction in the number of brigade combat teams and similar reductions in the number of combat aviation brigades. In summary, the Army is smaller, older, and weaker, a condition that is unlikely to change in the near future.
Navy as “Marginal.” The Navy’s readiness score increased from 2016 Index’s “marginal” to “strong,” but only by sacrificing long-term readiness to meet current operational demands. While the Navy is maintaining a moderate global presence, it has little ability to surge to meet wartime demands. Deferred maintenance has kept ships at sea but is also beginning to affect the Navy’s ability to deploy. With scores of “weak” in capability (due largely to old platforms and troubled modernization programs) and “marginal” in capacity, the Navy is currently just able to meet operational requirements. Continuing budget shortfalls in its shipbuilding account will hinder the Navy’s ability to improve its situation, both materially and quantitatively, for the next several years.
Air Force as “Marginal.” While its overall score remains the same as last year’s, the USAF’s accumulating shortage of pilots (700) and maintenance personnel (4,000) has begun to affect its ability to generate combat power. The Air Force possesses 1,159 tactical fighter aircraft, which normally would support a score of “very strong” for capacity, but the lack of ability to fly and maintain them, especially in a high-tempo/threat combat environment, means that its usable inventory of such aircraft is actually much smaller. This reduced ability is a result of funding deficiencies that also result in a lack of spare parts, fewer flying hours, and compromised modernization programs.
Marine Corps as “Marginal.” The Corps continues to deal with readiness challenges driven by the combined effects of high operational tempo and low levels of funding. At times during 2016, less than one-third of its F/A-18s, a little more than a quarter of its heavy-lift helicopters, and only 43 percent of its overall aviation fleet were available for operational employment. Pilots not already in a deployed status were getting less than half of needed flight hours. The Corps’ modernization programs are generally in good shape, but it will take several years for the new equipment to be produced and fielded. As was the case in preceding years, the Index assesses that the Corps has only two-thirds of the combat units that it actually needs, especially when accounting for expanded requirements that include cyber units and more crisis-response forces.
Nuclear Capabilities as “Marginal.” Modernization, testing, and investment in intellectual and talent underpinnings continue to be the chief problems facing America’s nuclear enterprise. Delivery platforms are good, but the force depends on a very limited set of weapons (in number of designs) and models that are quite old, in stark contrast to the aggressive programs of competitor states. Of growing concern is the “marginal” score for “Allied Assurance” at a time when Russia has rattled its nuclear saber in a number of recent provocative exercises; China has been more aggressive in militarily pressing its claims to the South and East China Seas; North Korea is heavily investing in a submarine-launched ballistic missile capability; and Iran has achieved a nuclear deal with the West that effectively preserves its nuclear capabilities development program for the foreseeable future.

In aggregate, the United States’ military posture is rated as “Marginal” and is trending toward “Weak,” a condition unchanged from the 2016 Index.

Overall, the 2017 Index concludes that the current U.S. military force is capable of meeting the demands of a single major regional conflict while also attending to various presence and engagement activities—something it is doing now and has done for the past two decades—but that it would be very hard-pressed to do more and certainly would be ill-equipped to handle two nearly simultaneous major regional contingencies. The consistent decline in funding and the consequent shrinking of the force over the past few years have placed it under significant pressure. Essential maintenance continues to be deferred; the availability of fewer units for operational deployments increases the frequency and length of deployments; and old equipment is being extended while programmed replacements are either delayed or beset by developmental difficulties.

That's just a preview based on some selections from the summary page.

Edit:
I noticed that the 2018 Report is out now, which hadn't been the last time I visited the page. 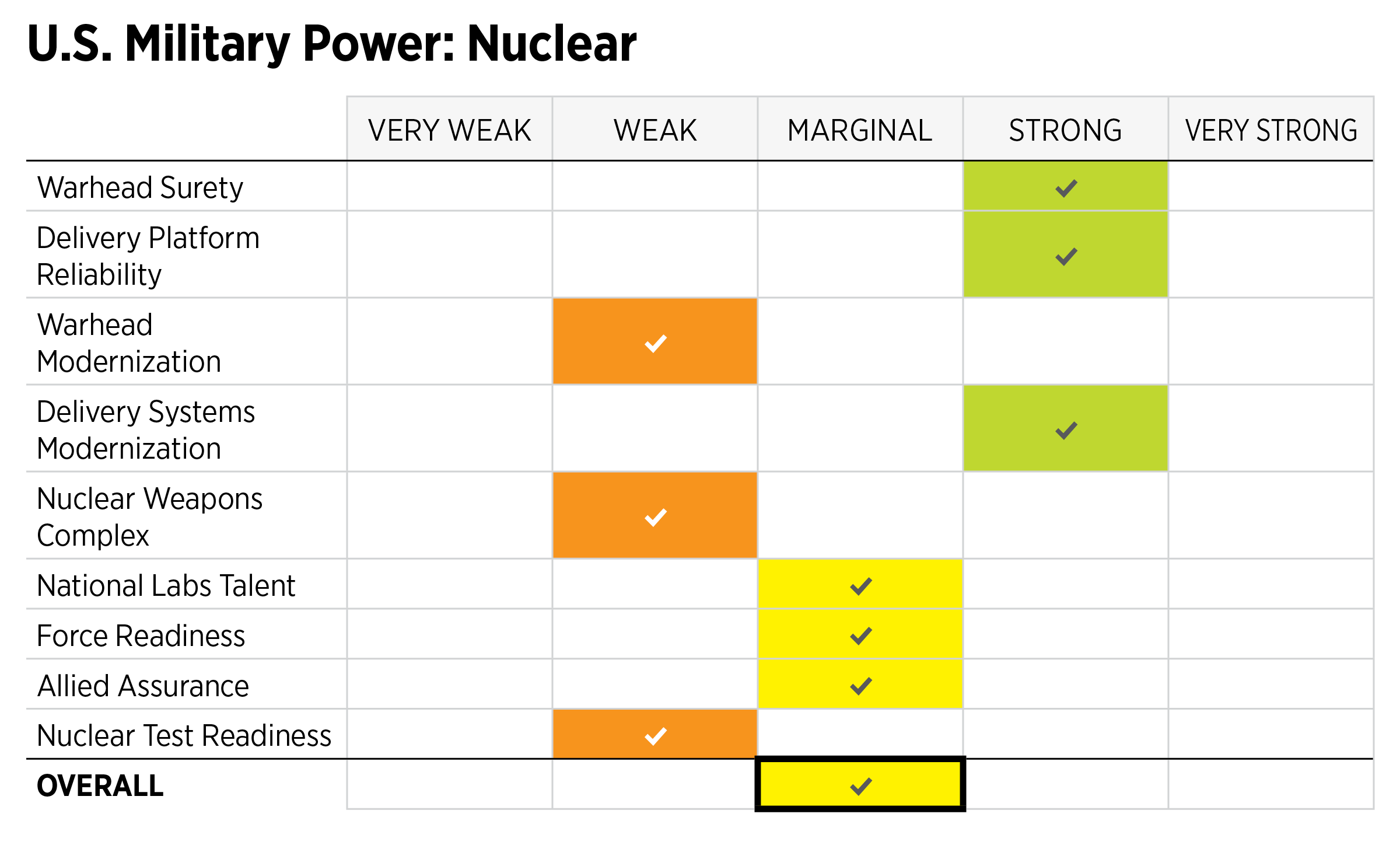 Nice of the Heritage Foundation to publish all this useful intelligence for "the enemies of the United States."
Last edited by Crantag on 06 Jun 2018 11:44, edited 1 time in total.

Like
-  06 Jun 2018 10:05 #14921744
When you have so many sailors and soldiers, it is hard to keep standards up in peacetime. Most of it is fat, little is professional. Most of these guys signed up for a secure job and some decent money. They will do the absolute minimum to keep their job. It's bloat typical of any large organization with a massive workforce.
Of all things in the world, metaphysics requires the least amount of effort; as it is neither based on nor subjected to the test of objective reality, people can talk as much nonsense as they like. - Xi Jinping

@Igor Antunov @Drlee I think you are a Serb […]

I looked after an old man with dementia for 8 mon[…]

When I am tlaking about the long term, I really me[…]