Like
-  30 Mar 2018 03:00 #14901072
I was reading an idea that Germany and Japan had no choice but to fight, since they were being strategically isolated by the Oil Superpowers of the US and USSR. Like it was their only chance to continue to be or become world powers.
Poverty is a Mind Set.

Like
-  31 Mar 2018 20:34 #14901538
It's always about access to resources and markets; but war never is the only option. In fact, it should always be the very last option. The patient game of diplomacy, no matter how frustrating, is always better than war. Politicians who tie themselves to the mast of jingoism are born losers.
Europe unite against the forces of Imperialism!

That concept is a load of BS and probably presented by a very biased and questionable source. The answer isn't simple and oil is a very small component.

Japan was pursuing a "Co-prosperity Sphere" of influence that had led it to invade and conquer most of China prior to Pearl Harbor. The U.S. opposed this and - yes - FDR did suspend sales of "Strategic Materials," oil and scrap metal, arms, etc. The lack of U.S. cooperation in no way crippled the Japanese military. The Japanese militarists that fomented the attack on the U.S. were supported and encouraged by the Germans who were being hurt by FDR's support of the British. Germany could not effectively divert the U.S. so they enlisted the Japanese to do so.

The armistice that ended WWI paved the road to WWII by unrealistically punishing the German population and causing a massive depression. This deep economic depression brought Hitler and his Nazis to power as the "Saviors" of the German people. Like the Japanese Hitler had a plan of expansion known as "Liebensraum" that entailed the conquest and resettlement of the Russian steppes. Pursuit of that concept by the German military caused the start of WWII.

The statement you quoted is a fairly popular excuse usually offered by Neo-Nazi organizations.

As for diplomacy, yes it is a great ideal. But please realise that it was employed extensively by the British, prior to the declaration of War, and was in fact being pursued by the U.S. at the time of the Pearl Harbor attack.

There is a ton of material available for anyone wanting to verify the facts.

My extensive reading of history says this is hog wash.
1] I'll take Japan 1st.
This war started in 1931 [Manchuria] and again in 1937 [China proper]. At those 2 points in time Japan could buy all the oil it wanted. It was only stopped after it occupied Fr. Indo-China. The US let Manchuria go, but started resisting more [short of war] after China was invaded. The move into Fr. Indo-China got them closer to Thailand, Malaya, and the dutch e. Indies [where the oils was and is].
. . . Japan's calamity was that the junior officers of the Army started shooting Cabinet officers and PM who crossed them. They totally intimidated the civilian Gov. The Emperor didn't put his foot down and stop them. There were 3 incidents over a 15 to 20 year period not counting the invasions of Manchuria and China.
. .. . Americana can't imagine it. The Army was out of control. It ignored all reason, like th fact the the US had 10 times the military potential as Japan, and like it was plainly impossible for Japan to invade and occupy the US.
. . . In the end the Emperor asked the leading General [Tojo] to become PM which was against tradition. He hoped Tojo could control the hot heads, he couldn't.
. . . The result was the attack on Pearl Harbor and the atomic bombing of Japan.

To say it was all about oil is ridiculous.
Japan had waited too long [until 1850] to become a modern nation. Then WWI woke up the advanced nations to just how stupid war was. Nobody won WWI, except maybe Japan [because it didn't fight any fight bigger than a skirmish]. Then the nations outlawed war in 1927,Japan signed the treaty because the civilian Gov. could see the wisdom for Japan of not trying to use force to make the other nations accept them as an equal. The Army officers didn't sign the treaty and rejected the whole concept. FDR took the treaty to heart and could not let Japan take China.

2] Now for Germany.
I have never seen any hint that the powers; UK, Fr., US or USSR didn't sell oil to Germany before Sept., 1939. The USSR was selling or giving oil to Hitler on June 21, 1941 [the day before he invaded Russia as their agreement called for].
Hitler wanted to expand to the east. Mainly I think because Russia had lost WWI to Germany before Germany lost to the surviving Allies. So, Russia seemed weaker.
. . . Hitler didn't believe his Generals' warnings that the USSR was much, much stronger than Russia had been and had 30,000 tanks in 1941 when Germany had 3000.

Hitler wanted to *take* the Soviet oil fields, but it was part of his larger land grab, not the cause of it.

Steve_American wrote:Then WWI woke up the advanced nations to just how stupid war was. Nobody won WWI,

I beg to differ. While I'm generally pro West and not pro Nazi or pro Soviet, Western nations engaged in vast hypocrisy both going into and after WWI. The Western nations: Britain, France, the US, Belgium and Holland wanted to decry war, while keeping all of the ill gotten (or even well gotten) gains of war that they had acquired over the preceding centuries.

Anti German racists have managed to twist history so much that Germany's liberation of Alsace Lorraine in 1871 is seen as an act of aggression, rather than a long over due counter to centuries of aggressive French expansionism. In Fact France had been engaging in aggressive expansionism since the untimely death of Henry V of England. I am entirely sympathetic to the post WW1 German Nationalist cause, if not the Nazis expression of that cause, up until the occupation of rCzechoslovakia in March 1939.
While I support the impeachment of Salvador Allende, no executive Presidencies, proportional representation and short fixed term parliaments would have been preferable.

Like
-  30 Mar 2019 21:32 #14996700
The origins go back to before WWI. The colonial powers controlled most of the world's markets and resources. To say they would "sell oil to Germany" (or Japan) is besides the point. The point is that they spent considerable resources to control the world's resource and markets to exploit them for their own benefit. Of course they would sell resources to make a profit, like they would sell opium to the Chinese. Having control meant they could decide the price and conditions or deny/grant access to extract political concessions, just like the US today uses economic sanctions to force other countries into compliance with US policy.

As an emerging industrial nation, Germany could not accept to depend on its rivals for access to resources and markets. Following the Napoleonic wars, the British and French split the colonies between them. For example, the British let the French have Morocco while the French let the British have Egypt, etc. When the Germans wanted of bit of desert in the Agadir affair, the British threatened to blockade the German North Sea ports. Since the Germans had no chance of building enough warships to challenge the British navy, they set their mind on European expansion.
Europe unite against the forces of Imperialism!

Like
-  30 Mar 2019 21:56 #14996710
Nazi Germany invaded Romania to gain access to oil and Operation Tidal Wave was against oil refineries in Romania in 1943. Japan similarly invaded the Dutch East Indies because the rubber plantations and oil fields were considered crucial for the Japanese war effort. But shipping routes from the Dutch East Indies to Japan were targeted by the Allies and more than 90% of cargo ships to Japan were sunk. During the Japanese occupation of the Dutch East Indies, women and children lived in overcrowded internment camps for more than three years before they were evacuated to the Netherlands by the British soldiers in 1945. 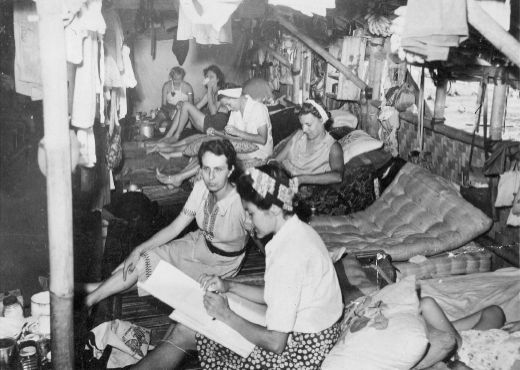 Certainly, the Republican Party has become the Par[…]

@Igor Antunov Your whole argument is based on F[…]

in my post I am not arguing that serbs didnt done […]

If we accept the fact that the majority of peop[…]