The Pentagon may soon be unleashing a 21st-century version of locusts on its adversaries after officials on Monday said it had successfully tested a swarm of 103 micro-drones.

The important step in the development of new autonomous weapon systems was made possible by improvements in artificial intelligence, holding open the possibility that groups of small robots could act together under human direction.

Military strategists have high hopes for such drone swarms that would be cheap to produce and able to overwhelm opponents' defenses with their great numbers.

"Perdix are not pre-programmed synchronized individuals, they are a collective organism, sharing one distributed brain for decision-making and adapting to each other like swarms in nature," said William Roper, director of the Pentagon's Strategic Capabilities Office. "Because every Perdix communicates and collaborates with every other Perdix, the swarm has no leader and can gracefully adapt to drones entering or exiting the team."

Defense Secretary Ash Carter—a technophile and former Harvard professor—created the SCO when he was deputy defense secretary in 2012.

The department is tasked with accelerating the integration of technological innovations into the US weaponry.

Originally created by engineering students from the Massachusetts Institute of Technology in 2013 and continuously improved since, Perdix drones draw "inspiration from the commercial smartphone industry," the Pentagon said. 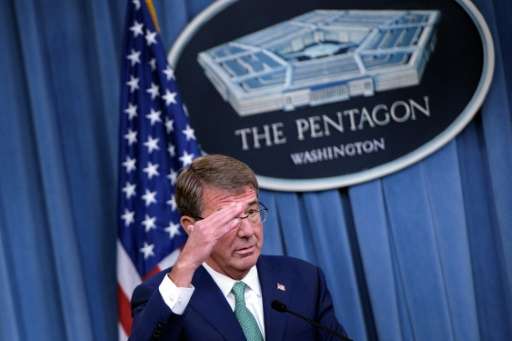 "Science is the belief in the ignorance of experts"
Richard Feynman


This is actually pretty significant. Good chance this is going to evolve into quite powerful and dangerous in time.

Yeah, Technocracy abolishes ideology. More than half the discussion threads in the forum will be obsolete by the year 2025-2030. Luckily, I'm future proof.
Close encounters with ∞Infinity∞
"So much joy I cry, so much pain I laugh."
The ink of the scholar is more sacred than the blood of the martyr.
Remember, you need more than one note to make beautiful music.
Love is the missing link!

Like
-  03 Feb 2017 02:21 #14771402
Swarm technology has all kinds of promising applications for space warfare, point defence, air defence, missile defence and naval and air strike missions. Essentially this would be the next evolutionary phase in drone warfare, making the drones much more useful for conflict, and integrating them with first generation AI.

The air defence and missile defence of platforms such as tanks, helicopters, and naval warships would have to be reconsidered given the possibility of attack by difficult to hit multitudes of enemy drones. This was something that was largely predicted by Colin Powell and Secretary of Defence Donald Rumsfield in 2001.

According to some reports, Defense Secretary Rumsfeldâ€™s spring 2001 Quadrennial Defense Review considered recommending that the Navy stop building large-deck Nimitz-class carriers in favor of smaller carriers that could be deployed in the coastal waters. This new class of "pocket" aircraft carriers, designated the Corsair, is envisioned as a vessel of only 6,000 tons displacement, with a crew of as few as 20 sailors. The Corsair might carry half a dozen of the Vertical Take-Off variant of the Joint Strike Fighter being developed for the Marine Corps. Alternatvely, the Corsairs might employ Unmanned Combat Air Vehicles [UCAVs]. Vessels like the Corsair might be built for several hundred million dollars, compared with the $4 billion construction cost of a Nimitz carrier. The Corsair could allow the Navy to operate in coastal waters, within range of shore-base anti-shipping cruise missiles, according to proponents of the concept. It could also allow the Navy to provide air cover for smaller post-Cold War operations, such as the peacekeeping missions in Haiti or East Timor, that either divert a Nimitz-class carrier or are conducted without air support.

The concepts "WAR" and "PROGRESS" are now obsolete.

Like
-  13 Jul 2017 03:56 #14823073
I envision each micro drone carrying a single kill shot, a swarm could enter buildings and clear out an entire squad of enemies in minutes.
Of all things in the world, metaphysics requires the least amount of effort; as it is neither based on nor subjected to the test of objective reality, people can talk as much nonsense as they like. - Xi Jinping

Like
-  13 Jul 2017 04:13 #14823079
I think microdrones will undoubtably be mainly used for SEAD and air defence.
Possibly also as the micro-munitions in cluster bombs (less indiscriminate).
The concepts "WAR" and "PROGRESS" are now obsolete.

MememyselfandIJK wrote:eh... they can all be taken out at once with a proper jamming signal or the like

Nah, with spreadsprectrum and frequency hopping techniques. Shouldn't be an issue.

Like
-  14 Jul 2017 23:17 #14823567
Then an expert in warfare can probably think of more than half a dozen counter measures. I mean sure anything can be combated but at least give the team of people who've spent years developing this at least a smidge of credit.
My dream is a hemispheric common market, with open trade and open borders.

Like
-  15 Jul 2017 02:29 #14823597
Well technically any powerful jammer will make these drones useless, even if they are fully autonomous, they would be unable to communicate with each other or anything else.

But I doubt they will be used against even a semi-modern army. This smells like an anti-militant toy.
Of all things in the world, metaphysics requires the least amount of effort; as it is neither based on nor subjected to the test of objective reality, people can talk as much nonsense as they like. - Xi Jinping

Like
-  15 Jul 2017 06:20 #14823622
These are short range platforms, and screwing with radio transmissions at these ranges is easy.
Of all things in the world, metaphysics requires the least amount of effort; as it is neither based on nor subjected to the test of objective reality, people can talk as much nonsense as they like. - Xi Jinping

Weird, because I thought there are different in[…]

@Rancid I can understand that. I guess I'll an[…]

Did I miss something? Did Russia do something r[…]