Like 1
-  08 Jul 2019 08:00 #15016805
I love the sport of ice hockey and played it when I was a kid. I do think fighting has a place in ice hockey. In North American and British hockey leagues where fighting is permitted, the sport of ice hockey is safer than in the European leagues where fighting is not permitted. There are far more serious injuries in the European league of hockey than in the North American and British leagues of ice hockey. Here is a great documentary on the unwritten rules and code that ice hockey enforcers enforce:

"Pays to be a winner and really SUCKS to be a loser." -Jocko Willink

I don't like the Instigator rule they brought in a bunch of years ago. It was better when you didn't take a run at a star because then you'd have to deal with their protector. There's a reason that stars like Wayne Gretzky didn't have to fight. He had Dave Semenko as his "bodyguard".

Godstud wrote:It might just have more to do with them doing other things like slashing, dirty hits, and such, instead of simply fighting. Good on ya for being a hockey fan!

Ohh yeah, hockey is the best sport ever. I go to the minor league games here in the southern United States all the time. When I was a kid living in New England I played left wing and goal tender. Fighting in the sport of ice hockey is a necessity to keep the sport safer. It's all about deterrence. Much like say the Army for example! My favorite players in ice hockey are the enforcers. They are the soldiers of ice hockey. The guys who hate fighting but have to fight. They are also the most selfless guys and are not "goons." It might come as a surprise but some of the great enforcers of NHL ice hockey graduated top notch universities here in the United States like Yale for example.

They become enforcers because they don't have the kind of talent like Wayne Gretzky had for example, but they had a talent for fighting. So, they basically sacrifice their mind, body and soul for the team so that the team can play in a safe environment and live up to it's full potential. But they are also the most moral guys too. When an enforcer does his job right, fans of the opposing team HATE him, but his team mates and the fans of his team LOVE HIM. You know an enforcer is doing his job right when the fans of the opposing team fans hang effigy's up of him in the ice rink just before and during a game but his team's fans along with his fellow team mates love him.

Because he is sacrificing his mind soul and body so the Wayne Gretzky's of ice hockey can live up to their full potential and talent and play the game in a safe environment. If wasn't for enforcers, the Gretzky's of hockey wouldn't be last that long because they would become a target for dirty play because they are so talented at scoring goals. My favorite enforcer was Tony Twist. Loved the guy. He's one bad dude. 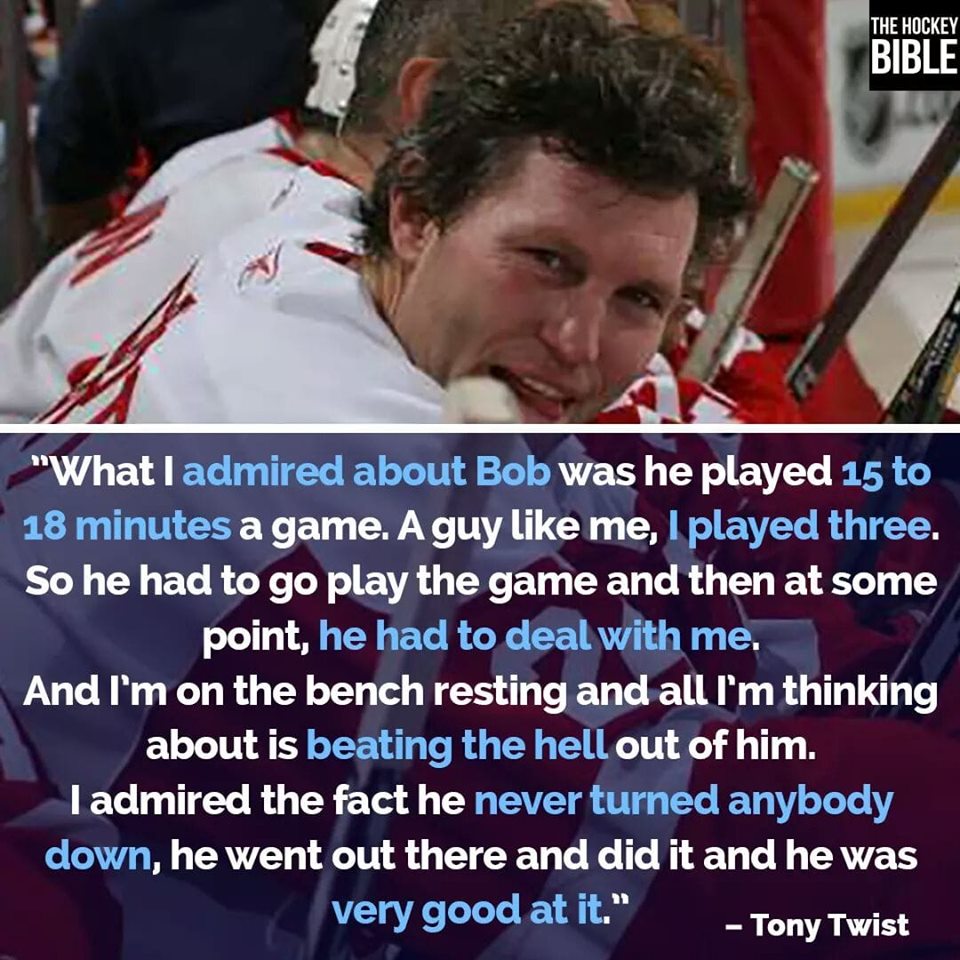 "Pays to be a winner and really SUCKS to be a loser." -Jocko Willink

Like
-  08 Jul 2019 19:44 #15016857
On one hand I like the fighting in hockey and understand why it is part of the game, but on the other hand I find it intellectually hypocritical. What other sport can you literally punch someone in the face after the whistle blows and nothing at all happens.
The only thing close is baseball where you can hit a batter on purpose and only get a warning. I'm against the stupid unwritten rules of baseball.

What I would like to see in hockey (all sports) is if someone cheap shots another player and takes them out of the game , that said player should be suspended for the duration of who they took.

Fighting, is a part of the game. There aren't usually cheap shots. The two players agree to go at it. It revs up the game and adds more emotion to it. It can change the dynamics of a game, and get your team motivated. I wouldn't want to see it gone, and right now it really only exists in the upper tiers of hockey.
“Let me never fall into the vulgar mistake of dreaming that I am persecuted whenever I am contradicted.” ― Ralph Waldo Emerson

Like 1
-  09 Jul 2019 03:29 #15016990
Great movie. I'm talking about the play after the whistle, in any other sport that would get a rejection and suspension. Fighting does have a role, especially when someone takes a cheap shot at your star player. In hockey they police themselves.

I always thought the fights were just random. Apparently not? Is this some WWE type of shit?

Like
-  20 Sep 2019 01:49 #15034868
The fights are not completely random. Often it might be in retaliation for a hit, or even to get the team revved up.
“Let me never fall into the vulgar mistake of dreaming that I am persecuted whenever I am contradicted.” ― Ralph Waldo Emerson

Edit: Last 2 unrelated posts which got caught up in this moved back. Apologies.]
"Science is the belief in the ignorance of experts"
Richard Feynman

Like 3
-  08 Jan 2020 21:38 #15058529
Fighting is necessary in the NHL because without the presence of "enforcers" or "goons" then smaller, high skilled players are vulnerable to targeted hits that are still technically permitted under the league's rules. Generally speaking the NHL finds it easier to allow fighting to occur in moderation rather than alter the rule book in a drastic way to eliminate it entirely.
Black Lives Matter

It's obvious that you don't understand a fucking t[…]

Racism can be unlearned. It's a beautiful story I […]