By Jonnorth -  24 Oct 2019 04:01
Like
-  24 Oct 2019 04:01 #15044384
This issue worries the entire world community, judging by the belligerent actions of the United States, which undermine stability not only in the Asia-Pacific region and the Middle East, but also everywhere. I think it’s not worth mentioning that America always and everywhere pokes its nose into others` affairs.

Everything would have been more or less calm, if not for the US withdrawal from the INF Treaty in 2018 and the subsequent development of prohibited cruise missiles. Then the sale of colossal arms to Saudi Arabia, countless sanctions and unfounded accusations against a number of countries.

Analysts believe that America’s disrespect and history distortion, its arrogance towards all other nations and endless hypocrisy can ultimately force the world to respond. Where there is controversy, a lack of compromise and instability, there definitely begins a war. Or not?

Like
-  24 Oct 2019 15:08 #15044450
The United States and NATO are the biggest stabilizing forces in the history of mankind. The causes of WWII were American isolationism, British appeasement, Russian collaboration and of course German, Italian and Japanese imperialism. The Axis powers perceived the major powers as weak and as such attacked despite being industrially, technologically and numerically inferior. Currently, the USA and NATO are active participants in the global world order and are keeping Chinese and Russian aggression largely in check. The USA is perceived as powerful, strong and deeply involved in world affairs. It's also considered the natural ally for geostrategic rivals that are threatened by Russia and China, such as India, Thailand, Vietnam, Philippines, Japan, several central Asian nations, etc. The EU is the contemporary equivalent to the British empire in the early 20th century and is also deeply involved in world affairs and has a defensive treaty with the USA under the NATO umbrella. Together they are the most powerful force on this globe and more than a match for China, Russian, Pakistan, rogue-NATO member Erdostan (Turkey), Iran, North-Korea and whoever else wants to join in on the fun.
Someone stole my sig.

In addition, technology is reducing the effectiveness of MAD, it's a lot easier now to wind up in a "use it or lose" moment.

Is it inevitable? I don't think so. But the danger is growing.

Btw, Trump has destroyed our standing in the world. Countries are making new arrangements that don't depend on us. While a new president can repair some of the damage, the American Century is over.
Facts have a well known liberal bias 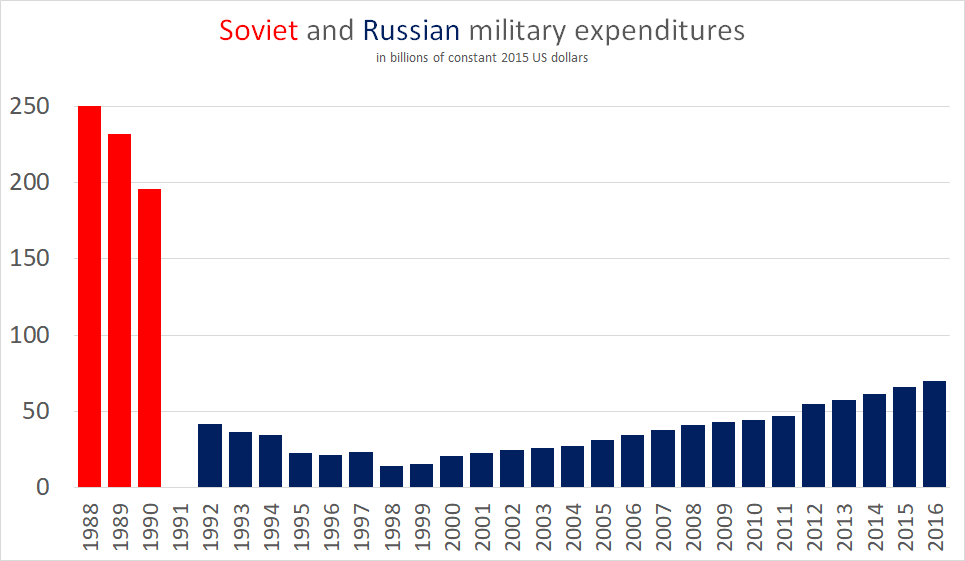 Russia is no longer a nuclear threat. The Soviet Union was a superpower which spent as much as the United States did during the Cold War and Mikhail Gorbachev and Ronald Reagan signed the INF Treaty that was necessary to prevent a nuclear war. But nowadays, Russia spends as little as Japan does on national defence. Russia's defence expenditure was slightly above Saudi Arabia's in 2016 and we don't have to worry about MAD anymore, while China emerged as our biggest concern.

Reply
Return to “Environment & Science”
25 May

Leaving out a major piece in this puzzle, just be[…]

@Doug64 Again: Is there any evidence that mai[…]

@colliric You are an Aussie I believe. You pe[…]

But then you are not a doctor, do not know the ma[…]