Quarantine Apologies and "the Tower of the Elephant." - Politics Forum.org | PoFo

Quarantine Apologies and "the Tower of the Elephant."

The safest take on the coronavirus pandemic has always been uncertainty. There is so much about this virus we do not know, and, as a result, so little we can pronounce with justified confidence. The information we have is misleading or incomplete more often than not; models accordingly need frequent revision; and it seems there are exceptions to every plausible rule.

Unfortunately, uncertainty doesn't play well in politics, and long-formed habits of confident statements by officials, experts, and pundits were not broken by the appearance of COVID-19. The result is many things many people have said with at least an affect of strong certainty have been proven wrong. Many more of these things will be proven wrong over the next month or two, as states implement varying plans to re-open their economies.

In these coming weeks, then, it will increasingly become time for apologies. If we hope to come out of this with anything left of public trust in expertise and institutions, those who got it wrong must be willing to say so.

It's interesting to see this kind of thing from a left-wing publication. I'm not sure if the author realizes just how much the Twitterati and other raging netizens influence the modern Democratic party: I highly doubt that apologies are forthcoming. On the contrary, I expect most of them to double down on everything. Lockdowns being extended until August in some places suggests that I am right.

The whole thing reminds me of a great Conan the Barbarian story! It's called "the Tower of the Elephant" and it is one of the best pulp fiction stories ever written and yes, spoilers follow.

At the end of the Tower of the Elephant, the villain is presented with a magical gem that will destroy him if he tries to use it. Even though he knows this, he is possessed of certain personality quirks (let's call it a form of "narcissistic personality disorder") that make him unable to resist trying to use the gem and as such, he is destroyed, even though he fully understands that attempting to use the gem would destroy him.

I've come to believe that many Democratic politicians (and many of their supporters) are possessed of a certain form of narcissistic personality disorder as well. It makes them unable to resist a certain kind of behavior, namely: if they can hurt someone but plausibly claim that they thought they were trying to help, they will not be able to resist doing such a thing. And these coronavirus lockdowns fit that mold perfectly.

Here's what the lockdowns can do:
- they screw over those who have the audacity to live off of their work instead of relying on our saviors
- protect "the environment"
- promote "basic income" and communism because the government is basically forced to give out money when there's a lockdown
- even if one is pushing all of these things and they are hurting people, one can claim to be a hero

Here's what the lockdowns actually do:
- Cuomo is never getting past his nursing home scandal, which collided with likely inflated numbers to make him look either incompetent or insane
- Various Californian politicians have people locked down until August and have said that they may do it for longer
- mass, uncontrollable civil disobedience in "safe blue" places like New York city and New Jersey
- conservatives in Florida, Georgia etc. looking smart and effective in comparison

Those are incomplete lists. Just wait until people start asking Democratic Presidential candidates, "if there is another coronavirus, would you lock down the entire country until there's a vaccine?" Most of them would answer yes. Anyone should be able to tell that it's time to apologize over how this thing has gone but to a certain kind of person, mass civil disobedience is merely proof that you are smarter than everyone else. Being proven wrong only changes the types of insults that will be employed. To this kind of person, the power to prescribe lockdowns are the perfect poison, the elephant tower gem, Gollum's ring from Lord of the Rings, whatever. I don't think they will be able to stop themselves and I think it's going to set them back politically for decades, decades that they may not have.
200k/yr media job where we all wear sweater vests, kiss each other & try to convince people Biden is technically a "molestor" not a "rapist."

Like
-  18 May 2020 13:42 #15092553
Chris Whitty, physician and epidemiologist Chief Medical Officer for England, Chief Medical Adviser to the UK Government, Chief Scientific Adviser at the Department of Health and Social Care and Head of the National Institute for Health Research: 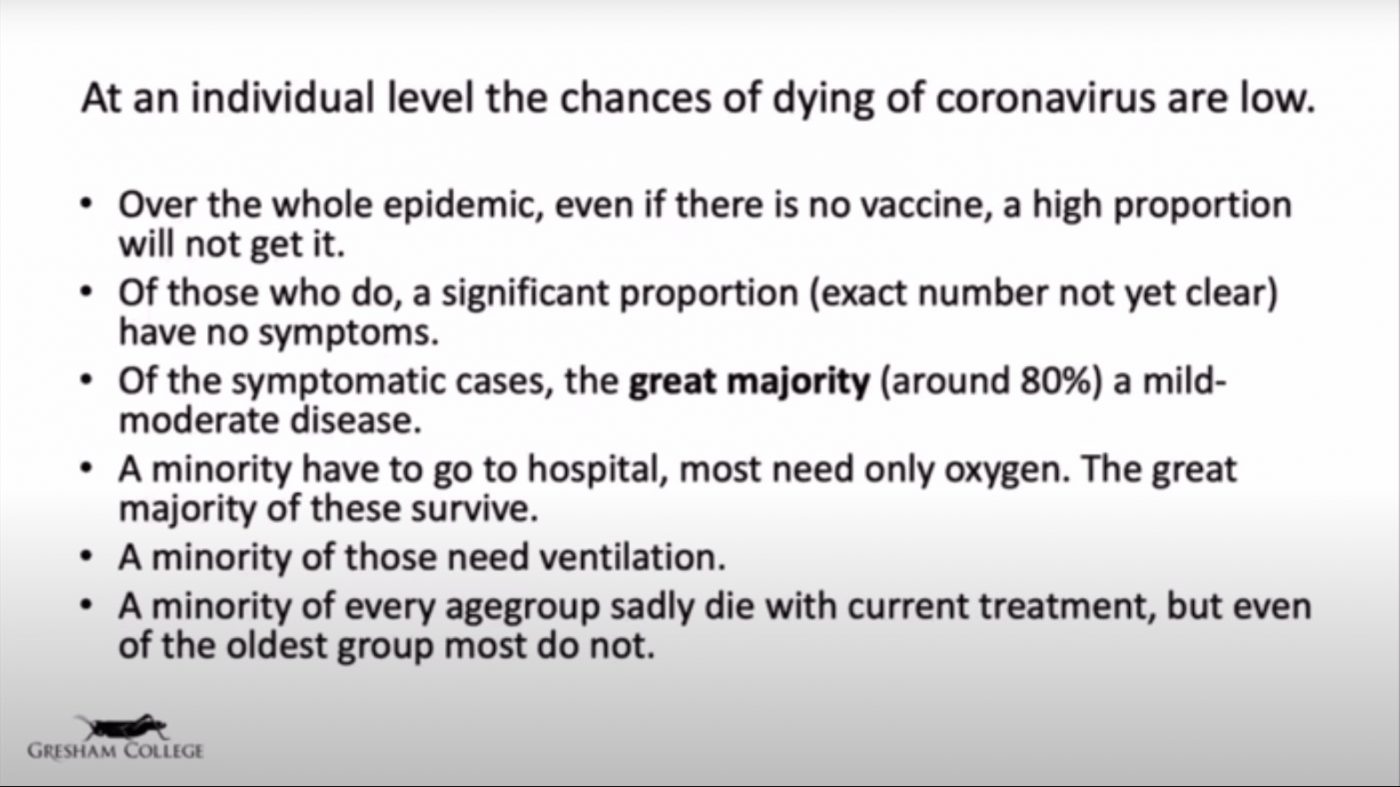 "only 12% of death certificates have shown a direct causality from coronavirus, while 88% of patients who have died have at least one pre-morbidity - many two or three." - Professor Walter Ricciardi, Director of the Department of Public Health

Gavin Newsom, governor of California, recently said that if California doesn't receive a federal bailout he will need to fire "first responders" which is understood to mean police officers, fire fighters and paramedics.

Let's put this into context: California infamously lost billions of dollars trying to build a high speed rail project while getting almost nothing done. It has budget problems that predate this event by decades, even though it has one of the highest potential revenues. California's government has been letting violent criminals out of jail so that they won't spread the coronavirus (which almost exclusively kills the elderly) through prisons. There's widespread civil disobedience because the lockdowns were extended until August in some places, with the threat of longer shutdowns. The state is notorious for wildfires. We're (barely, at this point,) in a pandemic. And now the governor is saying that he's going to fire the police, firefighters and paramedics, although they also came up with $47 million or some similar amount to give to illegal aliens in their latest state bill (an act that is arguably illegal). I'm sure this is an incomplete list.

Even so, I still don't think any apologies are forthcoming. The real question is, what will they do next?
200k/yr media job where we all wear sweater vests, kiss each other & try to convince people Biden is technically a "molestor" not a "rapist."

Wulfschilde wrote:It's interesting to see this kind of thing from a left-wing publication.

You think The Week is a "left-wing publication"?

It's a rather low-quality repeater of stories researched elsewhere. I have found it is unreliable enough to reject it as a fact source. For its opinion columns, like this one, it uses people across the spectrum - Kristian also appears at Christianity Today and the American Conservative, for instance.

I'm not sure if the author realizes just how much the Twitterati and other raging netizens influence the modern Democratic party: I highly doubt that apologies are forthcoming.

There's one Democrat mentioned in the column - Stacey Abrams, on the subject of Georgia cases. But, since their governor has had to apologize for a series of errors in their statistics, I don't see that any critic of his should be expected to apologize yet:

In the latest bungling of tracking data for the novel coronavirus, a recently posted bar chart on the Georgia Department of Public Health’s website appeared to show good news: new confirmed cases in the counties with the most infections had dropped every single day for the past two weeks.In fact, there was no clear downward trend. The data is still preliminary, and cases have held steady or dropped slightly in the past two weeks. Experts agree that cases in those five counties were flat when Georgia began to reopen late last month.

DPH changed the graph Monday after more than a day of online mockery, public concern and a letter from a state representative. Gov. Brian Kemp’s office issued an apology and its spokespeople said they’d never make this kind of mistake again.

“Our mission failed. We apologize. It is fixed,” tweeted Candice Broce, a spokeswoman for the governor.

This unforced error — at least the third in as many weeks — is confounding observers who have noted sloppiness in case counts, death counts and other measures that are fundamental to tracking a disease outbreak. Georgians check the data daily to decide whether it’s safe to reopen their businesses or send their children to daycare. Policymakers use it for decisions affecting the health of more than 10 million Georgians.

In fact, seven-day rolling averages of cases show only a slight decline over two weeks. Deaths appear to have plateaued, according to an Atlanta Journal-Constitution analysis of daily DPH reports. The impact of reopening Georgia’s economy is still too early to measure for both new infections and deaths because of the lag time between an infection, testing, diagnosis and, potentially, death.

The latest flubbed chart lists case counts from the most recent 14 days, but data collection lags and a quirk in the state’s method of recording cases mean that counts for recent dates are often a fraction of what they turn out to be when the data is more complete.“You really don’t want to be using very recent data to make decisions, given those delays,” said Benjamin Lopman, an infectious disease epidemiologist and an expert on using statistical analysis and other tools to address public health issues.

I've come to believe that many Democratic politicians (and many of their supporters) are possessed of a certain form of narcissistic personality disorder as well.

And then you launch into a long, boring screed based on fantasy novels, just to attack Democrats. Let's face it, the whole world knows that the most serious case of narcissistic personality disorder in world politics is Trump. If you really do want to apply your fiction reading to current politics, it's absurd not to start with him.

:lol: In what fucking moral universe is getting […]

Stop demanding leftists vote for evil, even if you[…]