The solving of mankind’s problems and abolition of government via technological solutions alone.

Migration- I’d expect immigration to be restricted to prevent the society from being overwhelmed by demand but what about emigration? If a medical student decided to work in a hospital overseas this would represent a loss of resources for the technate that provided education, food, etc. for free.

Expansion- Would there be attempts to expand the boundaries of the technate into Mexico and beyond?

International aid- Would the technate produce surpluses for export in the case of emergencies such as natural disasters? Would scholarships be provided to foreigners? Would international organisations be formed to provide other nations with developmental assistance?

Imports- If certain commodities couldn’t be found in N America they would have to be imported. Would the technate barter with other nations in order to access these as there is no commerce within the technate?

Defence- How would the Technate defend itself from the threat of invasion and terrorism? Would there be secret police to identify and monitor potential spies and saboteurs? Who would have institutional oversight?
In China the government owns the banks. In America the banks own the government. Which is better? Let's read newspapers owned by billionaires to find out!

AFAIK wrote:If a Technate were established in N America what sought of foreign policies might it institute?

Migration- I’d expect immigration to be restricted to prevent the society from being overwhelmed by demand but what about emigration? If a medical student decided to work in a hospital overseas this would represent a loss of resources for the technate that provided education, food, etc. for free.

This issue hasn't been discussed; I believe the pragmatic solution dictates protecting ethnic and cultural integrity for all within the borders of a post-scarcity society. While it might now be viable across the globe, rather than in North America alone, of the 2000 some-odd languages existing today out of the 100k a hundred years ago, only 200-some odd are expected to exist in a hundred years; furthermore, mass culture is diminishing the overall cultural uniqueness of varying ethnic groups. In regards to that, ethnocultural autonomy will be a necessity.

Expansion- Would there be attempts to expand the boundaries of the technate into Mexico and beyond?

All systems seek to expand. We'd have to work pragmatically with Mexicans and other countries. Unlike free trade systems, however, such interactions will be mutually beneficial rather than mutually parasitic.

International aid- Would the technate produce surpluses for export in the case of emergencies such as natural disasters? Would scholarships be provided to foreigners? Would international organisations be formed to provide other nations with developmental assistance?

America already does that; a post-scarce society would be able to do it better, especially w/ a focus on building up the infrastructure and human capital necessary to improve their society.

Imports- If certain commodities couldn’t be found in N America they would have to be imported. Would the technate barter with other nations in order to access these as there is no commerce within the technate?

For necessary resources, yes. However, given than post-scarcity is possible on a global scale and space exploration is much more viable than we currently accept, such barter would be a medium-term prospect with a more focused, driven advancement into space ensuring unimaginable resources per capita.

Defence- How would the Technate defend itself from the threat of invasion and terrorism? Would there be secret police to identify and monitor potential spies and saboteurs? Who would have institutional oversight?

The US already has a strong military, and most of it's operations are humanitarian aid. Plenty of people would choose to continue to serve their country, and a greater technological focus would be a force-multiplier. More advanced weapons that already exist would be brought into play, so we'd be even stronger. Plus, 3D printed guns are being worked on, so failing our military might we'd still be a 300 million strong militia.
"We learn to shield ourselves from sleights and veiled abuse with our massive balls. Hope you all have them."- Igor

The foreign policy of a nation should be the external strategic implementation of that country's national policy. The national policy of a nation is determined by the geography of its sovereign domain: its soil, climate, and precipitation range within its boundaries; the adequacy of its natural resources; and the extent to which its continental area provides sufficient coastline on one or more oceans to provide the national entity with access to the seaways of the world. Under this broad generalization, the second determinant of policy is the state of development of that nation's technology in the production and distribution of physical wealth to its citizens and, if necessary, to the world. What we are herein describing is that there are two general categories of nations. Of the first category there are those whose national domain are of such order of magnitude in size, resources, and technology that it may develop into a contiguous continentalism. And there are those of the lower order of magnitude whose size, inadequacy of resources and technology place them in the category of dependent nations.

The national policy of a nation in the first category can be entirely different from that of those in the second category. A contiguous continentalism adequate in size, resources, and climate to provide the means for a technological production and distribution of physical wealth can envisage its social destiny to where it may, under proper control of all internal operations, create an economy of abundance with a standard of livelihood impossible of attainment by those nations of a lower order of magnitude. National policy would always be restricted by the geographical and geological limitations of the dependent nations' domains. Nations in this second category can only have a national policy whose chief theme is the preservation of law and order for the legal distribution of scarcity within their own national boundaries. Their policy must always remain one of conservative expediency and of small trickeries and minor pretences that arise from an insufficiency in size and the inadequacy of a minor order of national magnitude. Their future is always one of national fear either of conquest or absorption on the part of larger and more powerful negihbors. The psychology of their national policy is one of fear. They are always on the defensive. Their hopes of attainment in the world of international relationships are a perpetuation of more of the same national standards they have enjoyed. They therefore are fearful of social change in other nations because, realizing their inadequacy on the international scene, they might succumb if national change were sufficiently widespread.

The day of the small nation has passed insofar as no small nation today is capable of developing a social system that can be exported to the world superior to that which can be instituted by the technological application of science to the operation of a contiguous continentalism. We of North America must realize that only a contiguous continentalism operated by a technological control can produce a national policy capable of having its reflex, its foreign policy as an exportable ideology of national welfare desired and hoped for by the people of the nations of the world. The export of American dollars, British pounds sterling, or Russian rubles are but the peanut pretences of national incompetence on the international scene."

"IN THE SPACE AGE OF TOMORROW, HOW CAN TECHNOCRACY ISOLATE ITSELF ON THE NORTH AMERICAN CONTINENT?

I haven't the slightest idea what that questioner means. If he means social and political isolation of this continent, no; Technocracy never proposed any such thing. There wouldn't be any. What would our policy be? I'll give you one part of our policy toward the world: We'd invite qualified students from the rest of the world to the tune of 250,000 a year -- free -- for four years. It would be the damnest, dirtiest trick anybody ever played on the rest of the world. We'd bring them in here, house them and train them and send them back. Oh, brother! What would it do? Well, as the old-time boys would say -- it would raise hell and put props under it, wouldn't it? Would that be isolation? Certainly not." 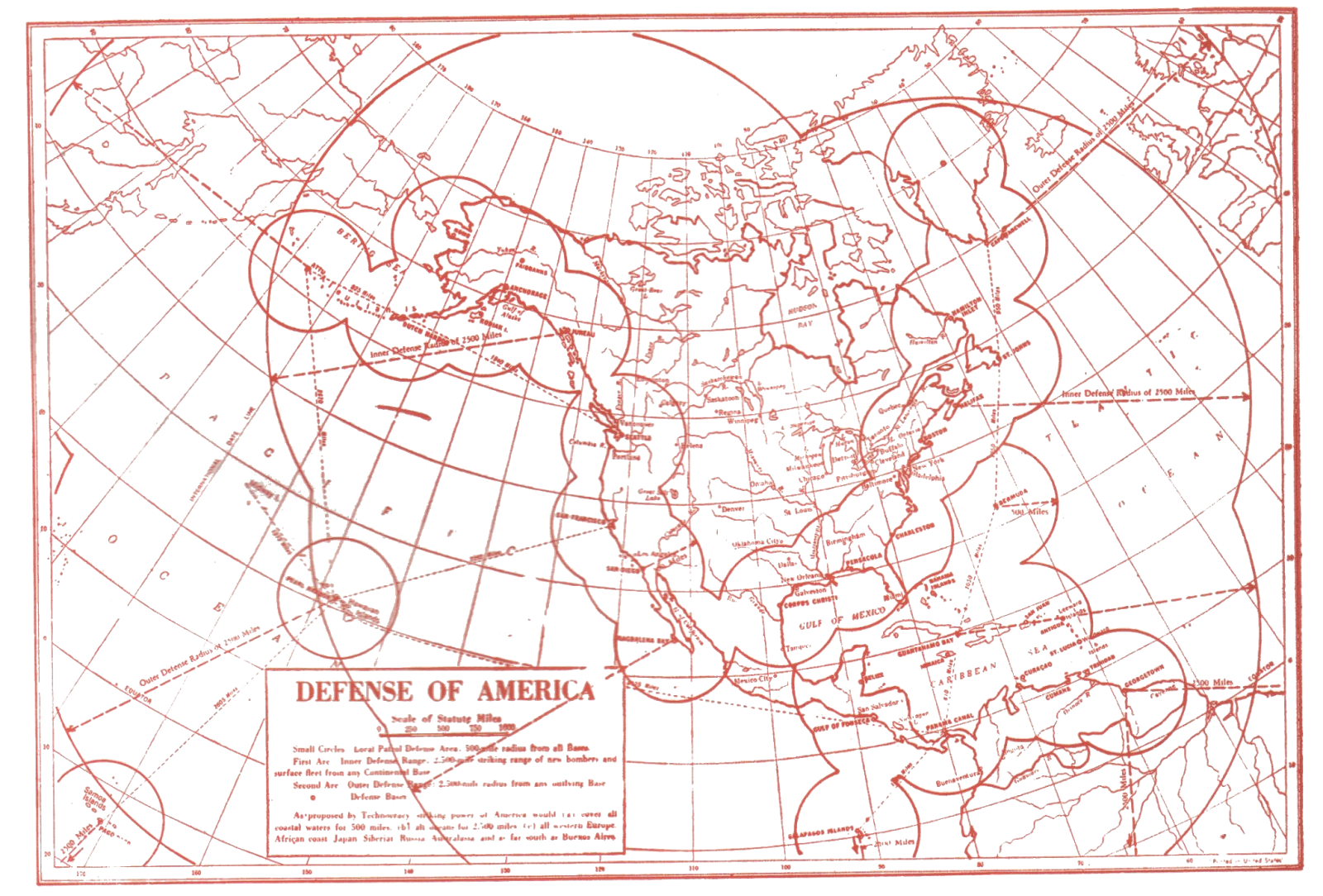 "It's like the Navy publishing a copy of our North American defense map on the inside of their front cover and the flyleaf of the back, and then coming to tell us that we were plagiarizing their map. We said, well, you'd better look it up in the Library of Congress, because it was registered there before the war. Don't you think you should know your own institutions before you come and tell us something like that?"

Like
-  17 Oct 2014 03:49 #14476800
A bigger investment in digital diplomacy. A global p.r. campaign via Google's home page. I believe in the possibility of technocrats seizing power eventually and partially am for it. Adapt to the times right? In world order by Kissinger he adressess tech's effect in international relations today and the new digital age by Eric Schmidt also adressess tech in foreign policy. Speaking of Schmidt he'd be an ideal technocrat. If that's too far at least the head of a tech centric cabinet level post in the US government. We need cabinet level post today, it is common sense.
"Everyone sees what you appear to be, few experience what you really are." - Machiavelli

You say all this yet you promote the false pro po[…]

Read the second paragraph I wrote. You tell me. […]