The other sexy Madonna

Like
-  30 Apr 2020 19:08 #15087973
When Madonna Louise Ciccone stormed the music scene in the 1980s, her use of sexual imagery seemed to mock the traditional image of Madonna, the Mother of Jesus. She was never Like A Virgin. Yet, this was not the first portrayal of a sexualized Madonna.

Madonna is the usual title given to several versions of a composition, by the Norwegian expressionist painter Edvard Munch, showing a bare-breasted half-length female figure, between 1892 and 1895, using oils on canvas.

strange devotional picture glorifying decadent love. The cult of the strong woman who reduces man to subjection gives the figure of woman monumental proportions, but it also makes a demon of her.

The usual golden halo of Mary has been replaced with a red halo symbolizing the love and pain duality. The viewer's viewpoint is that of the man who is making love with her. Even in this unusual pose, she embodies some of the key elements of canonical representations of the Virgin: she has a quietness and a calm confidence about her.

It just goes to show that there is nothing new under the sun or perhaps that the Scandinavians are always ahead of the curve in challenging sexual and cultural norms. 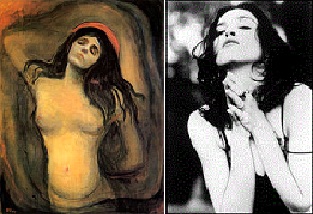 It is preposterous to blame governors. Blue or re[…]