CNN is fake news...... and guess who has the evidence! - Politics Forum.org | PoFo

CNN is fake news...... and guess who has the evidence!

Yep CNN is now in the firing line of Project Veritas, and it wasn't one of their own investigations... It's leaks from a CNN insider.....
Location: Melbourne, Australia
Ideology: Australian Liberalism

This could be fake news and an excuse for Project Veritas to get more publicity.

What do they hope to accomplish with this evidence?

MistyTiger wrote:How do we know that this is legit? Has anyone actually seen this evidence?

This could be fake news and an excuse for Project Veritas to get more publicity.

What do they hope to accomplish with this evidence?

Yes. Part 1 has been dumped online, WikiLeaks style, at http://www.cnnleaks.com

There is over 119 hours of audio just plain dumped in Part 1 alone. The sheer volume of recordings is proof they are in fact legit. Project Veritas doesn't have the funding, manpower or time to create that amount of audio from scratch.

Obviously they want to prove once and for all CNN is "really fake news". Plus they want CNN's already shit reputation for manipulative reporting to be made even worse.

The recordings are from 2009.
Location: Melbourne, Australia
Ideology: Australian Liberalism

For a few days, Project Veritas founder and conservative activist James O'Keefe has been hyping the release of what he said were hundreds of hours of undercover audio recordings of employees at CNN.

Some staffers at CNN were legitimately alarmed that O'Keefe would be releasing tapes that could be embarrassing for the network. O'Keefe is known for his undercover video recordings, though questions over deceptive editing and concerns about the questionable tactics used to obtain those recordings have plagued some of his prior work. Before releasing the tapes Thursday, O'Keefe was featured on The Drudge Report and on Sean Hannity's radio show, where he previewed their release.

Instead, what O'Keefe released on Thursday landed with a dull thud in the media world. Though not all the hours of tapes have been made available for review, and damning recordings could still come out, O'Keefe made clear the audio he obtained is from 2009 and for the most part features lower-level staffers at the network.

In Project Veritas' news release about the tapes, the first highlighted segment are two producers talking about the use of certain polls and why then-CNN polling director (now NH1 News political director and anchor) Paul Steinhauser declined to use a poll by Rasmussen, a group whose polling methods are still not widely accepted. Another highlight is of an assignment desk editor saying "Fox News is unbearable," and a news desk editor talking about how "there's no debate" about climate change.

What got the most attention on social media, though, was the unusual highlighting of a well-known quote that role of journalism is “aiding the afflicted and afflicting the comfortable.” But Project Veritas portrayed the situation as Richard Griffiths, now vice president and senior editorial director, being "caught explaining" the role of a journalist.

Here is Griffiths' quote, as “caught” by Project Veritas:

"If we are journalists, what is our role as a journalist? What is the fundamental role as a journalist, for us to do? Tell a story. Tell what's going on. There's a secondary corollary to that, right? Aid the afflicted and afflict the comfortable. To a degree, right? Is that not part of the traditional role of a journalist. It's actually one of the things I can be most proud of as a journalist. You know we try to show the ugly side of humanity so we can do something about it. It's hard, very hard."

O'Keefe suggested in a video that CNN is now working on afflicting President Donald Trump. The phrase "comfort the afflicted and afflict the comfortable," though sometimes attributed to H.L. Mencken, is best known for its use in the 1960 film "Inherit The Wind." Poynter reported that the first known use of the phrase was from 1902, written by journalist and humorist Finley Peter Dunne.

O'Keefe says he isn't done. He's calling on volunteers to comb through the 119 hours of raw tape, and is offering a $10,000 reward of "content that exposes media malfeasance." Shortly after the tapes were released, The Drudge Report shifted the focus from the tapes to O'Keefe placing "a bounty" on the media by offering the reward.

When reached for response, a CNN spokesperson said "I don't think there's anything to comment on."

When reached for response, a CNN spokesperson said "I don't think there's anything to comment on."

Wait until the risotto recipes are found ...

"I recorded 119 hours of my colleagues talking at work, and all I got was this lousy botched quote of a humorist from 100 years ago..."

@colliric , what is it in these 119 hours that you think is worth starting a thread about? You forgot to say.

This feels like a witch hunt and it is thanks to Trump.

Instead of attacking CNN, Project Veritas should focus on reporting about human suffering and corrupt governments. They are misusing their resources.

A veteran CNN producer who worked “shoulder to shoulder” with ex-anchor Chris Cuomo has been fired after it was revealed he bragged about luring girls as young as 7 to his home for “sexual subservience” training, the network confirmed.

John Griffin, 44, was indicted Friday by a federal grand jury in Vermont for attempting to “induce minors to engage in unlawful sexual activity,” according to the Justice Department. CNN announced his suspension that same day.

“The charges against Mr. Griffin are deeply disturbing. We learned of his arrest Friday afternoon and terminated his employment Monday,” a CNN spokesperson told The Post.

Griffin is facing a mandatory minimum of 10 years on each of the three counts. 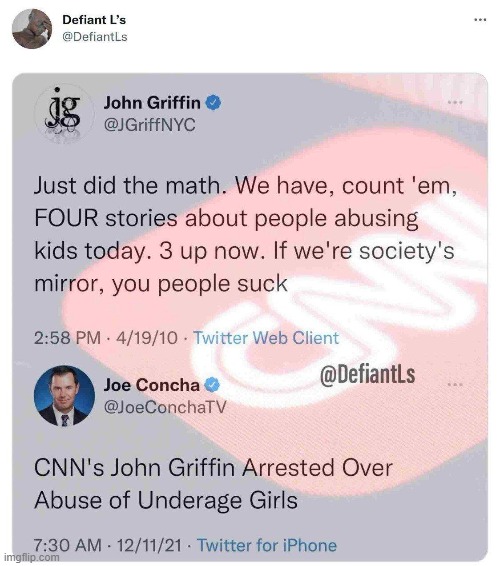 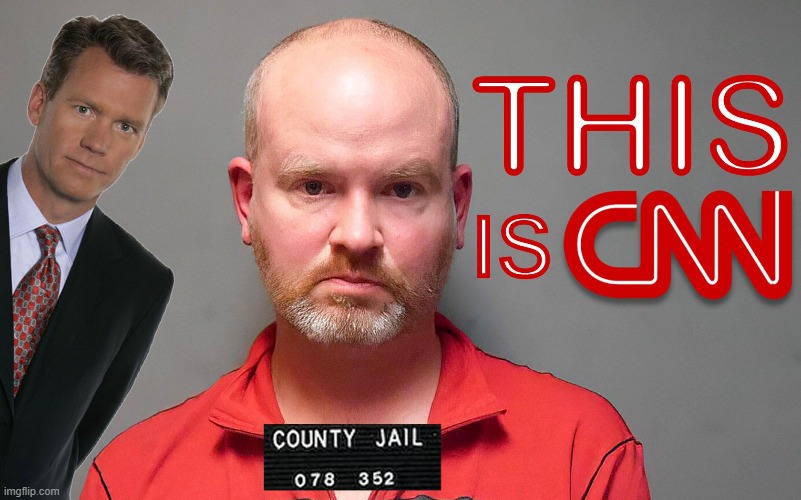 You seem keen to spread fake news, though. 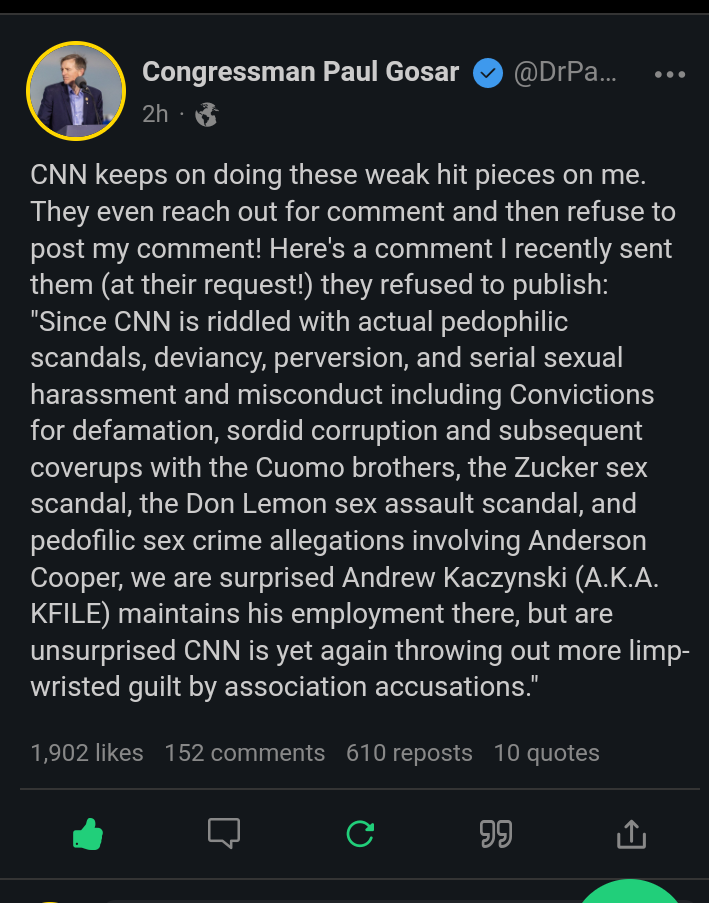 Yep CNN is now in the firing line of Project Veritas, and it wasn't one of their own investigations... It's leaks from a CNN insider.....

Project Veritas calling something fake news, it's a luagh,.

Right wingers are SO gullible they believe everything they are spoon fed.

Project Vertaias an right wing propaganda set oyt to spread porprganda with no repect for the truth or facts,

pugsville wrote:Project Veritas calling something fake news, it's a luagh,.

Right wingers are SO gullible they believe everything they are spoon fed.

Project Vertaias an right wing propaganda set oyt to spread porprganda with no repect for the truth or facts,

Please speak SLOWLY and CLEARLY into the microphone.
https://www.openthebooks.com/

Like 2
-  15 Mar 2022 22:04 #15217966
James O'Keefe is a false flag pedophile cabalist just like fake cuck Paytriot Alex Jone$. He works directly for Soros, Antifa, and Brian Stelter to discredit the CNN propaganda machine in such a way as to discredit EVERYONE who rejects the Cabal News Network. O'Keefe works for the same people who try to slander us by lumping all truth communities (planetary disc truthers, Nibiru acknowledgers, Dinari/Great Reset investors, etc.) into one big bag of crazy. The cabal does this to purposely hold back enlightenment of the human race and prevent us from becoming beings of pure love and energy, because they need our children's blood to sustain themselves. And you can't squeeze blood (literally squeezing, they have giant child presses under the Lincoln Memorial) from a child who has ascended to become a star being.

Please do not support O'Keefe. He is an in media res society marxist pushing his propaganda. You are hurting our cause. Do you know why he was able to hamfistedly wiretap a sitting US Senator and receive no punishment? Because Hillary KKKlinton orchestrated it to make us patriots look bad. She needed him to get caught to make us look stupid, and he played his part perfectly.

EDIT: Since I am getting private messages about the child pressing machines, here is my source. This seemingly innocuous tweet from the glamours Ivanka Trump is a coded message to patriots informing us of where the child presses are.

Notice anything there? "Daily Cold Pressed Juice???" It's clearly code for "DC Pressed Juice" (Soros, Brian Stelter, Pelosi, etc. all refer to adrenachrome as "juice"). "Make at home" is a clear indication that she KNEW Trump would become president and make his home in DC when he finally took his crusade against the cabal public.

Trump had been planning to fight the cabal and assume the presidency for decades before he actually ran, and this was all part of his plan. It's all there, you just have to look.
WRITER 4 HIRE
WILL DO RACISM FOR BEER, CASH
HELP A PATRIOT OUT

BlutoSays wrote:Please speak SLOWLY and CLEARLY into the microphone.

Don’t Look Up!
"Politics is the art of looking for trouble, finding it everywhere, diagnosing it incorrectly and applying the wrong remedies." - Marx (Groucho)

Why do you all continue to play into Soros' plans?
WRITER 4 HIRE
WILL DO RACISM FOR BEER, CASH
HELP A PATRIOT OUT

BlutoSays wrote:And ANOTHER one. CNN must be pedophile central....

A veteran CNN producer who worked “shoulder to shoulder” with ex-anchor Chris Cuomo has been fired after it was revealed he bragged about luring girls as young as 7 to his home for “sexual subservience” training, the network confirmed.

So rather then emphasizing the fact that CNN deviously limits its "pundits" to pro-war, arms-dealing ex-generals and its economic coverage to other interesting parties (both of which kill the public's ability to make wise democratic decisions)... we are emphasizing the "CNN has nasty sexual desires" smear?

Perhaps our sleazy media has affected more than just our understanding of our political system. Maybe it has also taught us now to "debate" using sexual neuroses to block any conversation about media's responsibility to tell enough truth to allow democracy to occur?

...Tomatoes, potatoes, corn, coffee, chocolate, maple syrup...
What kind of people genocided the nations that developed most of our diet?

So much panicked delusion in this thread. Your fat[…]