Prosthetic Conscience wrote:Why would you take a whole month together? We have figures for each week. You're doing the equivalent of "if I half-close my eyes, I can't make it out - we'll call it the same". Oh, wait, that might explain your problem with reading the graphs ...

Because you wrote this?

Prosthetic Conscience wrote:So the deaths more than doubled in a month. 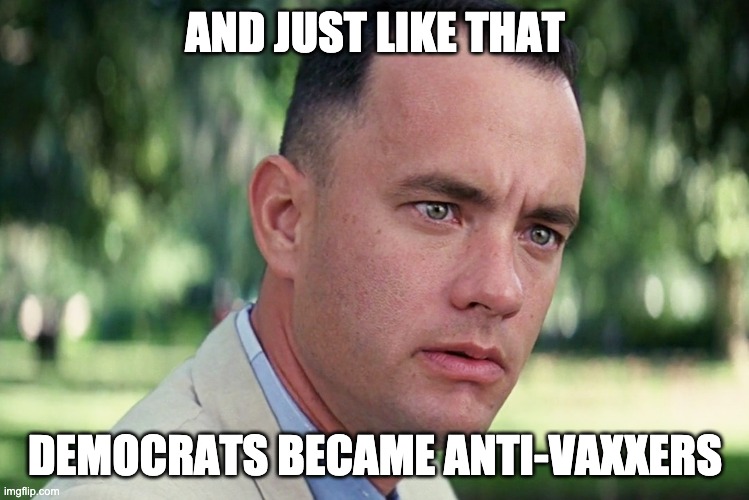 Brace yourselves, Kamala Harris has said that she won't take the vaccine if Trump says it's safe. We have reached the summit, Dims are about to become anti-vaxxers.
Sweet baby Jesus, please preserve our President against the vitriol and hexes of these abusive criminal leftists. Please let him beat COVID!

I think it was during the Clinton years. There is so little profit in most vaccines that production fell below what we needed. It took some doing to keep them going.

But, you know, why let reality get in the way of a good rant.
Facts have a well known liberal bias

Prosthetic Conscience wrote:Why would you take a whole month together? We have figures for each week. You're doing the equivalent of "if I half-close my eyes, I can't make it out - we'll call it the same". Oh, wait, that might explain your problem with reading the graphs ...

Prosthetic Conscience wrote:So the deaths more than doubled in a month.

Ah; a subtlety of English that non-native speakers may not realise: when you say something (such as a doubling) happens "in a day/week/month", that doesn't mean that you take the time period and the following one; it just means you take similar measurements separated by the time period. So if you say "my weight doubled in a decade", it doesn't mean that you have to have some measure of "weight per decade".

Anyway, we can see the deaths more than doubled in a month.

It was obvious to the few of us with half a brain whose approach to social policy wasn't totally twisted by demented left wing ideologies that Vitamin D is an important part of disease resistance and that probably included resisting the Xi virus. The lock down was madness, sheer madness, restricting peoples access to sun light and fresh air is guaranteed to increase mortality rates. It should also have been obvious to anyone with half a brain that this was going to disproportionately effect darker skinned people living in cooler temperate climates, many of whom will have been suffering form vitamin D deficiency before the lock down.
While I support the impeachment of Salvador Allende, no executive Presidencies, proportional representation and short fixed term parliaments would have been preferable.

WHAT A DISGUSTING PIECE OF SHIT THIS FORUM HAS BEC[…]

@Pants-of-dog As long as we understand that yo[…]

If I was Sivad who claims to be a serious thinker[…]