Like
-  30 Jul 2020 14:37 #15110585
Trump has always said that the virus would disappear one day like a miracle. So far, he just wasn't sure about how to make the miracle happen in time for the next election. At first he thought about reducing testing to reduce the number of confirmed cases, but since that didn't go fast enough he now decided to change the way Covid-19 cases are counted.

And what do you know, from one day to the next the number of new infections dropped. After a period of exponential growths, the curve suddenly started to level off and then decline: 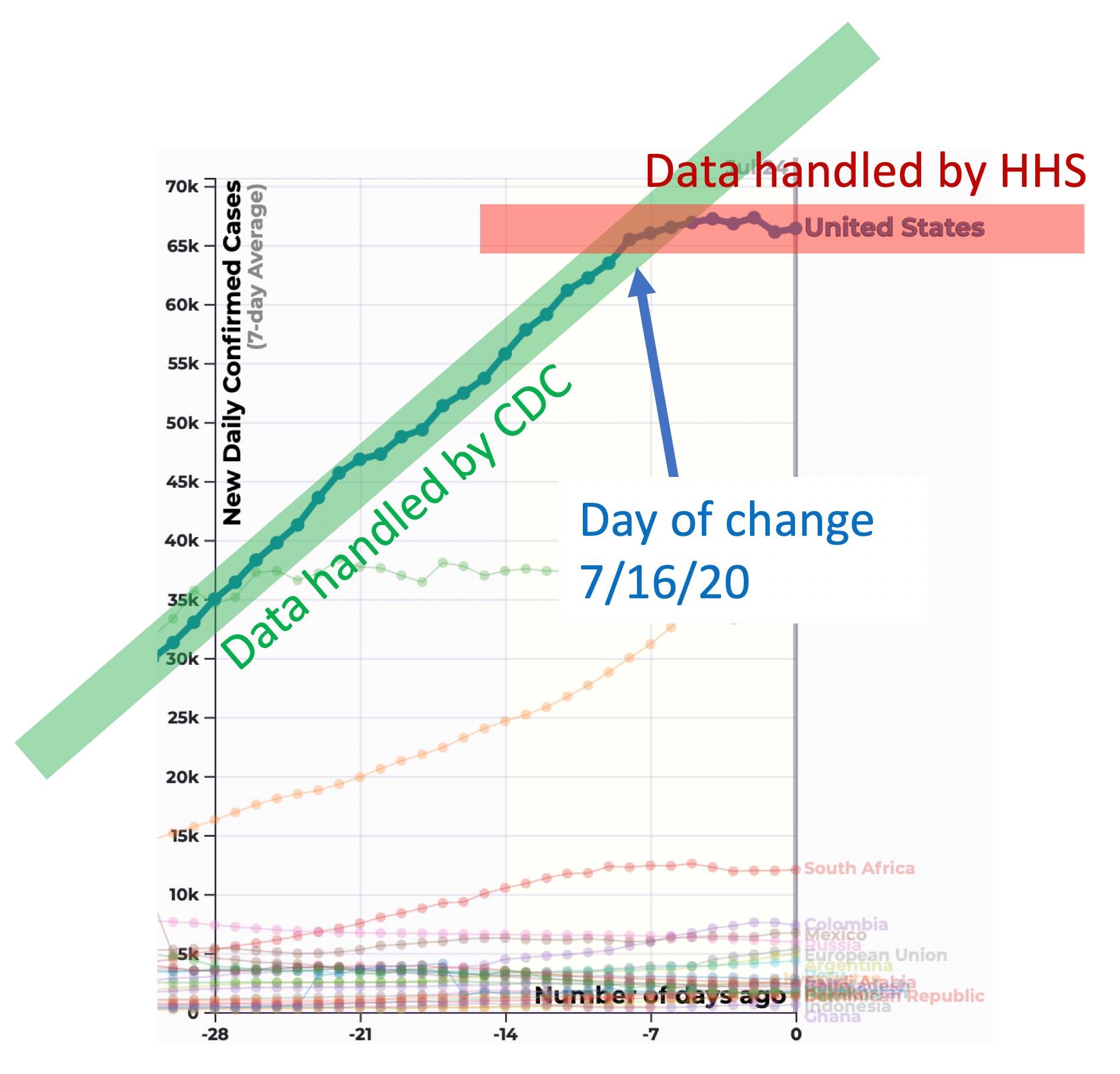 If we look more closely, we can see that all the sudden change comes from the Red States, while the infections for the Blue States continue on their upward path:

How did he do it? Simple, the HHS at the WH just cut out the CDC from the Covid-19 tracking and awarded the contract for keeping track of the pandemic to a little known start-up, whose CEO is a long-term GOP donor and who has contacts to the Trump organisation. The multi-million contract was awarded under murky circumstances.

The red states are cooperating with the Trump administration to cook the books. From now on, we'll have to add another 20 to 30% to the official US figures so as to get a correct picture. Extending the curve of the exponential growth, the US is already at 100,000 daily new infections by now. Soon there will be more than 2,000 deaths a day.

He did it again. By downplaying the pandemic he gives the virus another boost. With falling numbers, there will be less willingness to contain the virus.

Americans will have to pay the price with even more deaths.
Europe unite against the forces of Imperialism!

Frankly, if it's not that he's the only person capable to push something into happening, and that Biden's reasonableness would cause someone believe they can do whatever they want, I wouldn't mind if the entire Trump administration was removed overnight ...

Like
-  02 Aug 2020 21:05 #15111096
There are numerous ways of manipulating the numbers of infected and deaths, but in the end the truth will come out when excess deaths data become available. Flu deaths are estimated by using excess deaths, there is no reason why it should be different for Covid-19.

Excess deaths data for the US available so far show that by June 18th more than 200,000 had died due to the pandemic instead of the 140,000 recorded officially.

Through July 18, estimated excess deaths were about 36 percent higher than the official coronavirus fatality count. If this pattern holds for the rest of the country, it would put the current death toll at about 204,000 people.

Tracking the Real Coronavirus Death Toll in the United States
Europe unite against the forces of Imperialism!

I give him the benefit of the doubt. Perhaps he really believes that he ought to be the last elected president of the United States. There is no doubt in my mind that he does.

The ones to blame are his supporters starting with the Senate majority. They are the ones allowing this slow moving coup. Follow them with his very unintelligent followers. They share the blame also.

The ones I find the most unintelligent of all are the Tea Party shitheads a gun nuts. Why unintelligent? Because every gun owner in this country ought to know that every autocrat first goes after the guns. I am sure they would be wild about the gun laws in Russia. Putin will shortly convince Trump that he ought to back the same ones here. Bye Bye the majority of handguns and all military style weapons.

It is important that we call out Trump supporters for what they are. They are the responsible parties not Trump. He didn't think for a moment that he would win. Yet, these abject fools put him in office. And they have, so far, have bankrupted the country and killed 150,000 Americans for their stupidity. Or outright malevolence.
To believe in God is impossible not to believe in Him is absurd.

Drlee wrote:
It is important that we call out Trump supporters for what they are. They are the responsible parties not Trump. He didn't think for a moment that he would win. Yet, these abject fools put him in office. And they have, so far, have bankrupted the country and killed 150,000 Americans for their stupidity. Or outright malevolence.

The U.S. Department of Health and Human Services is reversing course on a change to the way hospitals report critical information on the coronavirus pandemic to the government, returning the responsibility for data collection to the Centers for Disease Control and Prevention.

Like
-  23 Aug 2020 09:16 #15115054
The Trump administration tries to hide the real extend of the pandemic in the US by changing the counting method and by reducing testing. However, excess deaths statistics will sooner or later reveal the real extend of the virus outbreak. According to the CDC, 215,000 Americans have so far died of Covid-19 instead of the 175,000 acknowledged officially.

As many as 215,000 people in the US have died as a result of COVID-19 pandemic, new CDC figures suggest

As it is, Chinese Covid-19 data are more reliable than US data.
Europe unite against the forces of Imperialism!

So Hindsite is just lying for the person he has c[…]

We've been enslaved by the half-truths of languag[…]

@Wulfschilde do you only get your news from Fox […]

I don’t really Care about communism we’re not com[…]