The Brexit Party logo is sending people ‘subliminal messages’ to sway their vote, remainers have claimed. Nigel Farage’s new party logo is a giant arrow pointing to the right, which when put on a ballot paper, points towards the box that voters have to mark. Change UK MP Anna Soubry reckons it symbolises a fallen over house, while some believe it’s a clever ploy to subconsciously dupe undecided voters into selecting the insurgent party. Remain activist Magdalena Williams is demanding the Electoral Commission puts the party logos on the right of the ballot paper so Farage’s arrow points away from the voting boxes. Failing that, large arrows could be put around all the political parties to even the playing field, she suggested in her online petition. She wrote: ‘This needs urgent attention. We know Vote Leave broke the law at the 2016 referendum. We will not put up with another attempt to hijack the votes.’

Professor of clinical psychology Richard Bentall wrote to the Electoral Commission last week to say the logo is an ‘unfair advantage’ towards Farage’s party. He wrote: ‘I have just read that the Brexit Party logo to be used on the ballot paper in the imminent elections to the European Parliament is an arrow pointing to the choice box for the party. ‘You should not require a psychologist with three decades of research experience to point out to you that this is an obvious cue to vote for the party. ‘In the case of many voters, the cue may well work subliminally (the voter will not be aware of it).’ He added: ‘In my professional opinion, the ballot paper confers an unfair advantage to the Brexit Party, and clearly violates democratic norms. ‘You might as well put a bright red ring around the party’s choice box.’

Despite these protests, the Electoral Commission confirmed Farage’s arrow went through a ‘robust and thorough assessment process’. A spokesperson said the logo ‘was not likely to mislead a voter’. They told metro.co.uk: ‘As part of an application to register a political party, we consider any emblems against the statutory tests set out in law. ‘One of the statutory tests requires the Commission to consider whether an emblem is likely to contradict or hinder a voter’s understanding of guidance for voting set out on the ballot paper or elsewhere. ‘After our robust and thorough assessment process, we came to the opinion that this emblem was not likely to mislead a voter.

‘This is consistent with other decisions we have made about party emblems. ‘Part of our consideration was that, if at all, the emblem directs voters to the correct place to cast their vote for the party and does not encourage or discourage voters from casting their vote for other parties, or in any other way not to cast their vote correctly.’ Well, if the current polls are to believed, the Brexit Party won’t have to rely on alleged underhand tactics, as they’re 18 points ahead of any party. YouGov’s latest poll puts the Conservatives in fifth place, 24 points behind Farage’s party. Despite only launching weeks ago, the Brexit Party is on 34 per cent ahead of the election on May 23.

Farage is clearly a genius. Nobody else ever thought of using an arrow that points to the voting box as part of the logo. So many election victories foregone. 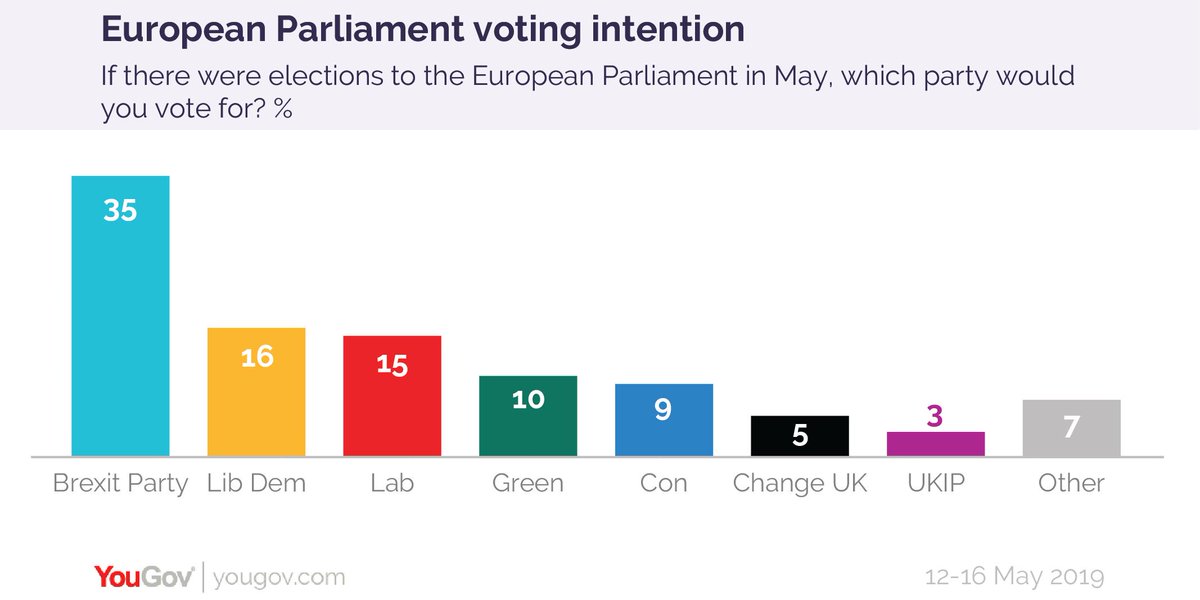 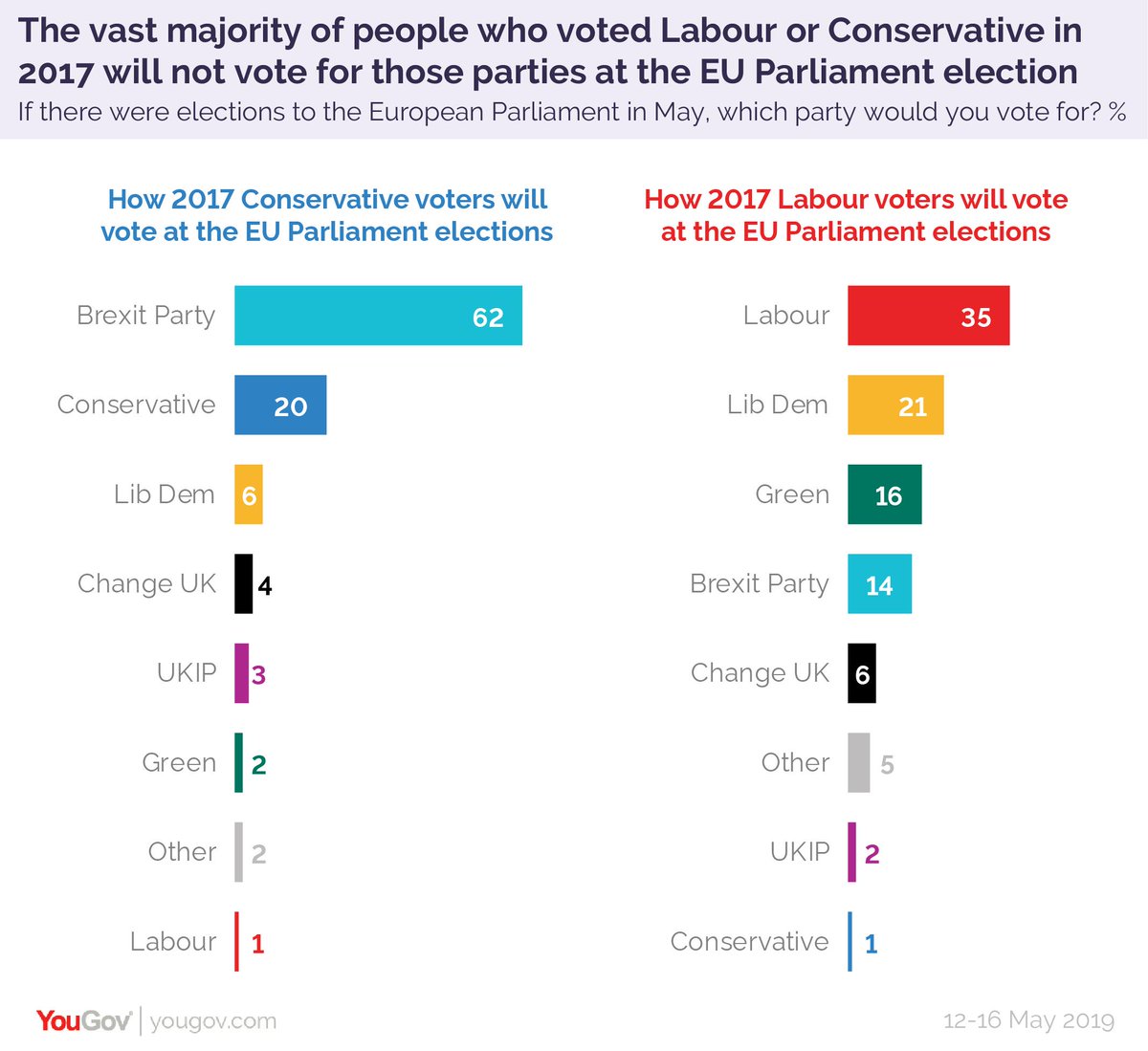 Edit: Popularity of party leaders
"Science is the belief in the ignorance of experts"
Richard Feynman

Like
-  18 May 2019 02:38 #15005410
A couple of months ago I was interviewed by the BBC for BBC breakfast on my views about Brexit. An interview that was chopped, over-dramatised and edited beyond redemption but more on that later.

During the interview I told the BBC that unless one form of Brexit happens in March, then we will witness 2 things: 1) the rise of the far-right and 2) the destruction of 2 party-politics. Of course all that was omitted from the interview that was actually broadcast and when I said that "this( .ie the rise of the far-right due to Brexit fudge) would be a sad outcome" the BBC made it out as if I was saying that Brexit is a sad outcome, even though I explicitly said that soft Brexit with a CU is my preferred solution...anyhow...the interviewer at the end got engaged in the conversation with me after the camera got switched off and he told me that "there is no chance that the 2 party politics will collapse in the UK or that a far-right party will ever rise above 15%", he only mentioned 15% because I reminded him that this was actually Farage's % in the national elections in 2015 and when I told him that this happened in Greece in 2011 and that I am seeing exactly the same pattern in the UK he retorted: "The UK is not Greece, we never had a far-right junta here" to which I replied that the junta was officially openly backed by the CIA and that does not show Greeks are more far-right than Britons, it simply means that in Greece a short-lived regime change took place sometime in the past(60's) and that is totally irrelevant to modern-day political attitudes, he reluctantly agreed and then told me that "in any case the FPTP system in the UK will always prevent the rise of the fringes" to which I said that Greece also had a FPTP system up until recently(2011) and that Greece went representative only when the 2 major parties realised that they we will be beat in the FPTP by the fringes in Greece's case the far-left(at the time) Syriza. At which point they realised that the only way to save themselves and maintain their relevance was to change the FPTP to representative so that they can then become coalition partners, Tsipras who had campaigned for more representative system for decades could not avoid supporting the move, and so in 2012 it was changed. I guess the parallel with Farage is quite obvious and this election could mark such a turning point for the UK electoral system as well.
EN EL ED EM ON

Like
-  18 May 2019 09:05 #15005479
I doubt the arrow could sway any votes actually. The name Farage/Brexit is either toxic or utopian and that is what really matters to most people when voting on Thursday. We had the same talking point as this with the Scottish referendum on the terms "Yes" and "No" being used - with yes being seen as positive and no being seen as negative. And yet even when polling at the end was tight and could have gone either way, this cognition couldn't have been a factor as no ended up increasing their margin and winning by 10%.

What if the Lib Dems beat Labour too? What then, Mr. Corbyn?

@noemon wrote:A couple of months ago I was interviewed by the BBC for BBC breakfast on my views about Brexit.

For what reason did they interview you?

Beren wrote:For what reason did they interview you?

First time was 2 months before the vote, they assembled various EU people from cambridge and made us do a picnic and exchange food, but at the time I did not make the final cut, at the time I was asked what I think the outcome would be and I said: Brexit. After Brexit happened they contacted me again and they did a little piece that was broadcast live and it was me, an Italian guy and a Romanian girl in a Polish cafe in London discussing Brexit but more specifically the status of EU residents that was being announced by Theresa May at the same time that morning, that was a few months after Brexit, then they called me 2 months ago and they did a non-live interview with me and my wife at my premises including our children but as I said that was cut and edited instead of broadcasted live. That was also the same day that Theresa May announced the new system/app for applications for EU residents. We are still in communication however and they want to do another piece after the elections. They say they like my presence and I can give them what they are after, a feel-good story more than anything presenting a European who has made a life here with a British woman and 3 children that also has a relevant opinion and a stake in the British economy. Up till now all the pieces have been feel-good drama stories, however I am hoping it will move beyond that at some point. A few weeks ago we did a telephone interview that lasted for 2 hours and it was very comprehensive stuff of the level we talk about in here, pure political analysis.
EN EL ED EM ON

Reply
Return to “Europe”
25 May

My evidence --- they are pretty short articles. F[…]