Saif al-Islam at large after being released from death row - Politics Forum.org | PoFo

Saif al-Islam at large after being released from death row

Political issues and parties in the nations of Africa.

Muammar Gaddafi's British-educated son was released from death row in Libya earlier this year and now appears to be at large even though he faces charges at the International Criminal Court (ICC) for crimes against humanity.

Saif al-Islam Gaddafi, the ousted dictator's most prominent son, was sentenced to die by firing squad last year after being found guilty of war crimes and was thought to be in prison in the western city of Zintan.

It has now emerged he was in fact released from in April and his whereabouts are unknown.

A document apparently from Libya’s temporary ministry of justice ordered his release under an amnesty law following appeals by elders from the Gaddafi tribe.

Gaddafi’s British lawyer, Karim Khan, told France 24 that his client was freed on April 12 and “is well and safe and in Libya”.

News of his release may stir tensions in Libya, especially as he was let go by militias in Zintan, a province that is already at odds with the other leading elements of Libya’s UN-backed unity government.

He studied at the London School of Economics and received a PhD - part of which he was subsequently accused of plagiarising.

Some Western diplomats hoped he would eventually replace his dictator father and lead Libya to economic and political reforms.

But when the Libyan uprising began in 2011 he sided with his father’s regime and vowed to crush the revolt.

He was captured in November 2011, just a few weeks after the elder Gaddafi was killed, and later charged in a Libyan court with war crimes.

The sentence of death handed down by a Tripoli court last year was widely criticised by the UN and human rights groups who said that Gaddafi had not been given a fair trial.

He is still wanted by the ICC to face charges for his role during the Libyan uprising. International prosecutors allege he was responsible for crimes against humanity and murder during the 2011 conflict.

Apparently he was released as far back as April but the release was hushed by the Zintanis in order to avoid unnecessary uproar. I think it's pretty self evident what happened and why.

A new government was formed under UN auspices back in January, called the "Government of National Accord". Its formation was a result of a compromise government that was signed by the main conflicting parties, intended to try to help resolve their differences. Of course, surprise surprise, given that the actual political-military reality on the ground didn't change, it resolved nothing. Long story short, the new government ended up finding common ground with Misrata's "Dawn" forces, so it established itself in Tripoli at the end of May and is enjoying their protection, while Haftar's Tobruk/Bayda "Dignity" faction still stands on its own.

However, something did change - since the new government enjoys UN's backing, therefore it - and the factions supporting it, are now nominally the legal government of Libya, while the "Dignity" faction guys are now almost outlaws. Before the agreement, it was the opposite - the "Dignity" faction was the legal government, while "Dawn" was the outlaw. This alone was a pretty unwelcome change for "Dignity", of course. Furthermore, some small factions inside Libya have used this change in international standing as an opportunity to switch sides or play a complicated game, like the Petroleum Facilities Guard militia, for example - formerly an ally of Haftar, is now reportedly closer to "Dawn".

All of this caused the "Dignity" faction to become a little more desperate in search for allies, and they started reaching out more seriously to some new players inside Libya, like Gaddafi loyalists and outside Libya, such as Russia. To be fair, many Gaddafi loyalists have been fighting alongside Haftar's people and Zintanis from the start of the "new" civil war in 2014. However, the whole "Government of National Accord" problem had evidently compelled the two sides to come even closer. Most of the Libyan tribes who once fought for Gaddafi in 2011, such as Gaddafi's own (Qaddadfa), as well as Warfalla, Tarhona, Wershifana, and Al-Magarha - are now one way or another supporting or directly fighting for Haftar, Gaddafi's former top General and one of the members of the original al-Fateh revolution that brought Gaddafi to power in 1969. It is most probable that the release of Saif al Islam was one of the main conditions of the Gaddafi loyalist tribes, which they demanded in exchange for their aid to Haftar's forces. And they got what they wanted.

Of course, I don't think anyone is under the illusion that the former Gaddafi regime can be reconstituted in any recognizable form in present day Libya, however it is not impossible that a heavily morphed and modernized version of that regime can re-emerge from the chaos, with general Khalifa Haftar as its head and representative. That would complete Libya's prolonged and violent cycle from revolution to counter-revolution. Maybe Saif can yet be a minister.

Here's a recent picture of one of Haftar's field commanders that just got killed in action. Note the emblem on the cap lol. 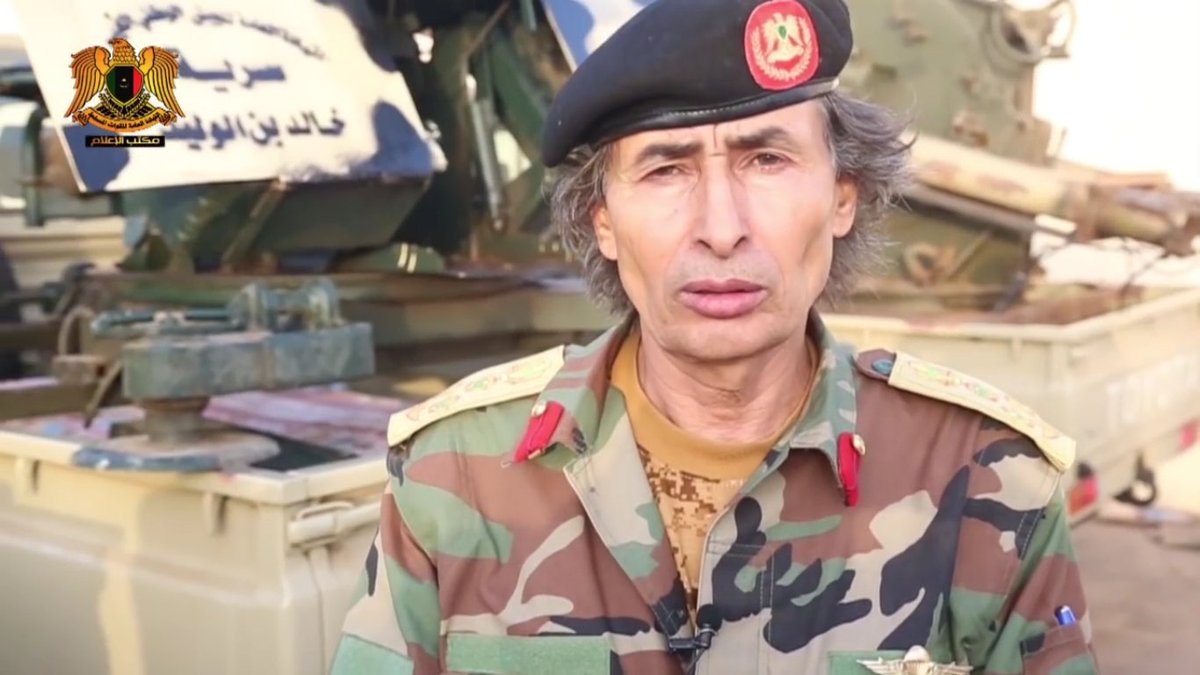 Re: Saif al-Islam at large after being released from death row#14699388

Re: Saif al-Islam at large after being released from death row#14700110

The embattled son of the late Libyan strongman Muammar Gaddafi was released from jail several weeks ago and has been living in the town of Zintan, his lawyers have told FRANCE 24.

Saif al-Islam – once widely regarded as Gaddafi’s likeliest successor – was sentenced to death in 2015 for crimes committed during the revolution that overthrew his father. He has nevertheless been allowed to walk free under an amnesty provision by the Libyan government as it struggles to unite the country.

Lawyer Marcel Ceccaldi on Friday confirmed his client had left jail on April 12, 2016 as originally reported by FRANCE 24, adding that he was not serving time under house arrest.

Ceccaldi said Saif al-Islam wanted to “contribute to the political unification of Libya” and “fight against terrorism,” in reference to the Islamic State group, which has taken over key parts of the north African country.

Another lawyer, Karim Khan, said Wednesday that Saif al-Islam was released under an amnesty declared by the Tobruk parliament, the internationally recognised authority that governed part of Libya before the national unity government of Fayez al-Sarraj took over in March.

The lawyer said the release was made "in accordance with (Libyan) law".

Khan declined to say whether he had spoken to his client, saying only that he "is well and safe and in Libya".

Saif al-Islam had been held since 2011 by a militia in Zintan, a mountainous western region beyond the control of authorities in the capital, Tripoli.

His captors refused to transfer him to Tripoli, where he was sentenced to death in absentia by a court in the city in July 2015 for his part in the killing of protesters during the uprising that toppled his father.

The verdict had drawn condemnation abroad, with Human Rights Watch saying the trial was riddled with legal flaws and carried out amid widespread lawlessness undermining the credibility of the judiciary.

The proceedings began in April 2014 before fighting between rival factions in Tripoli erupted, and the power struggle has loomed large in the unravelling of state authority around the vast, oil-producing North African country.

Saif al-Islam is also wanted by the International Criminal Court (ICC) in The Hague, which issued an arrest warrant in 2011 on preliminary charges of crimes against humanity, murder and persecution for being part of the inner circle of his father’s regime.

Khan said he would file an application to make the ICC case inadmissible, arguing that his client has already been tried by his home country.

Invoking the principle of "double jeopardy", he said: "It is prohibited to try an individual twice for the same offense".

Asked whether dropping charges against Saif al-Islam would hurt reconciliation efforts in the war-torn country, the lawyer said it was "up to Libyans to decide what is best for peace and reconciliation", not the ICC.

According to a source quoted by French daily Le Monde, he has been living in Zintan in a “comfortable house with a new wife and their three-year-old daughter”, and able to move around freely.

Looks like the Zintanis had chopped off his finger or two, but they left the other body parts alone. He managed to marry and knock someone up while on death row.

Re: Saif al-Islam at large after being released from death row#14700606

This is a serious question!

You seem to treat politics as some kind of *sport[…]

And with all the recent deaths in Spain, it would[…]