I expect lots of funny things to be posted. 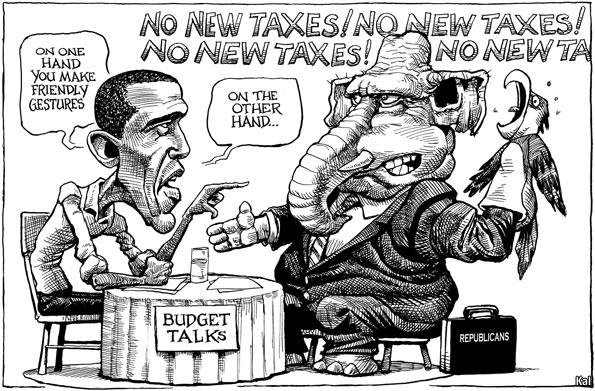 Why are fire trucks red? Fire trucks use water to extinguish fires. All water eventually reaches the ocean. The ocean contains fish. Fish have fins. People from Finland are called Finns. Finland was once at war with Russia. Fire trucks are always rushin' around. That's why fire trucks are red Gene Weingarten wrote:We’ve entered the final stretch of the presidential election, and it has become apparent that Mitt Romney actually won’t release any more back tax returns, on the moral principle that nobody can make him, so neener, neener. Clearly, Romney has decided that whatever is in those returns is worse than the daily pounding about this that he is getting from his opponent, from the media and even from his own supporters.

On one hand, it would be unfair and irresponsible of me to baselessly speculate about what embarrassing facts those tax returns might reveal. On the other hand, no one can stop me, so neener, neener.

If there’s a smoking gun, I predict it’s going to be one or more of the following:

His actual legal name is neither Mitt nor Willard. It is Tiffani.

He has a controlling interest in the Impossible to Open Packaging Company, the Speed Trap Camera Mfrs. of America and/or the No You Can’t Ever Reach a Human corporate-voice-mail development company.

He is still paying down a huge settlement for an ill-fated high-school prank in which a classmate unfortunately drowned in a toilet.

He employs a hair stylist, massage therapist and self-esteem counselor for the dancing horse.

His tax-shelter plan is so shrewd that he is, technically, indigent. He qualifies for, and uses, food stamps.

He lists $2.4 million in gambling losses from individual $10,000 bets he made with other politicians on whether he can prove his facts.

He owns an orphanage full of children with the same organ-tissue types of all his family members.

His butler has a six-figure salary, as does his butler’s butler.

He takes depreciation on a yacht named I Am Better Than You.

In addition to his car elevator, he also has a horse elevator and a moneybag elevator.


His household staff includes a jester, a food taster and, for Ann, a lady-in-waiting. He deducts the cost of whips for flogging the servants.

He writes off his extensive remedial “acting like a person” lessons.

Every year, he takes a business deduction for leasing his sons from Central Casting.

He files two tax returns every year, once as old-school liberal Mitt and one as tooth-gnashing, conservative Mitt. The IRS commissioner has specifically ruled this okay, saying they are “two different people entirely.”

After firing his brother-in-law, Murray, he offshored his tax prep to the accounting firm of Rajnish & Hasbani, of Peshawar. It charged him $115, based on 200 hours of billable time.

Of course, maybe it’s none of the above. Maybe we’re thinking about this all wrong, and Romney isn’t afraid of looking like a rich, elitist snob who games the system and pays only a 15 percent tax rate. Maybe he’s afraid of looking like a sucker. Remember, the tax returns in question are from 2009 and before. Maybe Mitt is humiliated to have to admit that when he trusted his American brother-in-law, he was paying 37 percent taxes, just like all the rest of us ordinary middle-class dirtbags.

Personally, I think its because his real name is Tiffani

This never gets old!

In fact, saved to hard drive!

Probably explains the low number of dildo-related murders in the area.

"12.7 END OF WORLD. In the event that the world as known to mankind shall come to an end, whether through natural forces (including, without limitation, plague, drought, earthquakes, hurricanes, and floods), manmade forces (including, without limitation, nuclear or biological war, pollution and global warming), or divine forces (including, without limitation, the Second Coming, the Mayan Cataclysm, and the Rapture, regardless of religious affiliation of Bank or Borrower), then, in such event, all outstanding principal, interest, fees and charges remaining under the Loan Documents shall immediately become due and payable to Bank at Bank’s offices or designated shelter, without notice of any kind of character, all such notice being hereby waived by Borrower, and Borrower agrees that the end of the world shall not be deemed or construed to constitute a valid excuse or defense to payment; provided further, that in the event that the end of the world shall be divinely inspired, then, in such event, Borrower further agrees that Bank shall be aligned with forces of goodness and light, and Borrower shall be aligned with the forces of evil and darkness, and that Borrower shall be cast into a pit of fire until all sums owing under the Loan Documents, including attorney fees, shall be fully paid; provided further, that in the event that Borrower should be reincarnated subsequent to the end of the world, whether as an animal, vegetable or mineral, then, in such event, Bank shall have and possess, in addition to the collateral stated in the Loan Documents, a security interest in all of Borrower’s useful products, including, without limitation, any and all fur, hide, meat, edible portions, medicinal properties, and mineral rights, to further secure the prompt payment of all sums owing under the Loan Documents."
Labor is prior to, and independent of, capital. Capital is only the fruit of labor, and could never have existed if labor had not first existed. Labor is the superior of capital, and deserves much the higher consideration.