Sorry for my horrific English :)

The temple looks like a toy, but in fact it is a large building, standing much further

Like
-  05 Feb 2018 07:48 #14885805
Somewhere a week ago, as part of a school assignment, my daughter and I made a bird feeder. But in the courtyard is the XXI century. So I decided to hang the feeder not somewhere in the street, but outside. And sent there a Web camera. Put a program that takes pictures when changing the picture. Birds for a long time ignored the trough, but today the first titmouse arrived. Unfortunately, the titmice eat animal food, but we only have a vegetable in the food trough. It will be necessary to expand the menu

Seeds contain oil which is good for them to survive in the cold.

Also keep an eye on the feeder and see which animals come to feed.
It might be a good idea to use a real bird feeder with a smaller entry for the birds, otherwise squirrels and crows can come and eat everything once they find it.

Good luck, I appreciate your postings.

Like
-  05 Feb 2018 07:59 #14885811
Meanwhile, in Moscow, winter continues. Over the past two days, the monthly snowfall rate has fallen. In many places the snow lies knee-high. Communal services work continuously, but do not have time to clean all this snow. 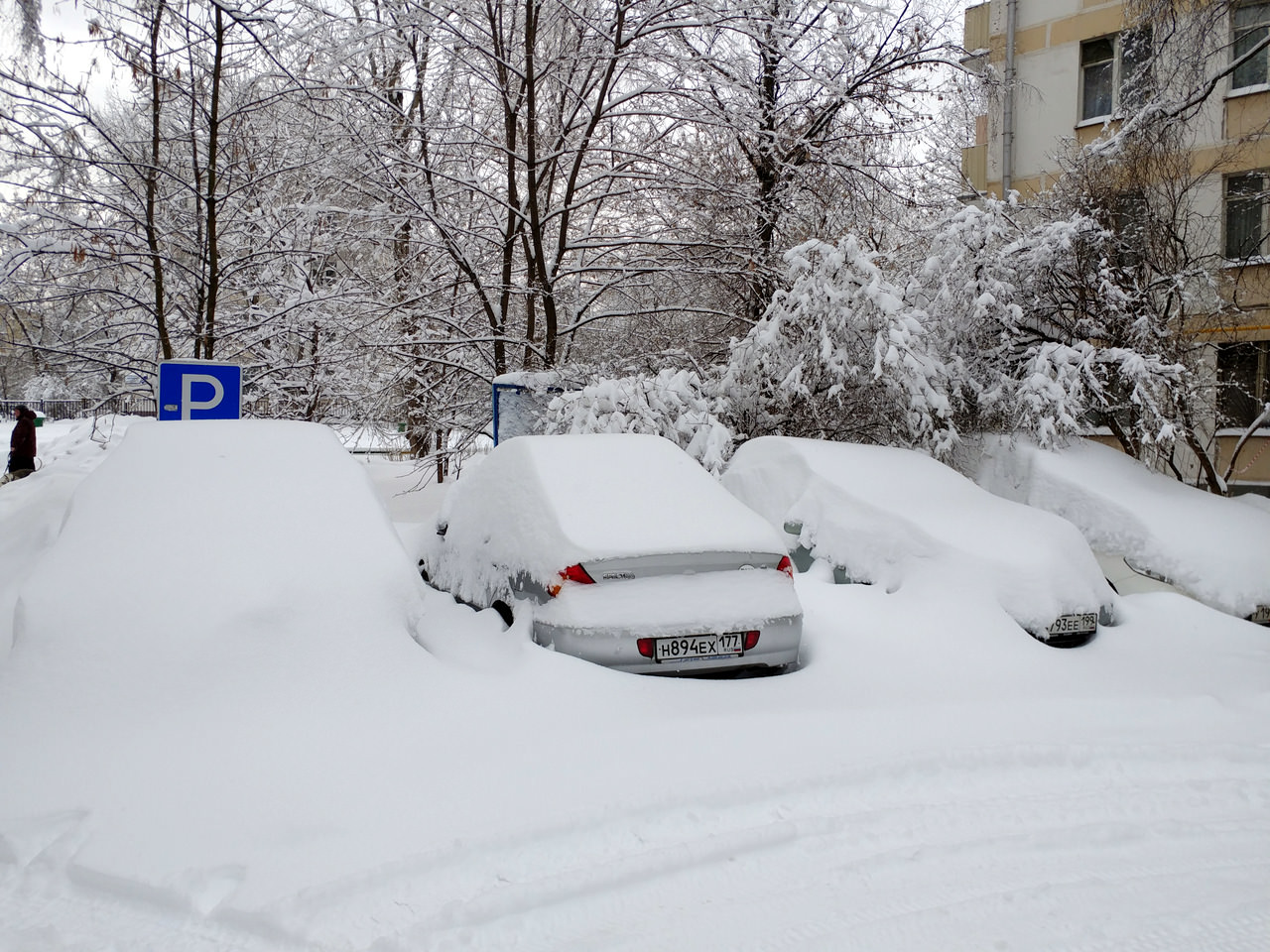 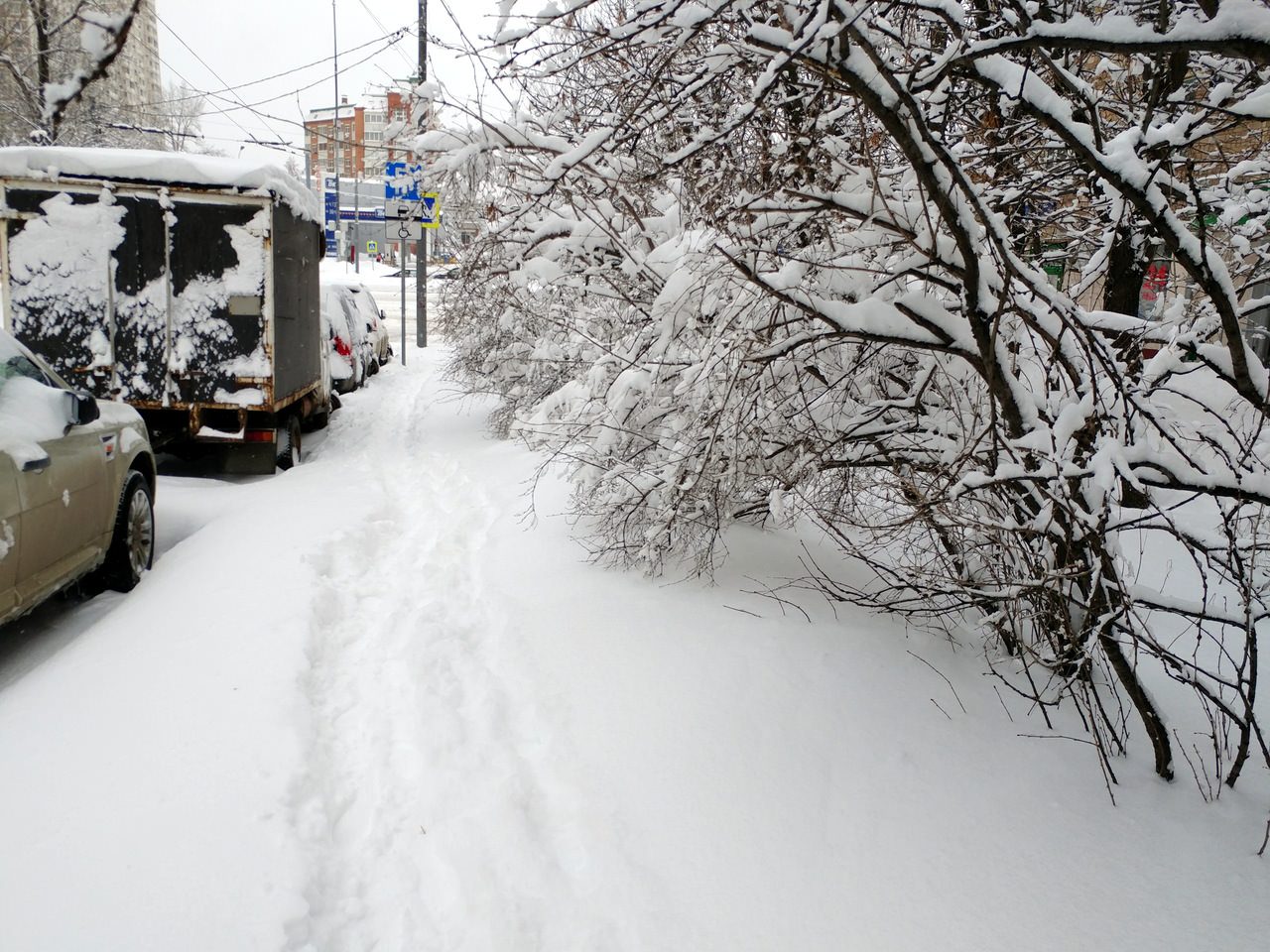 Ter wrote:@Balancer
Get them some seeds of different varieties.

Yes, there are seeds there, just now they were covered with snow. I do not want to open the window on the frosty street and clean it while it's snowing. I'll clean it from snow when it's snowing

Squirrels in our area do not live. Yes, they can not get to the fifth floor of the concrete house. Proteins live only in the neighboring forest a mile from us.

The crow is many, but while the feeder is not interesting to them

The translator encountered a mistake in semantics. In Russian, the words Squirrel ("BElka") and Protein ("BelOk") in some forms are written in the same way, for example, in the plural (Squirrels = "BElki" = "BelkI" = "Proteins". I mark the accent with a large letter - it is different in these words). Google Translate on the plural translated as "Proteins in our area do not live"

Funny story. If you change the word "protein" ("belOk") in russian analogue of the possessive case it begins to be written exactly as the "squirrel". Albeit with a different accent, not at first and on the second syllable - "bElka" and "belkA".

Once such was translated the institute title the website. "Moscow Institute of protein". In Russian — "Institut belkA". The translator translated as "Squrrel institute". As such, the name got on the official site

Balancer wrote: The translator translated as "Squirrel institute". As such, the name got on the official site

We have some similar issues here in Bengali:
"jute" and "fart" are both called "path". The pronunciation is a little bit different.

Ter wrote:"jute" and "fart" are both called "path". The pronunciation is a little bit different.

This, by the way, is a serious problem for those who study English

Russian is more information-intensive and therefore small changes in pronunciation do not affect understanding. And the sensitivity to pronunciation among Russian speakers is lower. Because of this, we can hardly distinguish between "ship" and "sheep" or "beach" and "bi*ch"

These words sound absolutely identical for us. It remains only to guess how the native speakers of English understand the Russians who say these words

"I went to the beach" in Russian performance, some laughs

I, behold, I recently listen to the song T Bone Burnett "It's not too late".

Balancer wrote:In Russia this shame became a meme and then long remembered (although the error was quickly corrected).

I trust the Trotskyite wrecker responsible for this act of sabotage was dealt with appropriately, Balancer.

Potemkin wrote:I trust the Trotskyite wrecker responsible for this act of sabotage was dealt with appropriately, Balancer.

Balancer wrote: The translator translated as "Squirrel institute". As such, the name got on the official site

We have some similar issues here in Bengali:
"jute" and "fart" are both called "path". The pronunciation is a little bit different. 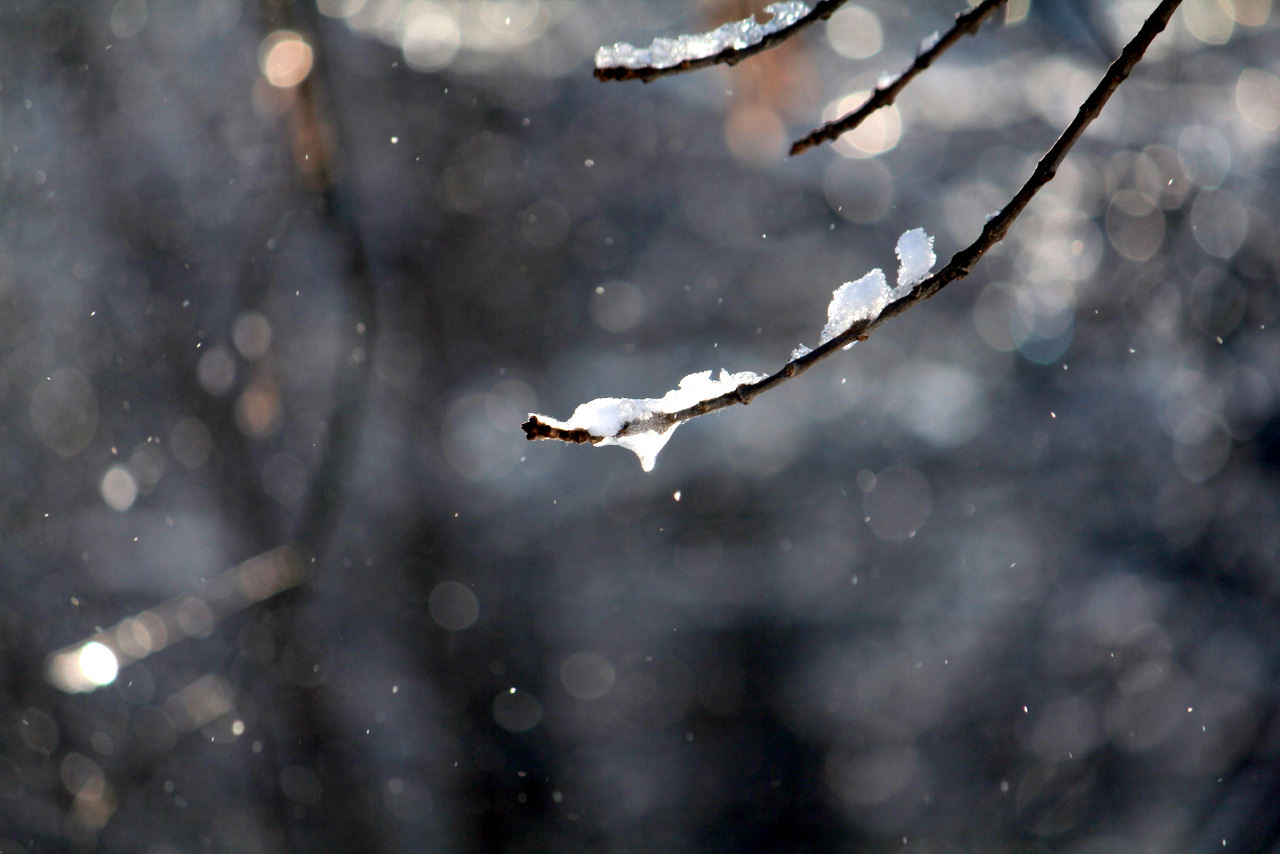 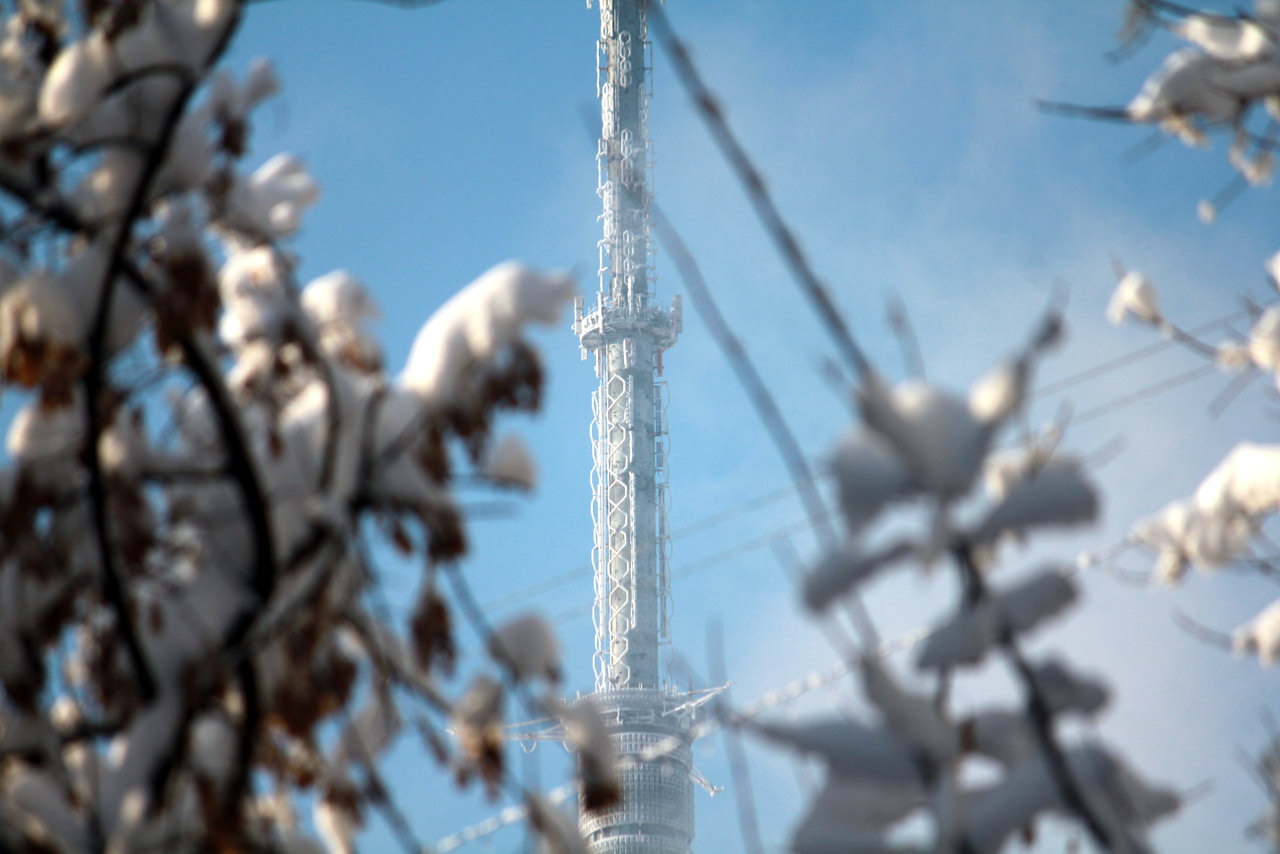 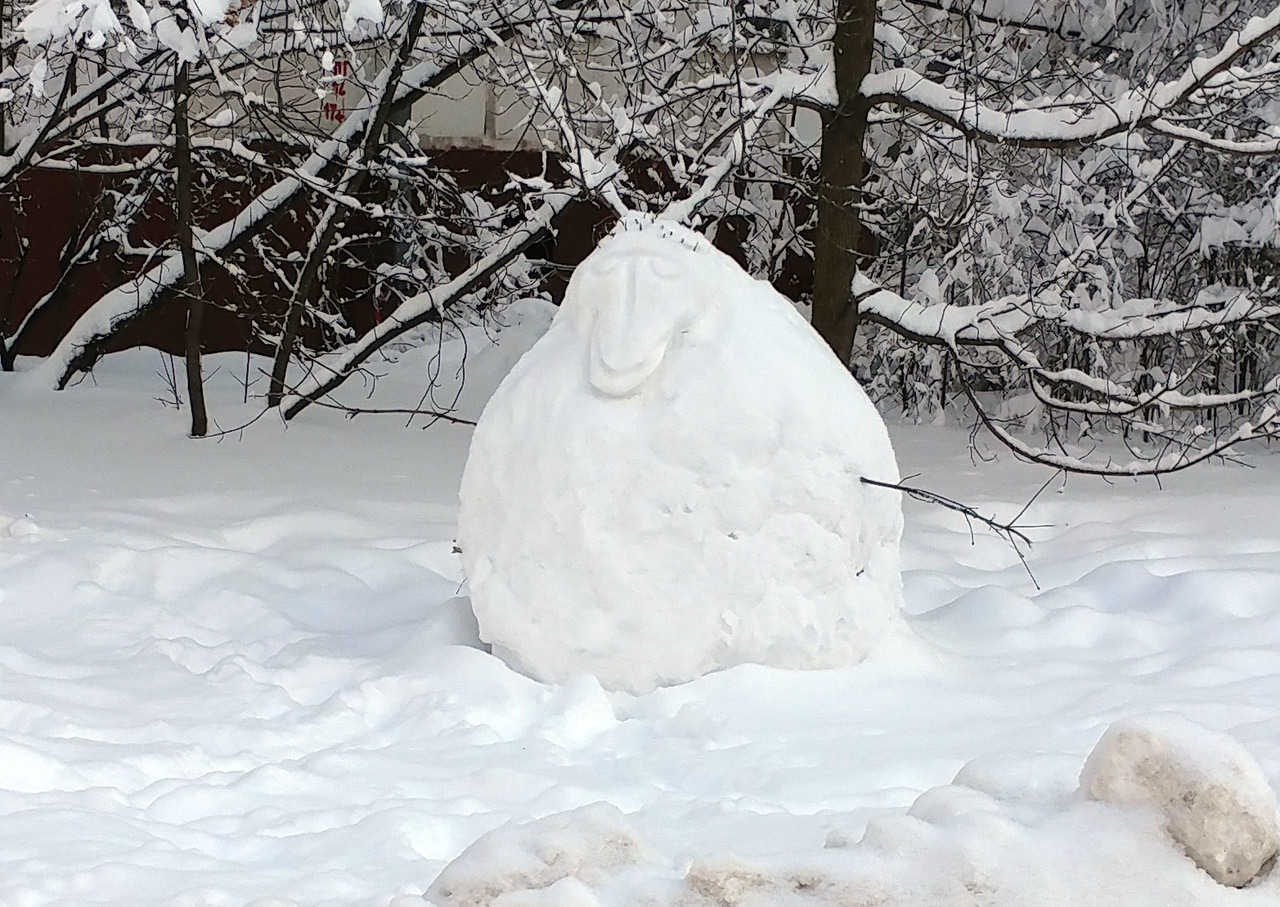 Decky wrote:That could do with a guard rail.

In ancient times, the valleys of Dagestan were too valuable a place to settle them. There are few arable land. Therefore, people settled in the mountains, in places unsuitable for farming. At the same time it helped create additional protection from attacks.
... to understand recursion, you must understand recursion ...

Like
-  01 Mar 2018 06:17 #14892790
Last night I burned myself to the central heating battery. I took an IR thermometer and measured the temperature. 94.0 °C (201.2 °F). The municipal services decided to resist frost, the promised weather forecast. Heating system in my house is old, the degree of heating is not regulated. He called the communal service, they answered that it was normal. We have to open the windows to the street and warm the atmosphere. Russia is a generous soul!

Like
-  10 Mar 2018 16:52 #14895080
My wife was returning home from work. At the entrance of the house two drunken guys gave her two huge bouquets of tulips. And in every door handle in the apartments of our house - the flowers are stuck

This, apparently, the people continue to celebrate the women's day, the 8th of March

Agreed. But my whole argument is that America w[…]

In other words, Syria isn't expansionist itself, b[…]

I feel that this proposal , by Otto Strasser , wo[…]