'The Times' censor US Congress Resolution

The Times wrote:There seems little doubt that Dowden and Johnson share similar views. Take the cultural treasures held by Britain’s museums such as the Parthenon Marbles and Benin Bronzes. Johnson told a Greek newspaper this month that the government’s “firm longstanding position on the [Parthenon] sculptures is that they were legally acquired by Lord Elgin under the appropriate laws of the time”.

Dowden goes further: “Once you start pulling on this thread where do you actually end up? Would we insist on having the Bayeux Tapestry back? American institutions are packed full of British artefacts. Japan has loads of Chinese and Korean artefacts. There is an exceptionally high bar for this . . . because I just don’t see where it ends. You go down a rabbit hole and tie up our institutions. I think it is just impossible to go back and disentangle all these things.

“The British Museum is a majestic cultural institution where I think you are enriched by being able to see the Rosetta Stone, magnificent Egyptian sarcophagi, the Benin Bronzes, which are a wonderful piece of global cultural heritage that have influenced Picasso and others. And it is not just for the British people. It is a museum of the world for the world and I know it has a lot of important partnerships. They are working with their counterparts in Nigeria on the archaeology of the Kingdom of Benin for example.”

Dowden said that while he loved the Benin Bronzes, he had “never related that much to the Parthenon Sculptures” until the museum’s director, Hartwig Fischer, “showed me around and told me the story in wonderful depth, revealing a whole different level of the artistry which I found really inspiring”. He adds: “Would they have survived the Nazis rampaging through Athens during World War II. It is a slightly trite argument but there is a truth. Would the Benin Bronzes have survived various international conflicts?”

He adds: “Yes I do [have digital fatigue]. I have really hated this lockdown in a way I haven’t hated previous ones. There is no novelty to a conversation like this. No novelty to sorting out your garden. It is just a slog and it has genuinely taken a real toll on people’s mental health. We have got to get the joy back into people’s lives through arts and culture: there is a joy in seeing wonderful paintings, seeing great entertaining shows, hearing marvellous orchestras perform, going to festivals. “I really want to get some of the joy back this summer and I think we can do it.”

And consequently informed of the US Congress Resolution, but it was not to be: 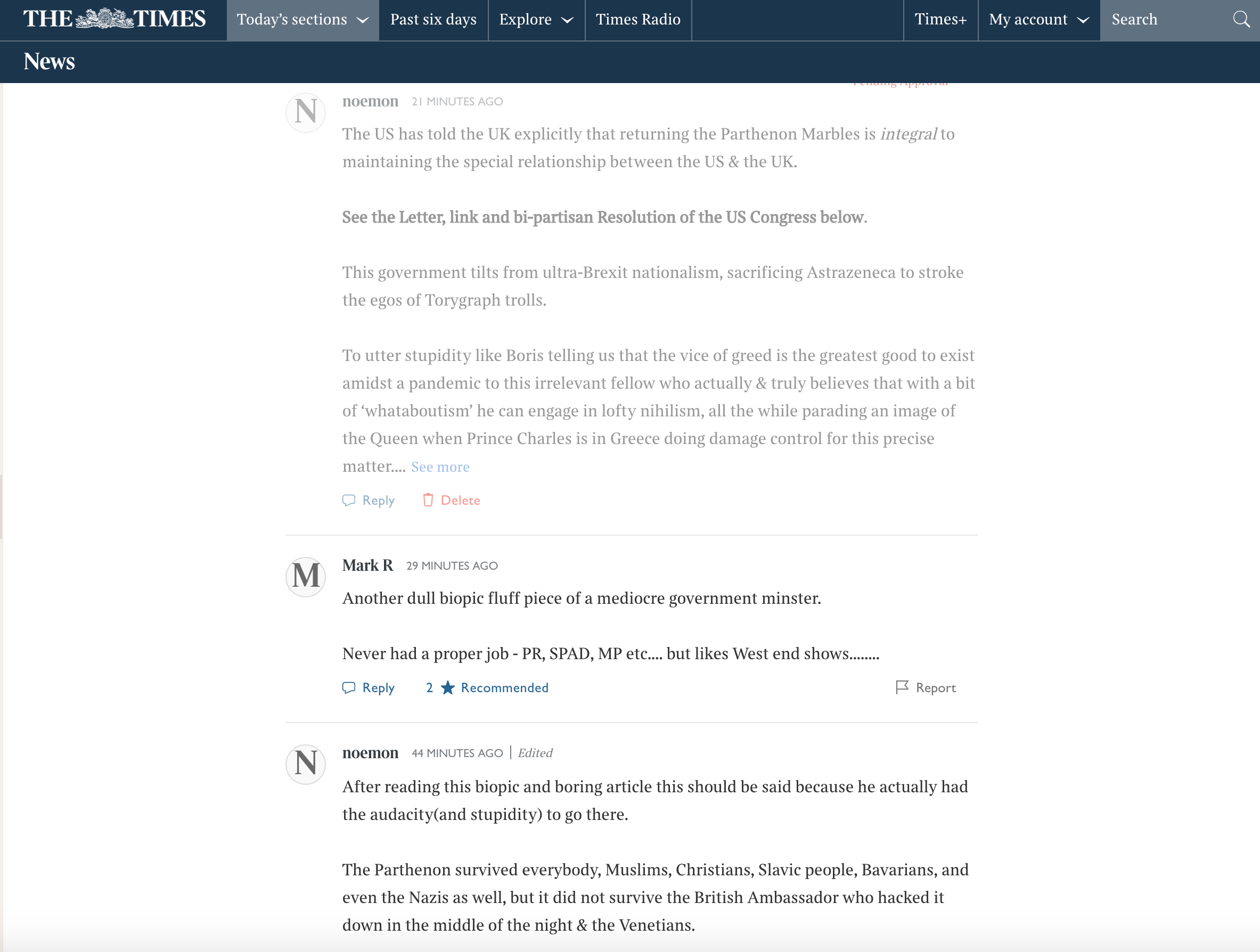 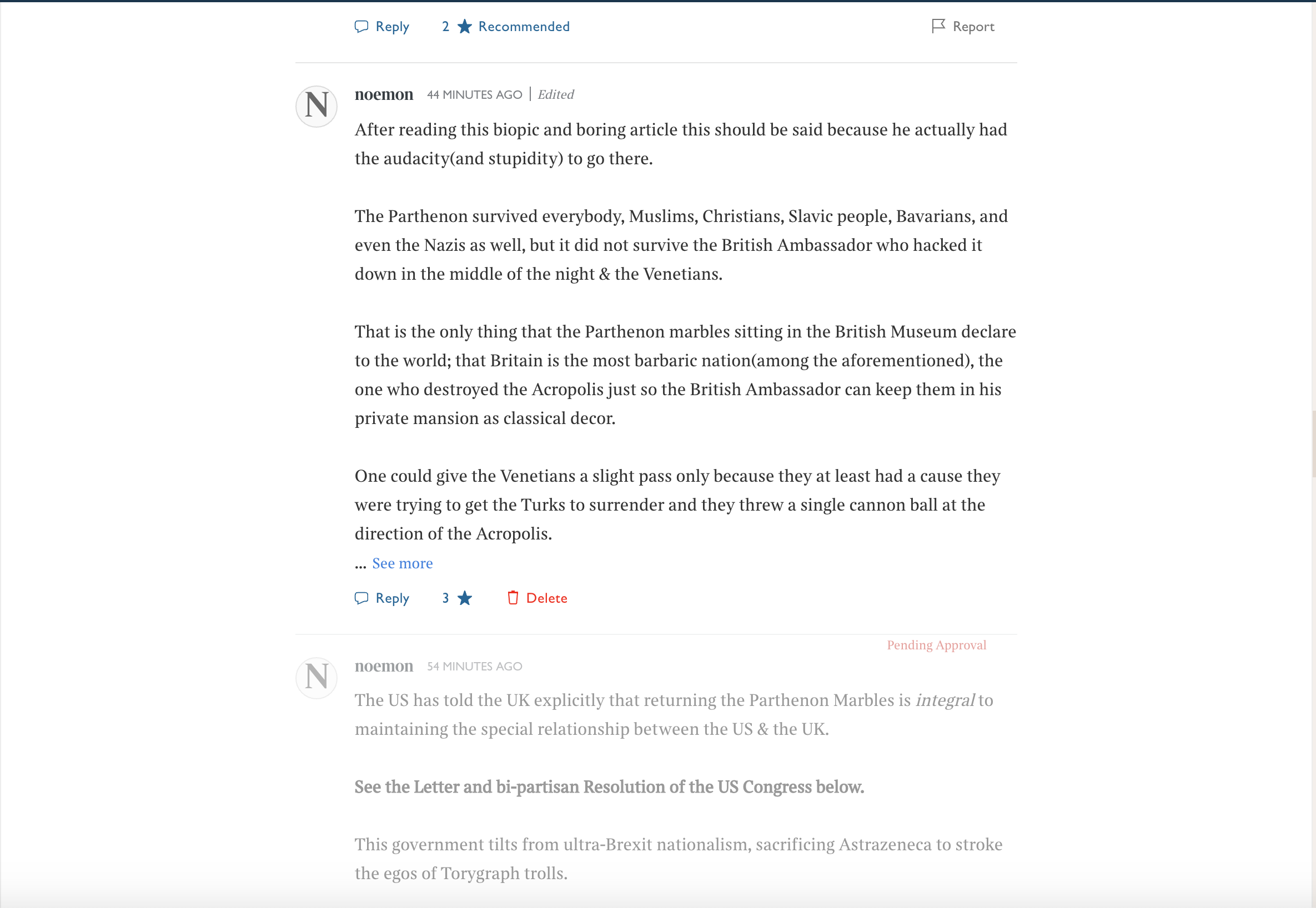 The UK's Minister of Culture totally oblivious that the Parthenon Frieze did actually survive the Nazis but not the British, though ironically that was not the comment that got censored.

It's the US Congress' Letter and Resolution that has been censored.
EN EL ED EM ON

"Torygraph", which I guess is a derogatory term against the Telegraph, might land the Times in trouble if not censored. (EDIT: This, or the Times are actually controlled by Tories so they don't like you so visually bashing them)

For experiment purpose, did you try to re-post the part of your comment up to the link to the resolution and see what happens?

Patrickov wrote:I guess the censorship was not because of the resolution, but the emotional comment below.

"Torygraph", which I guess is a derogatory term against the Telegraph, might land the Times in trouble if not censored. (EDIT: This, or the Times are actually controlled by Tories so they don't like you so visually bashing them)

For experiment purpose, did you try to re-post the part of your comment up to the link to the resolution and see what happens?

I did indeed mate. It's the US Congress Resolution that is the problem. 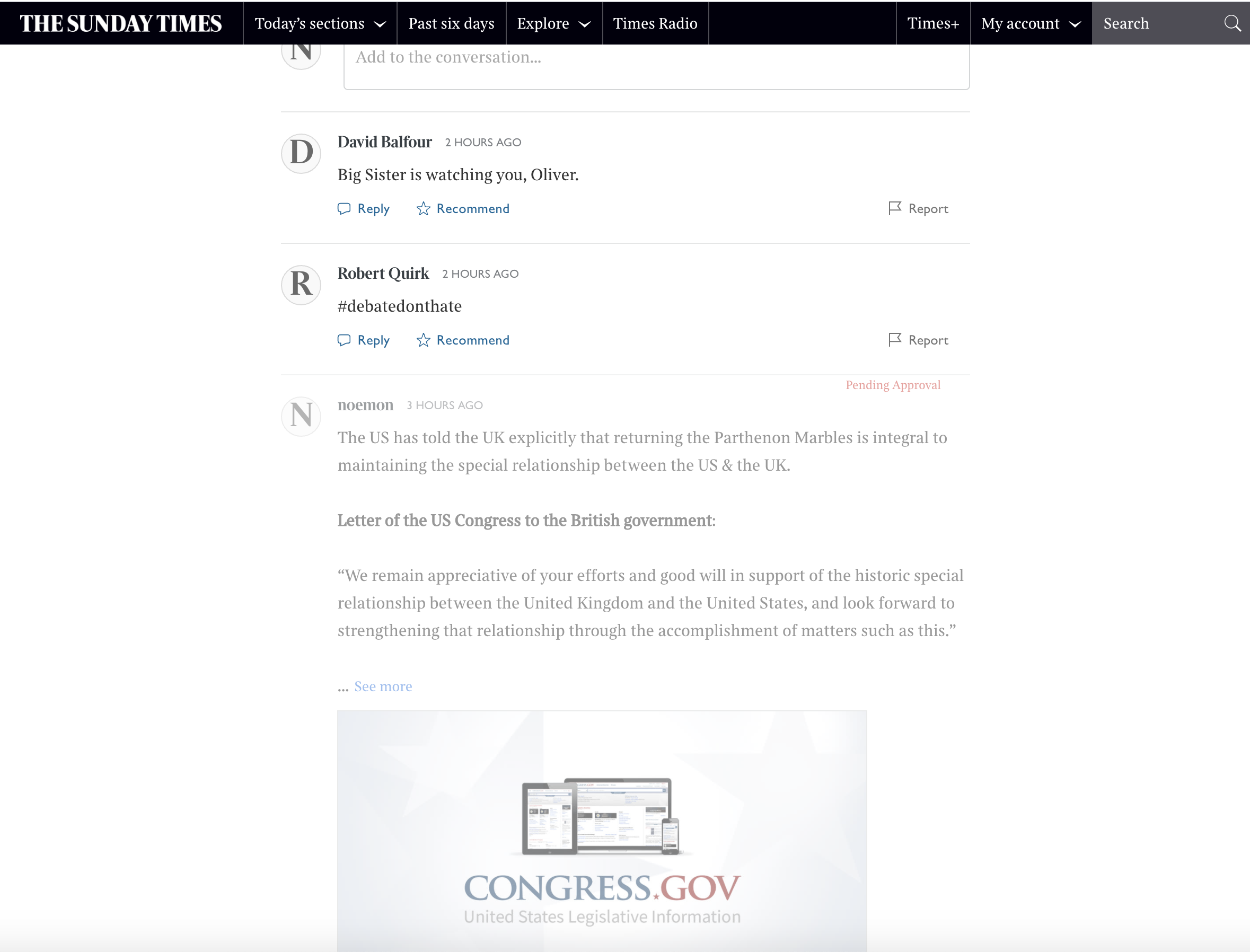 Reply
Return to “Today's News”
06 May

Do understand how consent legally works? Because t[…]

How was Korea unjust? How was WW2 unjust? Cold […]

Preferably yes. I am not sure if Oil and Gas sanc[…]

Man went away on holiday during one kf the worst b[…]