Like 1
-  20 Oct 2021 16:01 #15195064
Starting with sensationalist claim, more or less "GLOBAL SOUTH IS DOOMED". The bus has been missed and I don't think anyone in the Global South with a population of more than 10 million can reach the coveted state of a Developed Nation i.e. A lifestyle matching the Global North unless a miraculous technological breakthrough on scale of steam engines or penicillin happens that can't be predicted. Of course, except China, the only nation in Global South reaching that coveted status and even that's going to be arduous.

The gap between north and south has only widened post WW2 and is widening currently rather than any convergence happening. Technological discrepancy is often attributed as why North dominated South starting from the colonial age, but that discrepancy hasn't decreased, but only increased and continues to do so, ffs forget 5th generation fighter planes, South can't produce a modern well functioning rifle. The only thing that has changed is there is more political cohesion, even that's not true in large parts of Africa and there is just no need for an imperial post office in the colonies, the core can and is still dominating its colonies although not directly. Meanwhile the political discourse in most of the global south is extremely reactionary, not a fertile ground for taking necessary corrective measures.

The fact is that in 2019 an average US farm worker was 69 times more productive than an average Indian farm worker. That's just too huge a gap to be filled, and is not going to dissipate anytime soon, especially when you consider that the trend so far since ww2 has been of a gap that is widening.

So basically this is the future for most of the global south, most of the population is going to be wretched and a lifestyle on par with global north is going to be a pipe dream. Very few will escape to the Global North and become part of labor aristocracy there. Then the vagaries in climate are going to fuck the south a lot harder evaporating any miniscule progress that has been made.
"Reason has always existed, but not always in a reasonable form." Karl Marx

Re: Global North, Global South, and Imperial core. Depressing musings about the future#15195068

Re: Global North, Global South, and Imperial core. Depressing musings about the future#15195088

fuser wrote:The gap between north and south has only widened post WW2 and is widening currently rather than any convergence happening.

To my knowledge India isn't uniformly underdeveloped either. It varies widely from region to region.

Re: Global North, Global South, and Imperial core. Depressing musings about the future#15195091 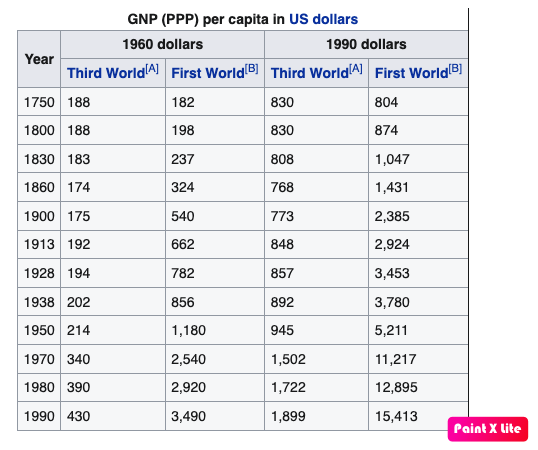 As per India, yeah the development is quite uneven depending on the region, but the issue is that post independence, there hasn't been really a major change in developed regions but has followed the trend of pre-independence where it seems that everyone is stuck at their starting point in terms of their relative prosparity.
"Reason has always existed, but not always in a reasonable form." Karl Marx

Re: Global North, Global South, and Imperial core. Depressing musings about the future#15195120

fuser wrote:Not really, without going in much detail here is a simple chart for gdp per capita on wiki : https://en.wikipedia.org/wiki/List_of_r ... t_GDP_(PPP)_per_capita. Granted the chart here is till 1990 but apart from China this gap is only widening everywhere. In the following image compare the data between 1950 and 1990.

The ratio between US GDP per capita (PPP) and Indian GDP per capita has almost halved since 1990. Meaning Indians are twice a rich relative to the US than 30 years ago.

China is a different beast of course.

Perhaps... there are things you can do to mitigat[…]