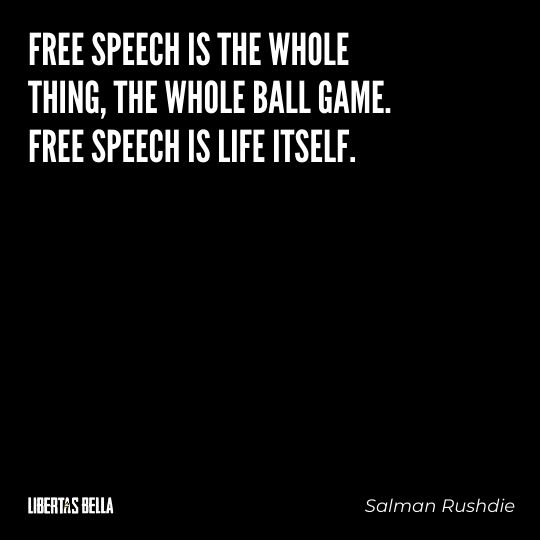 Listen: A blog post isn’t going to change anyone’s mind about free speech. Freedom of speech quotes, however expertly they may have been curated, are not poised to make some pink-haired, nose-pierced, garishly-tattooed liberal arts student put down their hashtag pitchfork and reconsider whether they’re actually doing good by demanding the public crucifixion of anyone whose point of view falls right of Mao Zedong’s.

“Hate speech isn’t free speech.” This axiom, whenever it is bleated, should make any rational person’s skin crawl. It supposes that speech can be classified as acceptable or unacceptable, and that someone has the duty to suppress the latter class.

No one has, and no one ought to. Perhaps in a perfect world there could exist a ruling body which genuinely keeps its people’s best interests in mind when it bans the expression of objectively hideous sentiments. But this ain’t no perfect world, babe. If you’ve ever stepped on a wet patch of floor right after you put on fresh socks, then you have to know it.

The second you create authority, only authoritarians will allow themselves to have it. Let them control what you’re able to say, and the second it gives them an advantage they’ll slam the Overton window shut so hard it’ll cut off your fingertips. Justify restricting speech to protect the oppressed until you’ve run out of breath; it won’t change the fact that the oppressed are never the ones who control what others are allowed to say.

“Allowed to say!” We shouldn’t even be allowed to say such words. No one really gives a rat’s patoot what anyone has to say, anyway. It’s what they’re able to think that counts, and that’s the absolute devilry behind all of it. What your enemies really want is to control your thoughts. Removing your tongue is just outpatient lobotomy.

““In those wretched countries where a man cannot call his tongue his own, he can scarce call anything his own. Whoever would overthrow the liberty of a nation must begin by subduing the freeness of speech; a thing terrible to publick traytors.”
– Benjamin Franklin

“Reason and free inquiry are the only effectual agents against error.”
– Thomas Jefferson

“For if Men are to be precluded from offering their Sentiments on a matter, which may involve the most serious and alarming consequences, that can invite the consideration of Mankind, reason is of no use to us; the freedom of Speech may be taken away, and, dumb and silent we may be led, like sheep, to the Slaughter.”
– George Washington

“A popular government, without popular information, or the mean of acquiring it, is but a prologue to a farce or a tragedy; or perhaps both. Knowledge will forever govern ignorance; and a people who mean to be their own governors must arm themselves with the power which knowledge gives.”
– James Madison

“To announce that there must be no criticism of the President, or that we are to stand by the President, right or wrong, is not only unpatriotic and servile, but is morally treasonable to the American public.”
– Theodore Roosevelt

“Once a government is committed to the principle of silencing the voice of opposition, it has only one way to go, and that is down the path of increasingly repressive measures, until it becomes a source of terror to all its citizens and creates a country where everyone lives in fear."
– Harry S. Truman

“He that would make his own liberty secure must guard even his enemy from opposition; for if he violates this duty he establishes a precedent that will reach to himself.”
– Thomas Paine

“The communists and the Nazis are merely two variants of the same evil notion: collectivism. But both should be free to speak – evil ideas are dangerous only by default of men advocating better ideas.”
– Ayn Rand

“The smart way to keep people passive and obedient is to strictly limit the spectrum of acceptable opinion, but allow very lively debate within that spectrum...”
– Noam Chomsky

“The only thing that should be upheld at all costs and without qualification is the right of free expression, because if that goes, then so do all other claims of right as well.”
– Christopher Hitchens

“My own opinion is enough for me, and I claim the right to have it defended against any consensus, any majority, anywhere, any place, any time. And anyone who disagrees with this can pick a number, get in line, and kiss my ass.”
– Christopher Hitchens

“Freedom of speech is freedom above all for those whose views you dislike most.”
– Peter Hitchens

“Proclaim the truth and do not be silent through fear.”
– St. Catherine of Siena

“If liberty means anything at all, it means the right to tell people what they do not want to hear.”
– George Orwell

“If large numbers of people believe in freedom of speech, there will be freedom of speech, even if the law forbids it. But if public opinion is sluggish, inconvenient minorities will be persecuted, even if laws exist to protect them.”
– George Orwell

“I may not agree with you, but I will defend to the death your right to make an ass of yourself.”
– Oscar Wilde

“This is slavery, not to speak one's thought.”
– Euripides

“It is the rare fortune of these days that one may think what one likes and say what one thinks.”
– Tacitus, Histories of Tacitus

“If there be time to expose through discussion the falsehood and fallacies, to avert the evil by the processes of education, the remedy to be applied is more speech, not enforced silence."
– Louis Brandeis

“If there is any fixed star in our constitutional constellation, it is that no official, high or petty, can prescribe what shall be orthodox in politics, nationalism, religion, or other matters of opinion or force citizens to confess by word or act their faith therein.”
– Robert H. Jackson

“Freedom to differ is not limited to things that do not matter much. That would be a mere shadow of freedom. The test of its substance is the right to differ as to things that touch the heart of the existing order.”
– Robert H. Jackson

“Every legislative limitation upon utterance, however valid, may in a particular case serve as an inroad upon the freedom of speech which the Constitution protects.”
– Stanley F. Reed

“If there is a bedrock principle underlying the First Amendment, it is that the government may not prohibit the expression of an idea simply because society finds the idea itself offensive or disagreeable.”
– William J. Brennan, Jr.

“Censorship reflects a society’s lack of confidence in itself. It is a hallmark of an authoritarian regime…”
– Potter Stewart

“Liberals can understand everything but people who don't understand them.”
– Lenny Bruce

“There is more than one way to burn a book. And the world is full of people running around with lit matches.”
– Ray Bradbury

“The American fascist would prefer not to use violence. His method is to poison the channels of public information.”
– Henry A. Wallace

“As a nation, we've been through too many fights to preserve our rights of free thought to let them go just because some prude with a highlighter doesn't approve of them."
– Stephen King

“Restriction of free thought and free speech is the most dangerous of all subversions. It is the one un-American act that could most easily defeat us."
– William O. Douglas

“The claim ‘hate speech is not free speech’ implies ‘free’ is a type of speech, as opposed to how speech is treated in a free society.”
– Michael Malice

“Demand to be challenged, to be offended, to be treated like thinking, reasoning adults. And raise your children to be the same. Don't let a comedian, a network, a Congressional committee, or an evil genius take away your freedom to laugh at whatever you want.”
– Duckman

Sanjay admits several times in the video that CNN[…]

What are you saying the Republicans are 'doing' -[…]