Frederick Douglass Quotes About Slavery That Apply to Everybody - Politics Forum.org | PoFo

Frederick Douglass Quotes About Slavery That Apply to Everybody

Frederick Douglass Quotes About Slavery That Apply to Everybody#15195094 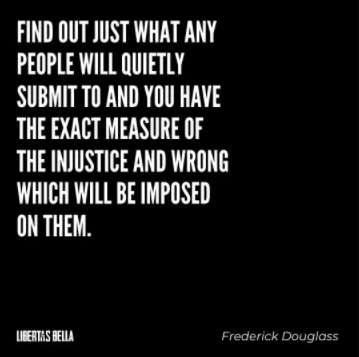 Knowledge makes a man unfit to be a slave.

Slavery, regardless of whom is enslaved, is evil in one of its purest forms. In the United States we are most familiar with the enslavement of the African American – as we rightly should be – although the sin has been committed against men and women of all races across the world and throughout history. This is why Frederick Douglas quotes will always remain relevant.

It is estimated that one in ten North Koreans are currently enslaved by their dictatorship. India leads the world, so to speak, with over 18 million slaves, the vast majority of whom belong to the Dalit caste. And thanks to human trafficking, tens of thousands of people living in America are enslaved right now.

When you see your fellow man clad in chains, forced to work, and quite literally owned, it is easy to call them a slave. But whether or not the unfettered can also be deemed slaves depends on your worldview.

A slave is legal property who is forced into obedience. By that definition, could the entire population of North Korea be considered enslaved? Quite arguably, yes, and given that one must wonder at what point a government becomes its citizens’ master. If it extorts money from them in the name of taxation, drafts them to fight in foreign wars for profit, and imprisons them for viciously long amounts of time for minor, nonviolent infractions, at what point does the government’s actions become indistinguishable from the crack of a planter’s whip?

None of this is to assert that Americans or most people in other countries are slaves. To do so would be to make too little of the plight of slaves past and present. What I wish to point out is this: The writings of Frederick Douglass, one of our country’s most brilliant abolitionists, are not to be looked at solely through the lens of American history. Nearly any of the social reformer’s insights may be applied on a far grander scale as you ask yourself what it actually means to be free, and how the actions of your government can subject you to slavery – with your total complacency.

"One and God make a majority."

"Without a struggle, there can be no progress."

"The soul that is within me no man can degrade."

"Freedom is a road seldom traveled by the multitude."

"Slaves are generally expected to sing as well as to work."

"It is easier to build strong children than to repair broken men."

"The thing worse than rebellion is the thing that causes rebellion."

"At a time like this, scorching irony, not convincing argument, is needed."

"Power concedes nothing without a demand. It never did and it never will."

"A gentleman will not insult me, and no man not a gentleman can insult me."

"I didn't know I was a slave until I found out I couldn't do the things I wanted."

"I prayed for twenty years but received no answer until I prayed with my legs."

"The white man’s happiness cannot be purchased by the black man’s misery."

"The life of a nation is secure only while the nation is honest, truthful, and virtuous."

"The limits of tyrants are prescribed by the endurance of those whom they oppress."

"You have seen how a man was made a slave; you shall see how a slave was made a man."

"People might not get all they work for in this world, but they must certainly work for all they get."

"To suppress free speech is a double wrong. It violates the rights of the hearer as well as those of the speaker."

"I prefer to be true to myself, even at the hazard of incurring the ridicule of others, rather than to be false, and to incur my own abhorrence."

"Find out just what any people will quietly submit to and you have the exact measure of the injustice and wrong which will be imposed on them."

"Those who profess to favor freedom, and yet deprecate agitation, are men who want crops without plowing up the ground. They want rain without thunder and lightning."

"A battle lost or won is easily described, understood, and appreciated, but the moral growth of a great nation requires reflection, as well as observation, to appreciate it."

"Where justice is denied, where poverty is enforced, where ignorance prevails, and where any one class is made to feel that society is an organized conspiracy to oppress, rob and degrade them, neither persons nor property will be safe."

"Everybody has asked the question, and they learned to ask it early of the abolitionists, 'What shall we do with the Negro?' I have had but one answer from the beginning. Do nothing with us! Your doing with us has already played the mischief with us."

Frederick Douglass Quotes About Slavery That Apply to Everybody originally appeared on Thought Grenades, the blog on Libertas Bella
“A society that puts equality before freedom will get neither. A society that puts freedom before equality will get a high degree of both.”
– Milton Friedman

@colliric so you make it a good hobby to be conn[…]

I just can't understand how TtP can honestly ke[…]

I'd legalise prostitution, take it off the stre[…]

So you are comfortable ignoring clades altogether[…]