Lincoln: Another pharaoh, another Exodus

Like
-  11 Mar 2020 19:45 #15074513
The Egyptian religion and its central deity, the sun-god Re, never really disappeared, but continued in disguised form through other religions and secular beliefs.

Thus spoke Re: "I am Khepera at the dawn, and Re at noon, and Tem in the evening." Khepera (or Khepri) rolls the sun across the sky like the scarab rolls a ball of dung. He has the power of resurrection and self-renewal, bringing the sun back to life after it "dies" at night. Re at noon, depicted as a falcon, conveys power and wisdom, but also brings an unforgiving heat as the sun descends to earth. Tem (or Atum), represented by the water lily, carried the god force through the night, assuring its return in the dawn.

Re is represented in earthly form as a pharaoh or other an equivalent leader and in spiritual form, in which he traverses the sky in a sun boat and battles monsters of the underworld. In later stories of Re, the aging god confronts rebellious subjects. Through the “Eye of Re,” he summons a daughter, the lioness Sekhmet, who devours his enemies.

An incarnate of “Re at noon” can be found in Abraham Lincoln, whose “falling sun” scorched the earth in the Civil War. The president had several dreams that placed him aboard a ship, his “Boat of Re,” just before several Civil War battles, including those at Sumter, Bull Run, Antietam, Gettysburg and Vicksburg, where the Union battled the Confederate “monsters of the underworld.”

On Friday April 14, 1865, Lincoln told his cabinet about another ship dream, in which the vessel, with the sun shining brightly in the background, was approaching a peaceful shore. One cabinet member reported Lincoln as recalling the ship was “badly damaged.” We can interpret the dream to mean that by reaching land, Lincoln had reached the end of his voyage and the end of his life. The next day he was assassinated.

Re’s blood-thirsty daughter, Sekhmet, came to life as Harriet Beecher Stowe, whose 1852 anti-slavery novel Uncle Tom’s Cabin aroused the passions of both pro-slavery and anti-slavery readers and divided the country. When Lincoln met the author in 1862, the president reportedly commented, "So this is the little lady who started this great war.”

The Lincoln Memorial honors the president who freed the slaves. At Abu Simbel in Egypt, a similar seated figure depicts Ramesses II. Some scholars believe he is the pharaoh who, according to the Book of Exodus, was forced to release the "children of Israel" from bondage. 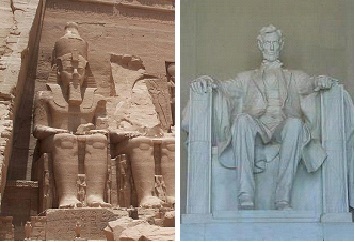 I'm not stuck on a two party system. I'm register[…]

1. Again, we have no evidence that it decreases b[…]

In other words, it goes back to that ongoing d[…]