A Dime out of Time - Politics Forum.org | PoFo

A Dime out of Time

Like
-  19 Jan 2022 21:04 #15208026
The November 2021 issue of Harper’s Magazine included excerpts from Libro de los Epitomes, summaries of books composed by Hernando Colón and his staff. Colón, the son of Christopher Columbus, wanted to build a library that contained every book in existence. The manuscript was discovered in 2019 in the collection of the Arnamagnaean Institute at the University of Copenhagen.

A portion of the work titled “Respected Teacher” included this passage: “The dialogue describes what goes on in places such as Deventer and Cologne, where during the matriculation rituals the little graduate bitches and other wicked scoundrels bombard the freshman with abuse and insults and human filth, and also shave him and inflict other indignities. Then the freshman has to take them all out and get them drunk on his own dime.”

The American expression “on his own dime” seemed out of place in that Colón died in 1539 and the minting of the U.S. dime did not begin until 1796.

At one point, I let my imagination run wild and thought a time traveler had gone back in time to witness the travels of Christopher Columbus, got a translation job with his son, and then inserted the modern expression in the text as a signal to a future reader that his time travel experiment had been successful.

Alas, the truth was more mundane. A query to the institute in Copenhagen brought this response from Professor Matthew Driscoll: “As I recall, our original translation read “at his expense”. The change was presumably made in order to make the text more chatty and colloquial – at the request of Harper’s, I would imagine. I agree that it sounds somewhat out of place. We will certainly not use formulations like that in the published translation.” 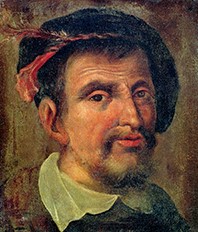 Reply
Return to “Early Modern”
17 May

No. You misunderstood. Again. You are supporti[…]

Well, NY in its infinite wisdumb doesn't have the[…]