Political issues and parties in Israel, Gaza and the West Bank.

Florida Governor Ron DeSantis announces he will remove Airbnb from the state’s blacklist of companies that boycott Israel.

The state suspended the use of Airbnb for state-paid travel and had considered preventing its pension fund from investing in the firm when it goes public, reportedly by 2020, after it announced in November 2018 that it would remove listings of rooms and homes for rent in West Bank settlements. Airbnb said at the time that it consulted with experts to learn about the historical disputes in the region to decide whether it should be doing business in “the occupied territories.”

DeSantis and his Cabinet in January voted to place the company on the list of scrutinized companies following a recommendation by the state Board of Administration.

The company announced in April that it would keep the West Bank listings and donate any profits from them to humanitarian groups. The decision appears to be part of settlements between Airbnb and two groups of American Jewish plaintiffs who had sued the company.

“As Governor, I have an obligation to oppose policies that unfairly target Israel. Once @Airbnb ended their discriminatory policy toward Israel, we decided to remove them from the @FloridaSBA Scrutinized Companies List,” DeSantis tweets. 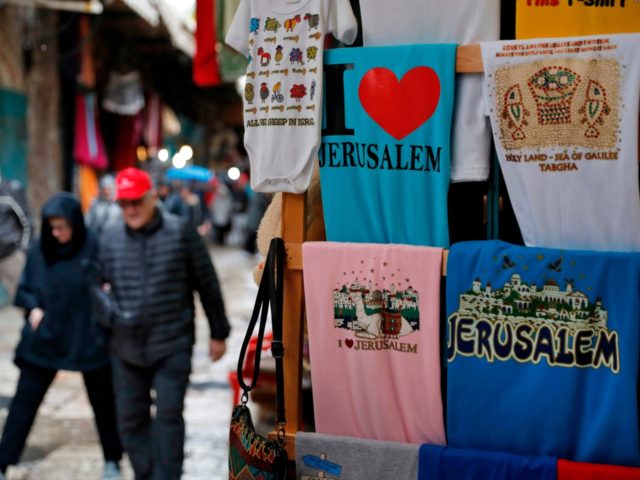 Inbound tourism to Israel has soared to nearly 2.6 million tourists so far in 2019 — a rise of nearly 10 percent against the same period last year, the Central Bureau of Statistics said Monday.

The boom in numbers comes in direct defiance of efforts by the anti-Israel, Palestinian-led Boycott, Divestment, Sanctions (BDS) movement which seeks to isolate the Jewish state and endless reports of violence in other parts of the troubled Middle East.

It also comes on the heels of a successful hosting of the Eurovision song contest finals in May and a rush in visitors over that period driven by a global advertising campaign:

Meanwhile Open Skies aviation reforms have made airfares cheaper in Israel, which helps deliver tourists from around the globe and encourages Israelis to travel abroad, Haaretz reported.

“Summer begins with a hike in tourist arrivals to Israel,” said Tourism Minister Yariv Levin as he applauded the strong figures.

“July was one of the best months for incoming tourism in recent years, part of the trend of increased tourist arrivals in recent months, thanks to the innovative marketing efforts of the [Tourism Ministry]. I have no doubt that this momentum will continue into the coming months.”

Re: The World Says ‘Shalom’ as Israel Inbound Tourism Soars to New Record#15024207

And roughly half of them are statistically Christians visiting because Israel is the land of Jesus.

I don't really understand why you're making a major point of it though, since these numbers are pretty standard. Only slightly up.

Re: The World Says ‘Shalom’ as Israel Inbound Tourism Soars to New Record#15024213

Are you unironically posting Breitbart?

I hope the rest of us can forget about BDS too.
HalleluYah
The more I study science, the more I believe in God.

skinster wrote:I bet you do. The BDS movement will end as soon as Israel stops being an apartheid state.

Netanyahu's ban on Ilhan Omar and Rashida Tlaib to enter Israel was to prevent them from supporting actions meant to deny Israel's right to exist. Support of the BDS movement is all about denying Israel's right to exist and that is why these two Muslim congresswomen refused to go to Israel in the bipartisan congressional visit. Instead, they chose to accept the itinerary of the Miftah group and PLO and Hamas terrorists.

That group, named Miftah, has a long record of anti-Israel rhetoric that includes downplaying attacks on Israelis and even describing suicide bombers as "sacrificing their lives for the cause."

Netanyahu cited Miftah as he alleged the lawmakers had ulterior, anti-Israel motives in their planned Israel trip.

For instance, a 2006 Miftah report dealing with the Second Intifada – a wave of Palestinian violence in the early 2000s – discussed a 2002 Jerusalem suicide bombing under a section titled “Fighting Back.” It described the attack, where Wafa Idrees blew herself up with a bomb that killed an Israeli and injured more than 100 others, as “the beginning of a string of Palestinian women dedicated to sacrificing their lives for the cause.”

More recently, Miftah’s founder, Hanan Ashrawi, a member of the Palestinian Liberation Organization’s executive committee, spoke against referring to Palestinian attackers as terrorists in a 2017 interview.

“They are seen by the people as resistance and you cannot somehow adopt the language of either the international community or the occupier by describing anybody who resists as a terrorist,” she told Germany’s DW.com, describing “this whole labeling thing” as “unfair and unjust.”

Israeli law allows the country to bar anyone who promotes BDS from entering. Omar and Tlaib are vocal supporters of the movement and had planned a trip with a group that appears to endorse it fully. Their colleagues in the House, meanwhile, passed a resolution in opposition to BDS in July with a 398-17 vote.

“These two members were going, they were claiming to be representatives of the U.S. government, but they were seeking to undercut U.S. foreign policy and not represent our actual stance as a government,” Rep. Lee Zeldin, R-N.Y., told "Fox & Friends" on Monday.

https://www.foxnews.com/politics/miftah ... -the-cause
The more I study science, the more I believe in God.

Like
-  20 Aug 2019 22:25 #15028115
Palestinians aren't going to stop fighting for their freedom from Israeli apartheid that denies them human rights. If that were the case, they'd had given up decades ago. BDS is merely the most recent way to oppose Israeli oppression. And it has a lot of support, as can be viewed throughout this thread.
Free Palestine.

After 14 years of being lulled by propagandists into believing that their boycott, divestment, and sanctions campaign (BDS) is a human rights movement, we’re finally waking up to the deception.

The U.S. House last month overwhelmingly passed a bill opposing BDS efforts to target and delegitimize the State of Israel. Last February, the Senate passed a bill, never taken up by the House, legalizing the right of state governments and employee benefit plans to refuse to do business with companies boycotting Israel, thereby protecting the 27 states with anti-BDS legislation. Concerned about BDS similarity to Nazi boycotts and incitement of anti-Semitism becoming “the breeding ground for escalations to violence,” the German parliament recently passed a resolution declaring BDS anti-Semitic.

The Western world is acting, albeit slowly, to unmask BDS for what it is — a dangerous 21st-century iteration of the age-old scourge of Jew-hatred. Anti-Semitism is a mutating cancer, evolving and adapting, intent on destroying Jews in their host communities. Our State Department definition of modern-day anti-Semitism identifies expressions of hatred, including when disguised as Israel-bashing and anti-Zionism, the hallmarks of BDS.

The BDS movement was founded by left-wing socialists and Marxists in 2001 explicitly to undermine Israel’s sovereignty, skillfully exploiting the language of peace, justice, and human rights to appeal to Western audiences. Adopted by Palestinian extremists in 2005, BDS misleads civic and cultural organizations, governments, and individuals into believing that its goal is merely to establish a Palestinian state living peacefully beside a Jewish state. Using sophisticated subterfuge to hide its linkage to Palestinian terror groups, it obscures its extremist endgame — the destruction of Israel as the nation state of the Jewish people and the creation of yet another Arab-majority state.

People who should know better have bought into this “Big Lie,” conforming to their ideological predisposition and antipathies toward Israel, Jews, and the West. BDS founder Omar Barghouti calls for the destruction of Israel. He explained that a Jewish state “contravene[s] the basic rights of the land’s indigenous Palestinian population.… Ending the occupation doesn’t mean anything if it doesn’t mean upending the Jewish state itself.”

BDS is the latest version of a history of boycotting European Jews. Arabs boycotted Jews in the British Mandate of Palestine. The Arab League formalized this policy in 1945, three years before Israeli statehood.

By delegitimizing and demonizing Israel, BDS flagrantly crosses the line into pure anti-Semitism. Its supporters equate Israel with Nazi Germany and apartheid South Africa. By advocating the right of return of millions of Palestinians, it attacks the Jewish people’s right to self-determination. It targets Jewish students, intimidating, harassing, and physically threatening them.

New York Times writer Roger Cohen, a liberal critic of Israel, realizes that “Mellifluous talk of democracy and rights and justice masks the BDS objective that is nothing other than the end of the Jewish state.”

Israel has issued a report, “Terrorists in Suits,” providing detailed evidence of more than 100 links between BDS and Hamas and the Popular Front for the Liberation of Palestine (PLFP), both U.S.-designated terrorist organizations. More than 30 Hamas and PFLP operatives hold senior positions within BDS advocacy organizations. Known terrorists are invited to national conventions of BDS affiliates, radicalizing followers to view terror acts as legitimate resistance. “We believe that people under occupation, in international law, have a right to resist by any means, including violent means,” Barghouti said.

Victory against this sinister marketing campaign is not at all assured. Strong forces within the Democrat Party inhibit bipartisan support against BDS. Representatives Rashida Tlaib (D-Mich.), Ilan Omar (D-Minn.), champion of the first pro-BDS resolution in Congress, and others invoke America’s boycott of Nazi Germany and the civil rights movement in their support for BDS. Of the seven Democrat presidential candidates, only Amy Klobuchar (D-Minn.) supported the Senate anti-BDS legislation.

https://spectator.org/the-unmasking-of-bds/
The more I study science, the more I believe in God.

Like 1
-  18 Nov 2019 20:05 #15049336
The Us has recognised the legality of West Bank Settlements. This is fantastic news!
While I support the impeachment of Salvador Allende, no executive Presidencies, proportional representation and short fixed term parliaments would have been preferable.

Why you're surprised about this is odd too, given U.S. policy vis-a-vis Israelis and Palestinians.

Anyway, this was basically a thing anyway since Israel has never been punished for its quarter of a million illegal settlers in Palestine's West Bank (an area promised to Palestinians).

But, it's good, insofar as building anti-Zionism in the West. Young Jews in the U.S. are already very much saying goodbye to Zionism, since they don't live through Holocaust-guilt and have access to social media that reports the truth about Palestine and Zionism, so thanks Trump!

Speaking of settlements and other BDS-related stuff, thanks for reviving this thread, Rich.

Like
-  18 Nov 2019 20:23 #15049343
Trump have proved that Obama was a shit president with terrible foreign policy
its the sanctions in Iran that led to the recent protests (soon to be uprising)
Obama gave away Iraq for Iran now Iraqis will have to fight to kick them out more blood to be spilled thanks to Obamba
Obamba also lifted sanctions and gave billions to Iran and their terrorist buddies
the party is over for those guys

Zionist greed and arrogance is a thing though, so of course you would post the above dumb shit.
Free Palestine.

I think it goes the other way, in that online tra[…]

What's a leppo? :?: An Australian leper.

Almost none of these people are going to die. […]