10 Years of The Politics Forum

Events on the Politics Forum and political commentary.

May it live long and prosper.

I was sitting in a cubicle at General Electric, a job where I was paid to do nothing. What I thought would be a dream job in college (getting a paycheck for doing nothing after being lost in the shuffle of a giant unwieldily bureaucracy), was a nightmare. First SE, and then Pofo were my saving graces.

I wanted to spend my days in the cubicle doing something stimulating. Already, my mind was feeling atrophied from being out of academia. Pofo gave me a framework to look through old sources, keep up with news, debate and debate. Theoretical other forums that may exist often were stuck on things happening, but Pofo has always in part been about why things happen (because of the culture, and I'd speculate this results in being grounded in SE at the beginning). In this sense, Pofo also became an extension of getting news for me as, in my opinion, news outlets had already been on a decline that today only continues.

I brought Pofo with me to Ireland after I got fed up with GE and went to graduate school. I briefly saw Soma there, and met a few less prolific people members. Pofo became a haven for me in using sources and keeping things I used to know active while I learned more. It's the same for me today now that I'm on the other side of the classroom.

One last thing, like others have mentioned—I totally thought joining in 2004 made me a total n00b, and I rarely spoke up at first. I think this speaks to the genius of Siberian Fox, actually. That the first generation of pofo seemed sleek, well put together, well regulated, and with a culture unto itself is quite a feat.

Thank you Siberian Fox, and thank you all.

Like
-  06 Jan 2013 00:29 #14142312
I joined PoFo in November 2005 in my freshman year at college. The setting was very good, I remember. I was at the top floor of dormitory building - the computer lab there. It was night time and from the window I could see cars whizzing by see the Galata Bridge. I could hear "Losing my Religion" from the headphones of another freshman in the computer next to mine. I've travelled much since then: changed schools, cities, and even continents. But PoFo is one of the few things in my life that has remained a constant. I dare say I am more familiar with some of the people here than some people I know in real life.

Thank you all for making this forum what it is today.

Thank you, Eauz, for your contributions to the success!

I am a different man when I started here 10 years ago. I was just starting college, hard core Republican, and living with my grandparents. Now I went through three different political parties: Republican, Whig, and was Democrat. I graduated college trying to work full time at my job. I got married four years ago.

The only thing that probably never change is my horrible grammar. 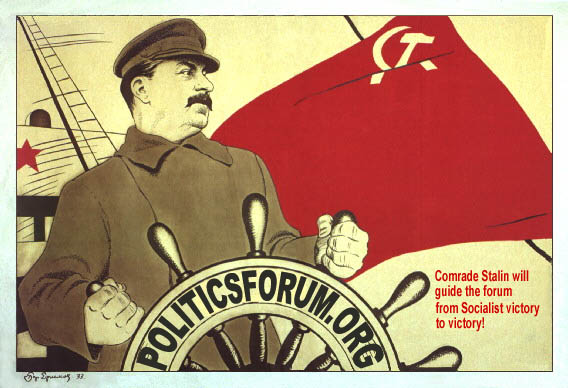 Made possible by not only by the dedication of the great leader himself, but also the voluntary moderator team who certainly deserve much of our thanks for their dedication and continuous efforts.

I'll make sure to raise a drink later to another ten! Cheers all.

Like
-  07 Jan 2013 07:07 #14142911
I joined this forum November 2003. That was many years ago now. It was one night while I was on holiday and just after I had started developing an interest in politics and history. At that time I was a Maoist, even though I did not know anything about what Marxism really was. I logged onto SE and saw a sign pointing me here. Following it I created an account.

Throughout thick and thin PoFo has been here for me. It has been a part of my life for nearly a whole decade. I realise that it is a very special place. As TIG noted, there is a culture here and things, ideas, memories which only those on PoFo share. Despite what happens in the world, here we have something that not everyone knows about. All of my memories are linked to this place because throughout all of what I have experienced in the last ten years, it was always accompanied by using PoFo. How can I forget this forum? I am not able to.

Thank you Siberian Fox, the Admins, Mods, supporters and members of PoFo.

May this forum last for ten more decades!
We are condemned to live.

TAL wrote:The only thing that probably never change is my horrible grammar.

Oh, TAL believe me, your grammar has indeed improved. Cheers mate.
The evolution of character on this forum is great to have witnessed, too. Early on, I was enraged by TAL. Then distantly not caring. Then started to like him. I used to dislike Demo in the beginning as well, until he stopped being crazy; then I started to like him too (which was early on, I guess). Tovarish Spetznaz was crazy from the beginning to the end but I loved him for it -- he was fanatically siding with Marxist or pro-soviet arguments, rightly or wrongly, and never worried about being offensive. I was actually really sad to see him go. I've always secretly hoped he'll come back someday

Whenever I look at some of my earlier postings I tend to think I'm an idiot.

Rancid wrote:Whenever I look at some of my earlier postings I tend to think I'm an idiot.

I think that goes for all of us.

In my introductory thread I wrote:I'm torn a bit between socialism, anarchism and libertarianism

I'm torn a bit between socialism, anarchism and libertarianism

You must have been really torn then.

Catholic Are you a Black Catholic?

I will insert in brackets some words to give you s[…]

Most of my desires are not my own. My mother wante[…]