Law on bicycle use: For safety, cyclist should always ride 2 abreast on left most lane for roads wit - Politics Forum.org | PoFo

Law on bicycle use: For safety, cyclist should always ride 2 abreast on left most lane for roads wit

Law on bicycle use: For safety, cyclist should always ride 2 abreast on left most lane for roads wit#14975868 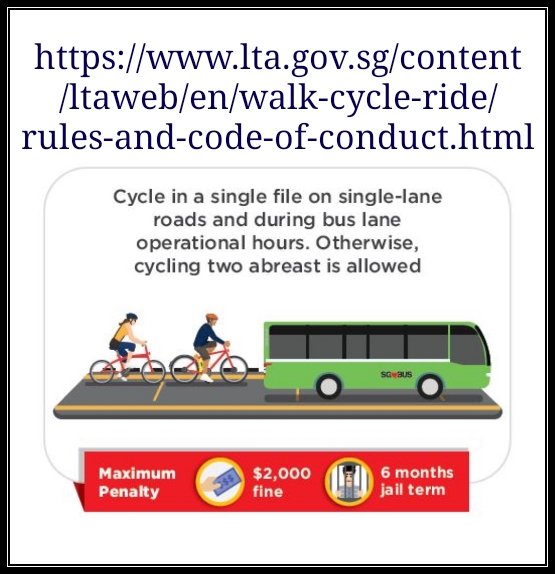 Even in the case of the lorry in the now infamous blue deliberately knocking down cyclist in the vicinity of Pasir Ris Road on 22 December 2018 https://www.straitstimes.com/singapore/transport/lorry-driver-cyclist-arrested-after-pasir-ris-road-altercation where the a screen shot of the lorry attempting to overtake shows the dire danger of having cyclist (especially convoy cyclist) sharing the same lane as vehicular traffic: 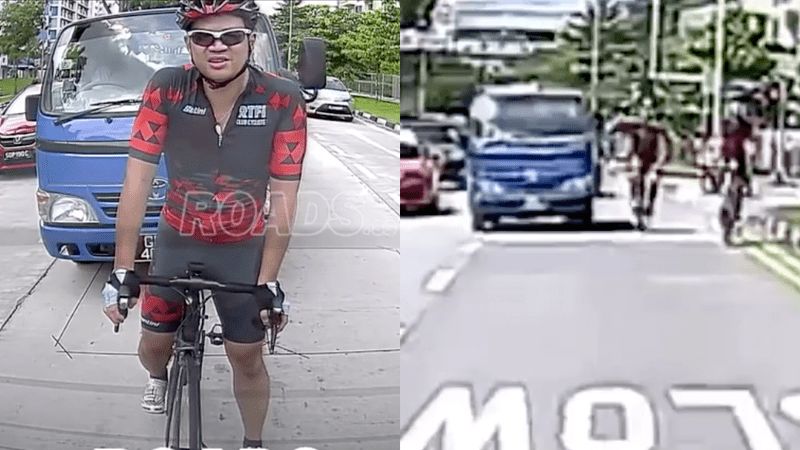 
Many who argue that the cyclist in question should have kept left and simply cycled in single file have probably never cycled on the road before, much less in convoy formation.

The two lanes afford all motorist with the ample and safe opportunity to filter to the right most lane and overtake the convoy before filtering left again, depending on the amount of space there is ahead of the cyclist convoy.

Already, from the Yahoo news video screenshot, there is very little space (much less than standard overtaking clearence of 1.5 metres afforded between cyclist in single file and the overtaking vehicle concerned.

During even heavier traffic, motor vehicles may end up sharing the same lane as cyclist rather than executing a safe and decisive overtake maneuver whilst somewhat sharing the same lane over a prolonged distance, this will be the likely scenario if cyclist were forced into single file riding formation by road bullies or unwise government legislature.

The problem occurs when motorist on the 2nd most left lane refuse to allow vehicles on their left to filter right to overtake the cyclist, but expect the cyclist to squeeze to the side to give way instead. Whilst this option may theoretically possible for motorcycles and really tiny and small cars overtaking single file cyclist, this is most unsatisfactory as the line of cyclist extends longer since this results in the overtaking maneuver becoming more like lane sharing instead, which the left lane is too narrow to permit in Singapore now.

Lane sharing with a lorry the size of the one in the Pasir Ris incident is a very dangerous proposition, much less sharing with the likes of trailers, public buses, which themselves take up almost the entire lane. Lane sharing between motorist and cyclists is a very hazardous form of road use, not worth the risk at all involved.

The safe road sharing procedure is for the large vehicle to overtake by filtering to the right lane and motorist ought to expect them to do so, rather than expect the cyclist to give way.

Heavy trailers and public buses are also likely to provide more than the usual 1.5m side clearence by virtue of their tremendous length and size, as such, even in case the cyclist should lose balance, such an accident will probably not be fatal if the cyclist had sufficient side space and could fall towards an open patch of space without getting run over. This would certainly not be afforded if the cyclist and motor vehicle were actually in close proximity or in fact sharing the same lane to begin with. Cars and motorcyclist also should not be allowed to squeeze between trailer and cyclist just because the heavy, long vehicle gave a more generous 2m side clearence when overtaking: this is extremely reckless driving in practice.

To expect cyclist to cycle in single file on roads with more than one lane is to discourage cycling as a viable form of exercise and to endanger the lives of cyclist needlessly.

In any case, in case of an obstruction like road works, fallen tree branch, accident vehicles unable to leave scene, road cleaning machine, plant pruning or plants watering truck, bus stopping at roadside bus stop, all motorist would have had to avoid the left most lane to get pass the obstruction without and complaint or qualms (or wait for the bus to move forwards as the case may be). Motorist who keep a clear view of the road ahead and have good road sense will filter right early while those not paying attention/ having weaker driving skills, will just have to patiently wait for all traffic to clear or for someone to give way and let them filter right-wards to overcome the obstruction on the left most lane.

Motorist need improve their safe driving awareness, make decisions early, as well as be courteous towards each other so that the roads may be of use to all vehicles that are legally allowed to travel on roads.

Cyclist are also well advised to remain two abreast on all roads (other than single lane roads and bus lanes during operation hours) for their own safety and the smooth, accident free use of roads by all legitimate road users.

LTA should educate cyclist to maintain their two abreast riding formation if they are travelling in 3 cyclist or more convoy formation or traveling at speeds of 30kph upwards.

Encouraging bicycle use as a health conscious and environmentally friendly mode of transportation should be a key pillar in Singapore's war against T2 diabetes mellitus, active mobility, optimization of road space and push for a green economy and greater environmentalism.

This article is awaiting reply at [email protected]

Pls see updates to this article at: https://forums.hardwarezone.com.sg/eat-drink-man-woman-16/safety-cyclist-should-always-ride-abreast-left-most-lane-roads-2-a-5962348.html#post118328257
~ Matthew 25:40: "The King will reply, 'I tell you the truth, whatever you did for one of the least of these brothers of mine, you did for me.'"- (NIV)

Re: Law on bicycle use: For safety, cyclist should always ride 2 abreast on left most lane for roads wit#14975958

Like 1
-  28 Dec 2018 02:36 #14975958
It sounds stupid, dangerous, and is impeding traffic. While it might be allowed, It's certainly not an intelligent thing to do. There is no way that this is "safer".
“Let me never fall into the vulgar mistake of dreaming that I am persecuted whenever I am contradicted.” ― Ralph Waldo Emerson

Re: Law on bicycle use: For safety, cyclist should always ride 2 abreast on left most lane for roads wit#14975968

Godstud wrote:It sounds stupid, dangerous, and is impeding traffic. While it might be allowed, It's certainly not an intelligent thing to do. There is no way that this is "safer".

Word! When riding my bike, if in daytime, try to stick to main highways/roads with a service road, otherwise I only ride at night which is when traffic is zero. It's too dangerous to ride a bike in major cities anymore.

Otherwise I'm on a bus or train.
"Why is it always the innocents who suffer most, when you high lords play your game of thrones?" Lord Varys, Game of Thrones.

Re: Law on bicycle use: For safety, cyclist should always ride 2 abreast on left most lane for roads wit#14979638

PaulLevesque (HWZ) wrote:I encountered quite a number of times liao. Narrow path and the cyclist’s way is blocked. Logically he should wait for chance to overtake the slow walkers. These arsewipes i encounter simply speed up and cut people off. Elderly also no give chance

This is EXACTLY why motorist should always ENCOURAGE real cyclist to cycle 2 abreast on roads which allow so.

(Real meaning actually commuting/ exercising and with clear lookout and not like chit chatting, cycle with ear phones just coasting which should be done at park, pavement or in coffee shop.)

The SAFETY CONSCIOUSNESS like keeping clear look out, early signalling and defensive driving (change lanes early), respect for SAFETY and giving way to others is paramount. (People who treat cyclist as invisible, tail gait cyclist should be fined $150 upwards with at least 6 demerit points for inconsiderate or dangerous driving).

Probably, how cyclist TREAT pedestrians is LEARNED from how motorist treat cyclist.

If motorist insists on SHOVING cyclist off the road, then it's only LOGICAL for cyclist to do LIKEWISE to the pedestrians by shoving them off the pathway and into the ditch, or in your own words "Elderly also no give chance".

Therefore, I conclude that it's the LEADERSHIP in Singapore (/simply motorist for those who cannot understand my metaphors) that is the source of the PROBLEM.

Because they govern Singapore according to JUNGLE LAWS and not Human/ humane society laws.

Bigger vehicles bully smaller ones and thus it all leads to the old and elderly being shoved into the ditch.

Hopefully, these motorist who are the source of the bad behaviour down the size ladder never grow old or become pedestrians themselves because the ditch will be their end; simply because they are the ones responsible for starting the chain reaction of bullying, SACRIFICING SAFETY at the feet of self-serving speed and ego to begin with.

What goes around, comes around.

People have only themselves to blame for their own fate.

As you make your bed, so you must lie in it: 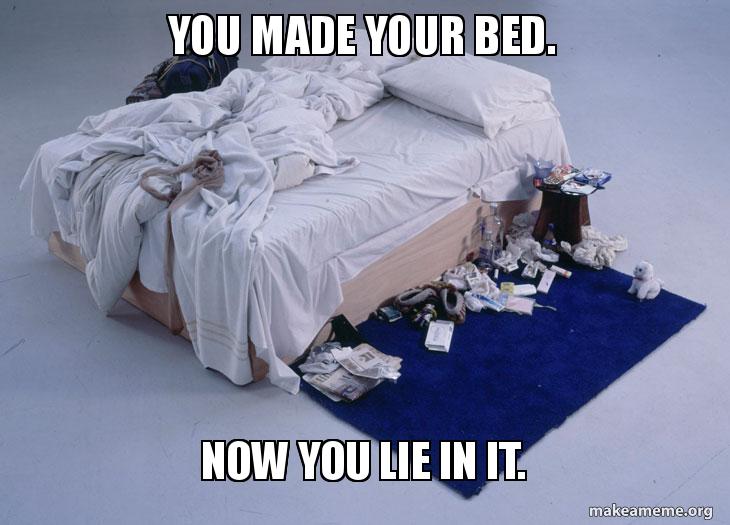 PS: Pedestrian must also be safety conscious. Some old people, balance is not good, so purposely DON'T allow cyclist to overtake at narrow points is okay, or walk 2 abreast because need somebody to hold their hand because wobbly knees or eyes cannot see, just keep left when they are comfortable to be over taken, without malice and with due consideration for others. People with earphones must also make sure that they can hear cyclist bell, or else, they must make extra effort to keep left (although this would require more concentration not to fall off the path) because they want to enjoy loud music in their earphones.
~ Matthew 25:40: "The King will reply, 'I tell you the truth, whatever you did for one of the least of these brothers of mine, you did for me.'"- (NIV)

@Drlee As I previously mentioned, I have no tr[…]

How about YOU? The ability to act based on abstr[…]