Erin Burnett says Trump giving Putin exactly what he wants.
The more I study science, the more I believe in God.

skinster wrote:You don't read Arabic or speak it so how do you know what's going on there, ZN? Got any English sources to claim whatever it is you are?

and I think you shouldn't be surprised by now that Assad is slaughtering civilians.
Assad family are criminals they were slaughtering and torturing their own people since they came to power

Hindsite wrote:CNN's Erin Burnett reacts to President Trump's announcement that he is pulling troops out of Syria.
Published on Dec 19, 2018

Guess what? It has been almost a year since President Trump first announced he was pulling Troops out of Syria. Now he has finally ordered them out after making a deal with the Turkish President Erdogan. Our Troops are now out of Syria. Hooray!

US Troops Withdraw from Syria
The more I study science, the more I believe in God.

Turkish Army along with their proxies from FSA continue a massive offensive in northern Syria within the framework of “Peace Spring” operation.
On Saturday, October 12, the city of Tell al-Abyad was captured after violent clashes against SDF units. According to the local sources, the city and its outskirts were heavily targeted with Turkish airstrikes and artillery which led to casualties not only among Kurdish fighters but civilians. For example, the Syrian Observatory for Human Rights reported that 150 people including 50 civilians had died during 5 days of military operation.
At the same time, Turkish military shelled a SDF-held Kamishli town at Syrian-Iraqi border. A number of locals including children are reported to have been injured in result of mortar shelling. Moreover, electricity and Internet were disabled.
Turkish military operation is obviously worsening an already poor humanitarian situation in northern Syrian provinces. According to the experts of the “Amnesty International” organisation, the «Peace Spring» operation will lead to the disastrous consequences and further destabilization of the region. “Hostilities will impact and restrict access to humanitarian aid pushing the civilian population, which has already suffered years of violence and displacement, to the brink,” the experts say.
In fact, the UN reported that more than 130,000 people had had to leave their homes since the beginning of the Turkish attack on October 9, this year. The organization has also warned that this number can increase at least threefold. According to the spokesman of the UN Office for the Coordination of Humanitarian Affairs Jens Laerke, the number of displaced people can reach 400,000 so that all of them will need help and protection. Mass Media report that every day tens of thousands of people leave action areas for safe zones including eastern border in order to find shelters in neighboring Iraqi territories.
In addition, one more challenge for regional security is sharp increase of unrest and incidents in refugee camps where ISIS terrorists and their families live. Kurdish administration reported that 859 terrorists had escaped from the camp in Ayn Issa, south of the city of Tell al-Abyad, after they attacked the guards. The escaped terrorists will possibly try to take the benefit from the uncertain situation covering the Northeast of the country and hide among rebels going either to the other territories of Syria or the nearest countries. It’s worth mentioning that terrorists’ relatives fuel unrest in al-Hawl camp at the border with Iraq using low security level of the camp connected with partial troops’ withdrawal for reflecting Turkish offensive.
Ankara started “Peace Spring” military operation in chase of its own interests. Obviously, Erdogan’s aim is a total elimination of SDF and annexation of new areas in favour of the “Ottoman Empire” but not a settlement of the conflict.

Like
-  18 Oct 2019 04:18 #15042966
Turkey agreed on Thursday to pause its offensive in Syria for five days to let Kurdish forces withdraw from a "safe zone" Ankara had sought to capture, in a deal hailed by the Trump administration and cast by Turkey as a complete victory.

The truce was announced by U.S. Vice President Mike Pence after talks in Ankara with Turkey's President Tayyip Erdogan, and was swiftly hailed by President Donald Trump, who said it would save "millions of lives."

But if implemented it would achieve all the main objectives Turkey announced when it launched the assault eight days ago: control of a strip of Syria more than 30 km (20 miles) deep, with the Kurdish YPG militia, formerly close U.S. allies, obliged to pull out.

"The safe zone will be primarily enforced by the Turkish Armed Forces," a joint U.S.-Turkish statement released after the talks said.

Turkish Foreign Minister Mevlut Cavusoglu described it as a pause, solely to allow the Kurdish fighters to withdraw.

Kurdish fighters would be forced to give up their heavy weapons and their positions would be destroyed, Cavusoglu said. He declined to call the agreement a "ceasefire," saying ceasefires could be agreed only by legitimate sides, and not by a Kurdish militia that Turkey considers a terrorist group.

"When the terrorist elements completely leave the safe zone, we can stop the operation," Cavusoglu said.

The joint declaration said Washington and Ankara would cooperate on handling Islamic State fighters and family members held in prisons and camps, a major international concern.

Pence said Washington had already been in contact with the Kurdish-led Syrian Democratic Forces (SDF), which had agreed to withdraw and were already pulling out.

However, the Kurdish position was not clear.

Aldar Xelil, a leading Syrian Kurdish politician, said the Kurds would soon issue a statement. He said the Kurds had rejected the Turkish safe zone in the past. They would abide by the ceasefire but would defend themselves, he said on Al Arabiya television.

Pence said that once the pause became permanent, Washington would go ahead with its own plans to withdraw its entire military force from northern Syria, which had partnered with the Kurds to fight against Islamic State.

"Thank you to Erdogan," Trump said. "Millions of lives will be saved!"

The deal struck with Erdogan also provided for Turkey not to engage in military operations in the flashpoint Syrian border town of Kobani, Pence said. Cavusoglu said Turkey had given no commitments about Kobani.

If successful, the deal could smooth over a major rift between Washington and Turkey, its main Muslim ally in NATO.

Like
-  11 Nov 2019 11:40 #15047823
The White Helmets is a propaganda outfit created by the British to support the rebels in Syria. It's leader and founder has been found dead in Istanbul. James Le Mesurier was a former British military intelligence officer. The organisation was closely linked to alleged poison gas attacks in Syria.

Atlantis wrote:The White Helmets is a propaganda outfit created by the British to support the rebels in Syria. It's leader and founder has been found dead in Istanbul. James Le Mesurier was a former British military intelligence officer. The organisation was closely linked to alleged poison gas attacks in Syria.

Like
-  12 Nov 2019 09:26 #15048020
Following the ransacking of Afrin, the Turkish-backed jihadists are now looting and terrorizing the border region occupied by Turkey to facilitate ethnic cleansing of the Kurds: 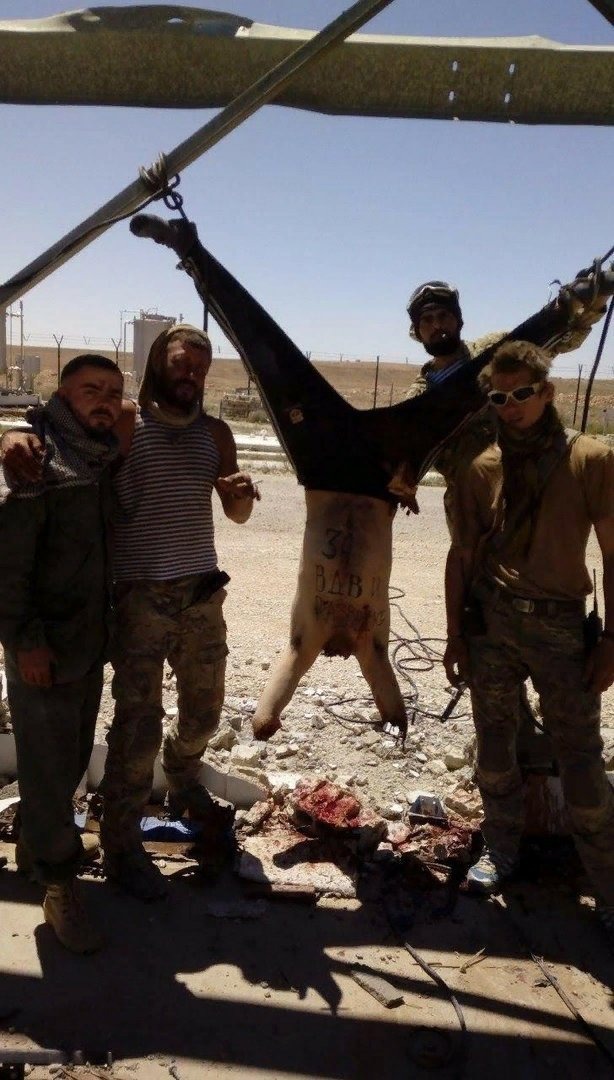 I have no problem with what I saw there. Maybe I'm a bit of a barbarian myself, but you ZN of all people should know that there's only a few ways to truly deal with these Jihadi bastards. A few treatments like this and maybe you guys wouldn't have too many problems either.
But man is a fickle and disreputable creature and perhaps, like a chess-player, is interested in the process of attaining his goal rather than the goal itself.
Fyodor Dostoevsky

Reply
Return to “Middle East”
11 May

Well, anyway, the secret way of Bill Gates to ric[…]

@Juin @Puffer Fish You can be guaranteed tha[…]

I don't know if companies or organizations would […]

Hustle and grind till you die :knife: