After being threatened with a life sentence in 2009 for these acts of sabotage, he pled guilty to arson charges at a Michigan State University lab researching genetically modified organisms for Monsanto, and admitted to 12 other acts of property damage. No one was physically harmed in these actions. At sentencing the judge applied a so-called "terrorism enhancement", adding almost two years to an already extreme sentence requested by the prosecution. This is the harshest punishment against anyone convicted of environmental sabotage to date.

Marius is incarcerated in the high security Administration Unit at the Federal Medical Center Carswell in Fort Worth, Texas, a unit "designed for female inmates with histories of escapes, chronic behavior problems, repeated incidents of assaultive or predatory behavior, or other special management concerns". Marius did not have a record of violating prison rules. It appears he is being held in this unit because of his political beliefs in an effort to silence him. 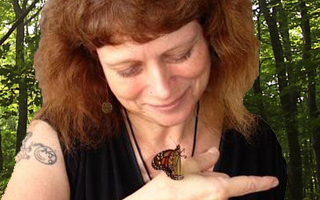 (just to clarify, Marius was born female but identifies as a man)

Marius has a long history of activism going back to his high school years. Born in 1962, his early activism included anti-war and environmental organizing, as well as anti-nuclear activist work. Marius later became more involved in environmental and animal rights campaigns, and helped organize non-violent civil disobedience campaigns, to protect public lands and protest development, as well as anti-fur demonstrations. Marius worked with many organizations, including as Earth First!, Sweetwater Alliance, Food Not Bombs, ADAPTT (Animals Deserve Protection Today and Tomorrow); and through Anarchist Black Cross, also worked on getting books into prisons.

In the years preceding Marius's arrest, he and his partner at the time, Frank Ambrose, had been questioned multiple times by authorities, summoned to grand juries, and forced to surrender DNA evidence; at one point authorities attempted to affix a GPS tracking unit to Mason's car.

Many environmental activists regard the charges against Marius as part of the so-called "Green Scare", a trend by the government of labeling environmental sabotage and civil disobedience as "eco-terrorism", despite these crimes not intending to harm any life. In addition to labeling environmental activists both publicly and legally as "terrorists" the government also charges activists with inflated sentences. In Marius's case, because he was threatened with a life sentence, he decided to plea guilty and received a "lesser" sentence (nearly 22 years). It is believed that part of the reason for the harsh sentence may have been that the prosecution was trying to pressure the defendant into revealing any type of incriminating information against other activists. As part of the plea agreement, Marius was required to confirm statements that his partner had already made, but Marius had no further information to give up.

Marius Mason eventually admitted to committing 14 acts of property destruction together. One of these actions, an attempt to destroy the Nestle-owned Ice Mountain bottled water pumping station, had always been denied by Mason, and activists close to him speculate that he was forced to accept guilt for it in order to accept the plea bargain. (It is a common police tactic to force defendants to accept blame for unsolved crimes in order to close investigations)

Mason accepted a plea bargain for 15-20 years, but Chief U.S. District Judge Paul L. Maloney sentenced him to 21 years and 10 months and ordered restitution of $4.1 million to the sites damaged by his acts. Part of Mason's plea agreement stipulated that he had to accept the so-called Terrorism Enhancement designation, which provided for broad discretion in sentencing. For deciding the sentence, the judge was able to consider the 12 other acts Mason admitted to (but was not being charged with) for the purpose of his sentencing.


You can see this older picture of Marius with her/his cat, which was taken about a year before the prison sentence:
https://i2.wp.com/www.greenisthenewred. ... _mason.jpg

Judging by the pictures, Marius appears to have aged rapidly while in prison. This type of phenomena not that uncommon, probably has to do with low quality food and limited access of physical movement.

Marius is being housed in a restrictive gymnasium-sized unit, containing up to 20 prisoners. The confinement and isolation result in periodic acts of violence and suicide attempts as women struggle to maintain sanity under these harsh conditions. The prisoners are only allowed to exercise in a small, fenced-in, concrete, outdoor area topped by double-coiled razor wire where there is little room for physical activity. The unit is frequently and unpredictably locked down for hours on end due to violence and suicide attempts resulting from the claustrophobic and oppressive conditions. Prisoners leave the building for medical treatment, but only after a protracted wait and fierce advocacy on the part of the prisoner even though the prison is supposedly a medical facility. Access to mental health counseling, medical care, and educational opportunities are greatly diminished because of the security issues particular to this facility.

The constant noise inside the prison unit echoes off the walls. Marius says that the echo alone can drive the other prisoners in the unit to lose their sanity and commit violence.

Between June 18 to August 1 after his arrest, Marius spent nearly two months in the "Special Housing Unit" (solitary confinement for a prison rule violation). This meant that personal belongings were taken away and Marius was not allowed to call his daughter on her birthday. For much of this confinement, Marius's family, support group, and attorney were unable to obtain the specifics of his offense and communication with him was limited. Following a visit by his lawyer, it was learned that Marius was accused of misusing legal mail by sending a June 11 support statement to his attorney who, after reviewing it, sent it out to the group organizing the day of solidarity with anarchist prisoners. The violation stemmed from a technicality; the statement should have been mailed back to Marius for him to send out.

Like
-  22 May 2020 18:57 #15093573
With American forest fires often prone to escalation, it is understandable that arson (which is a fact, the small loss can be argued as luck) is punished harshly even if the said arsonist does not mean to cause catastrophe.

I agree people should pressure the authority to reduce any excessive sentence, and the prosecutors held accountable for possible abuse, but I am against the article seemingly aiming to rally people heads over toes to Mason.

Patrickov wrote:With American forest fires often prone to escalation, it is understandable that arson is punished harshly even if the said arsonist does not mean to cause catastrophe.

Maybe you did not read the article very well. Marius would have never set a forest fire. She/he was an environmental activist committing criminal acts allegedly to protect the environment.

Your example seems completely inane and not directly relevant to this discussion.
Last edited by Puffer Fish on 22 May 2020 19:05, edited 1 time in total.

Donna wrote:It's definitely an excessive punishment and it appears that the feds are trying to do the same thing to anti-racist activists today.

Didn't you want the feds to crack down on terrorism?

Sivad wrote:Didn't you want the feds to crack down on terrorism?

As for the complaint about prison conditions... If you can't do the time, don't do the crime.
“Let me never fall into the vulgar mistake of dreaming that I am persecuted whenever I am contradicted.” ― Ralph Waldo Emerson

Godstud wrote:The maximum punishment for arson is 25 years in the USA. This is within the confines of justice.

As for the complaint about prison conditions... If you can't do the time, don't do the crime.

There are good reasons why property damage should not be considered terrorism, namely because it gives the capitalist state impunity to destroy the lives of social activists who are quite obviously trying to educate the public rather than terrorize it.

And the prison-industrial complex is racist and inhumane and there's probably a gigantic percentage of prisoners in the US today who don't belong in these institutions and certainly don't deserve it.
BIDEN 2020

A good portion of convicts in US prisons are from minor drug crimes.
“Let me never fall into the vulgar mistake of dreaming that I am persecuted whenever I am contradicted.” ― Ralph Waldo Emerson

I just finished The Enchantress of Florence by S[…]

'In the real world entrapment is a silly questi[…]

Sure am glad I am fully vaccinated! I have no desi[…]