Rancid wrote:My understanding is that the Texas grid can trade power with the other grids. In that sense, it is already connected to the other grids. The separateness of the grid is more of an administration thing than anything technical. It's basically not subject to federal regulations and what not because it is contained within the state.

It seems that Texas has ties to other grids but chooses not to use them to avoid federal regulations.

Now I think I need to look up if they used or are using these ties.

Also, I think I need to set myself up for an extreme heatwave overwhelming the Alberta power grid.
There is a crack in everything,
That's how the light gets in...

JohnRawls wrote:With all the shit Cruz has done will he get re-elected when the time comes?

Dunno, we have a of morons in this state.

Pants-of-dog wrote:It seems that Texas has ties to other grids but chooses not to use them to avoid federal regulations.

Aaah, perhaps that is the case.

Like
-  21 Feb 2021 19:23 #15157789
These ties to these other grids also seem to have certain limits. There are only six. They do not allow for wholesale electrical transfers or synchronous transfer of electricity. I am not entirely clear on what that means.
There is a crack in everything,
That's how the light gets in...

Like
-  21 Feb 2021 20:28 #15157792
The crown prince bearing the king's own precious name, so not some pinworm from the king's bullshit TV, declared on Twitter, so it must be official, that calling Ted "Cancun Cruz" is not only legitimate but funny and Trumpish (kingish), too. After such a high-profile support and rescue operation, I'm sure Senator Cruz has nothing to worry about in the future.

blackjack21 wrote:Beto thinks he was born to be president of the United States. He's definitely not a billion times better than anyone.

Trump was definitely less shitty than Clinton. Let's not mistake that as saying that Trump was virtuous. Quite the contrary. People voted for Trump in spite of his personal failings, not because of them. However, people were well aware of Hillary Clinton's long history in politics from the Whitewater matter and the Rose Law Firm billing records, to trashing women sexually harassed or assaulted by her husband, to her participation in the overthrow of numerous governments in the Middle East and North Africa and the refugee crisis created in the wake of those actions. It's one thing to say "Trump is an asshole," but it's another thing to say that 10s of thousands of people died as a result of his actions and millions were displaced from their homes before he became president. That actually happened as a result of a foreign policy Hillary Clinton had a big hand in. Hillary Clinton is not a nice person. I'm not saying you should like Donald Trump, but you should not delude yourself about the alternatives simply because you dislike Trump.

Similarly, you don't need to come to like Ted Cruz to understand that the reason they are attacking him is that political support for Cuomo and Newsom is collapsing and that Cruz has been a vocal critic of them. That fact is that trouble for Cuomo and Newsom is probably coming from inside the White House too--not from Biden, but from Kamala Harris. She needs to knock down her strongest competitors to succeed Joe Biden. As a US Senator, Cruz can't do a thing about the Texas power grid. He has no authority.
"We have put together the most extensive and inclusive voter fraud organization in the history of American politics."

Please. It is over, get out of your hiding place inside his rectum. See the light of the sun.
BIDEN 2020

Quoting the Son of the last Prez, Beren wrote:The crown prince tweet: 'The silence of the left about their own terrible governors is telling"

This "you are silent about other nations except Israel" is a worn-out old propaganda tactic now.

I imagine the police questionning Jeffrey Dahmer about all the dead bodies lying around his apartment, and him saying: 'Oh the hypocrisy. All those dead bodies lying on the floors of other cannibal mass-murderers, and you have to pick on poor wittle me." 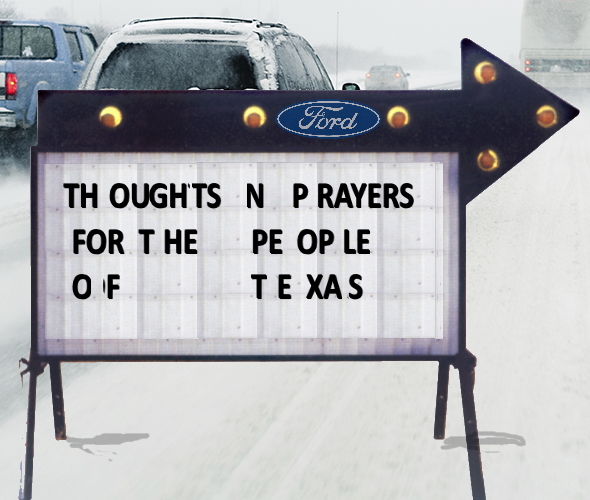 Like
-  24 Feb 2021 04:21 #15158155
Only a couple of weeks ago the Texas legislature talked about seceding from the United States. Now they want federal money. Who will they hit up for money if they secede? Will they ask for foreign aid?

That is what capitalists call ‘privatizing the gains and socializing the losses.’ In Texas they get to forego all the costs of prudent preparation, and when disaster hits, they get the federal government — largely funded by the blue states that pay more tax than they receive in benefits — to bail them out. Then they have the chutzpah to complain about government regulation. How long will we continue to fall for this?

I don’t think we have much of a chance to save ourselves or the planet. The Gov. Greg Abbotts of America will always find a way to spin the facts to prop up whatever is politically necessary for themselves, and the GOP base will swallow the misinformation without a second thought.

The other night when I saw AOC on the news flying to Texas to work on the front lines while at the same time raising millions of dollars for those in need, I told my wife that Fox was going to have a field day with the story. Sure enough, yesterday all they can do is criticize her. She has more integrity than everyone at that network put together. It's just disgusting the amount of hate right-wing media continues to spew.
"Society in those days was a perfectly competent, perfectly complacent, ruthless machine." Virginia Woolf 1897

jimjam wrote:all they can do is criticize her

What did they say about her? How dare she help people?

Like
-  24 Feb 2021 06:28 #15158171
Looks like there is stuff going around social media saying the biden administration blocked helping Texas department of power which requested more power. But the sssociated press stated that Texas’ request was supported on the condition they tried to exhaust other means of producing power before receiving more.
Because of the stated condition the rhetoric is that Biden admin block it due to issues with green energy and omission concerns.
https://www.ethicalpolitics.org/ablunden/pdfs/For%20Ethical%20Politics.pdf#page90
-For Ethical Politics

jimjam wrote:I don’t think we have much of a chance to save ourselves or the planet. The Gov. Greg Abbotts of America will always find a way to spin the facts to prop up whatever is politically necessary for themselves, and the GOP base will swallow the misinformation without a second thought.

The "misinformation" you describe is the *water in which most Americans swim.*

You can't blame the governor of Texas for regurgitating this, nor for the nasty results of following the bad advice that is American capitalist media propaganda.

If any governor tells the truth, he can be smeared in media, impeached, and stripped of his right to collect 60,000 dollar speaking fees from corporations after his term in office.

Sure, because Capitalism has done so well for Ame[…]

studying the other side So let's get this straig[…]

The hard core came to kill, and that they did. Y[…]