Does "my body, my choice" apply to vaccines? - Page 3 - Politics Forum.org | PoFo

Does "my body, my choice" apply to vaccines?

Unthinking Majority wrote:
This has nothing to do with the ethics of abortion.

Slavery also was pushed on a minority who were denied legal personhood by a supermajority. Slavery was banned because it was ethically wrong. 100% of non-black Americans could agree with slavery but that doesn't mean it should be legal or would be ethical.


I've never heard anyone say "Omg i'm pregnant with Bob's fetus". It's easier to kill someone, or enslave someone, when you dehumanize them, because then people don't feel as guilty. This is what slave owners and Nazis did.


So personhood is bestowed upon a fetus by an invisible magic wand that's inside the vagina as the "fetus" slides out of the vaginal canal during childbirth? I thought you said any scientific determinations of such things are arbitrary.


How does a fetus, or a toddler for that matter, compromise for its own rights?

I agree completely, but the choice of language was done by anti-abortion propagandists.

Sure, but the important half of your argument is missing.

Language is important in a court of Law. Science says it's a fetus.

The status of being an individual, with rights, is a cultural determination. Different cultures make that determination differently. Science isn't going to help you. The old way was that children are property, and you can do anything you want to property. You sure you want to go there?

There are some good books on this by medical ethicists, I suggest you read one.
Facts have a well known liberal bias

This pandemic has hurt me a great deal(financially) as I have to live on savings, but even if there hadn't been lockdowns, the business would not have been there.

Forced to protect yourself from a disease by having a tiny little vaccination? Waaaaahhhhh!!! Fucking baby!

Vaccines are a way to put an end to lockdowns, but you're simply not smart enough to realize this.
“Let me never fall into the vulgar mistake of dreaming that I am persecuted whenever I am contradicted.” ― Ralph Waldo Emerson

I was so tempted to say something like that.
Facts have a well known liberal bias

They died with covid, not of covid. Remember, 4+ co-morbidities.

And no the flu shot wouldn't be pushed if just old people and very sickly individuals were dying with it.

If a person dies of a heart attack caused by a lung infection, where they can't get enough oxygen, then they died of a lung infection, not a heart attack. Doctors, who are infinitely smarter than your sorry ass, are far more knowledgeable about this than some anti-vax keyboard warrior, with his head affixed permanently up his ass.

Igor Antunov wrote:And no the flu shot wouldn't be pushed if just old people and very sickly individuals were dying with it.

If 800,000 people died of it, they would. Not only old people have died of covid either.

I hope this isn't you, some day soon. Fools often die of their stupidity.

Man in his 20s, with no pre-existing conditions, dies from COVID-19
https://calgary.ctvnews.ca/man-in-his-2 ... -1.5614063
“Let me never fall into the vulgar mistake of dreaming that I am persecuted whenever I am contradicted.” ― Ralph Waldo Emerson

Igor Antunov wrote:Also, it seems you got too cucky with your junkie mandates for the common cold, democracy says no: 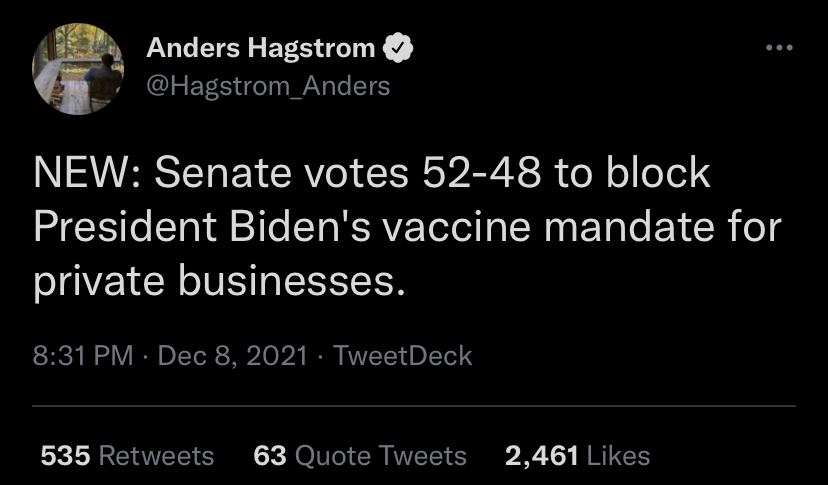 While I welcome the resistance to vaccine mandates, there's nothing particularly democratic about the Senate. The European Union had a similar institutional racist system of unequal voting. I was more than happy to call out the racist filth that said that we British and Germans didn't deserve to have the same voting power as Luxembourgers, Slovaks or Danes.
2nd Amendment Buddhist
No discrimination against the UV
Free KSM
Recognise Pluto's planetary status

Pants-of-dog wrote:
Okay, but all of this os a criticism of how capitalism imposes obligations on us.

It is not an example of state actors depriving s person of body autonomy rights.

Health mandates are what, a century old, maybe older?

It's been litigated in court, and it's settled law. This is a tempest in a cracked teapot.
Facts have a well known liberal bias

Rich wrote:I was more than happy to call out the racist filth that said that we British and Germans didn't deserve to have the same voting power as Luxembourgers, Slovaks or Danes.

If nations have voting power in accordance to their population China and India would dominate the platform, neither of whom I see are good players.

I am not wrong. I am quite aware of incorporation[…]

@QatzelOk The French were great at exploitation[…]

Flawed questioned, both are important. Freedom to[…]