Justin Trudeau’s approval rating by his most ardent supporters has dropped to a lonely single-digit, according to a new poll just released by the non-profit Angus Reid Institute (ARI).

The poll also measured the mood of Canadians, with inflation at a four-decade high, as well as their thoughts about the federal Conservative party’s leadership race.

“Economically, the country is in dire straits,” says ARI. “Inflation is at its highest rate in 39 years, and Canadians are feeling the financial pressure.”

“Approaching half (45%) say their finances are worse off than they were a year ago, while one-third are looking to the future and seeing no relief.”

Of those polled, some claimed excessive government spending in the last two years has fueled rising prices, while others claim the spending was necessary to get the country through the pandemic, and also due to external factors beyond the government’s control. 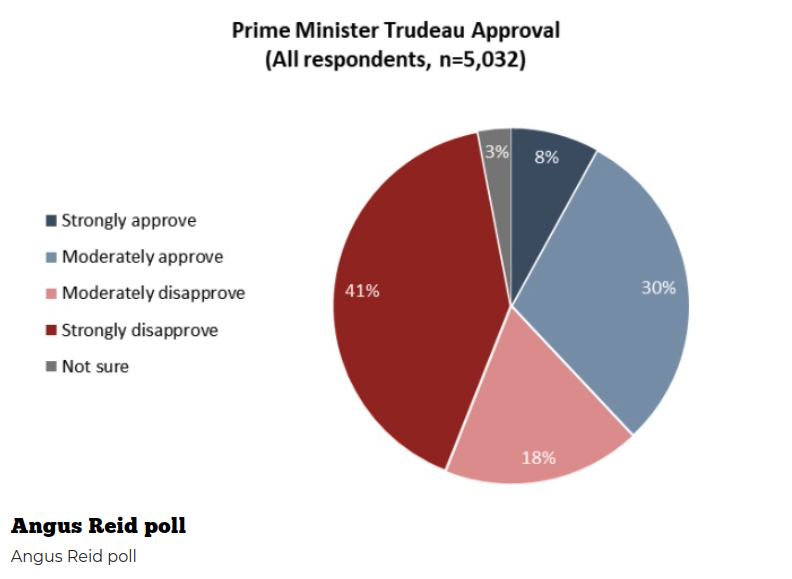 https://www.westernstandard.news/news/t ... 58afde.htm
The people who shut down your businesses and killed your "non-essential" careers are now
asking that you re-elect them so they can keep their jobs. Never forget what they've done to you.

As usual @BlutoSays blast out polls without knowing about how polls work and particularly in the case of Canada.

Want to know who'll be PM next election? Unless something changes(some leadership appears in the opposition parties), it'll remain PM Trudeau.

That you don't like him is understandable, but you're a cunt.
“Let me never fall into the vulgar mistake of dreaming that I am persecuted whenever I am contradicted.” ― Ralph Waldo Emerson

@BlutoSays is a numpty, who wants to blame the world's problems on one person because he's incapable of any sort of reasonable, rational or critical thinking.
“Let me never fall into the vulgar mistake of dreaming that I am persecuted whenever I am contradicted.” ― Ralph Waldo Emerson

ckaihatsu, I hope you will not be angry if I fi[…]

Americans are terrible people, in general. All of […]