Like 3
-  11 Aug 2022 14:15 #15242583
Also news about the airbase attack in Crimea. By the looks of it, it was either Ukranian partisans in crimea or special operations units that launched mortar shells or kamikaze drones at weapon stockpiles that detonated. Sadly not American ATACMS. Just Ukraine doing a good job by its own.

Igor Antunov wrote:Until it matches the 20 year negligence and corruption of the US defeat against the Taliban in the afghan war, you have me bored with your babbling.

There is a difference between war, and occupation. The US won the war. The US is good at winning wars. Wars are easier to win. What was lost was the occupation.

Now, if we look at Russia, they are having trouble winning just the war. This should absolutely concern you.

Russia has to not just win the war, but also occupy. Ukraine, just has to win the war.

I'm not saying Ukraine will win, but you shouldn't be so sure Russia will win either.

Wels wrote:Laws have been changed before, especially by Russia. If some megalomaniac decides to change borders and the world why should the latter agree?
The 'might'(power?) is wherever some being defines it. "Popular will" declared by russian state media is anything but.

Told ya...it's your game, your rules, what USA and puppets have been doing around the world for decades, Russia and China and associates are just starting in their close proximity for now.
As George Bush used to put it - they (Russia and China) think it's the right thing to do and history agrees with them.

Maybe they are not creative enough to invent that kind of game, but they are, certainly, smart enough to apply the same rules.
"The Aggressor is the one who attacks before the USA does", Milos Zeman, the Czech President

Rancid wrote:There is a difference between war, and occupation. The US won the war. The US is good at winning wars. Wars are easier to win. What was lost was the occupation.

Now, if we look at Russia, they are having trouble winning just the war. This should absolutely concern you.

Russia has to not just win the war, but also occupy. Ukraine, just has to win the war.

I'm not saying Ukraine will win, but you shouldn't be so sure Russia will win either.

There is one slight difference, the USA have been attacking way weaker countries without a strong ally or any ally whatsoever, not to mention the ally strong like NATO.
Russia is defending people from aggressive Nazi loving forces supported by the strongest economies of today.

Kind of Deja Vu, though.
"The Aggressor is the one who attacks before the USA does", Milos Zeman, the Czech President

As we have a saying in the Balkans:"Latvia is politely asking for the butt-plug"
"The Aggressor is the one who attacks before the USA does", Milos Zeman, the Czech President

Western and Ukrainian outlets circulated a report, likely false, of a Russian general allegedly threatening to destroy Europe’s largest nuclear facility, the Russian-occupied-liberated Zaporizhzhia Nuclear Power Plant (NPP), if Russia could not hold the plant. Multiple news outlets shared a screenshot from the Russian social networking site Vkontakte that claimed to cite the Russian head of the Zaporizhia occupation garrison, Major General Valery Vasilev, stating that Russia had mined the Zaporizhzhia NPP and that the plant would be “either Russian land or a scorched desert.”

https://www.understandingwar.org/
"The Aggressor is the one who attacks before the USA does", Milos Zeman, the Czech President

Because its fake and newspaper should admit that they published a fake. If you read any public military order by the Russians or the ones that have been publised by intelligence agencies then you will see what language they use in them and their speaches. It is always vague to prevent prosecution and it can say to kill people but it won't say in a straight way but in words like "apply force to unruly elements if resistance is encountered".

Like
-  12 Aug 2022 08:46 #15242649
So the Russians have captured the village of Vesele north east of Kharkov. Now this could be considered just back and forth, as the Russians controlled the village several months back. However when the Ukrainians advanced north and east of Kharkov, this was not dismissed as tactical back and forth, but heralded as the beginnings of a great strategic break through, cutting the supply lines to Izyum. There were even fantasies about a drive north into Russia.

It should be noted that some of the territory captured in the south hadn't been controlled by Russian nationalists since 1920. The great irony is that, although Putin is correct in pointing out that Ukraine is a young nation state. So is Russia. Unlike Britain, France, Germany, Italy, the US, Serbia, Romania, Greece and Bulgaria, Russia was not a nation state prior the First World War. So I don't know whether Putin will be able to hold on to his current acquisitions, but for what its worth as a nation state, this is the largest territory they have ever controlled.
Cultural Marxism judgement of imagined guilty groups, "Whites", etc by completely unrealistic, absolute unchanging standards, while denying, minimising, excusing and relativising the "crimes" of imagined innocent oppressed groups. 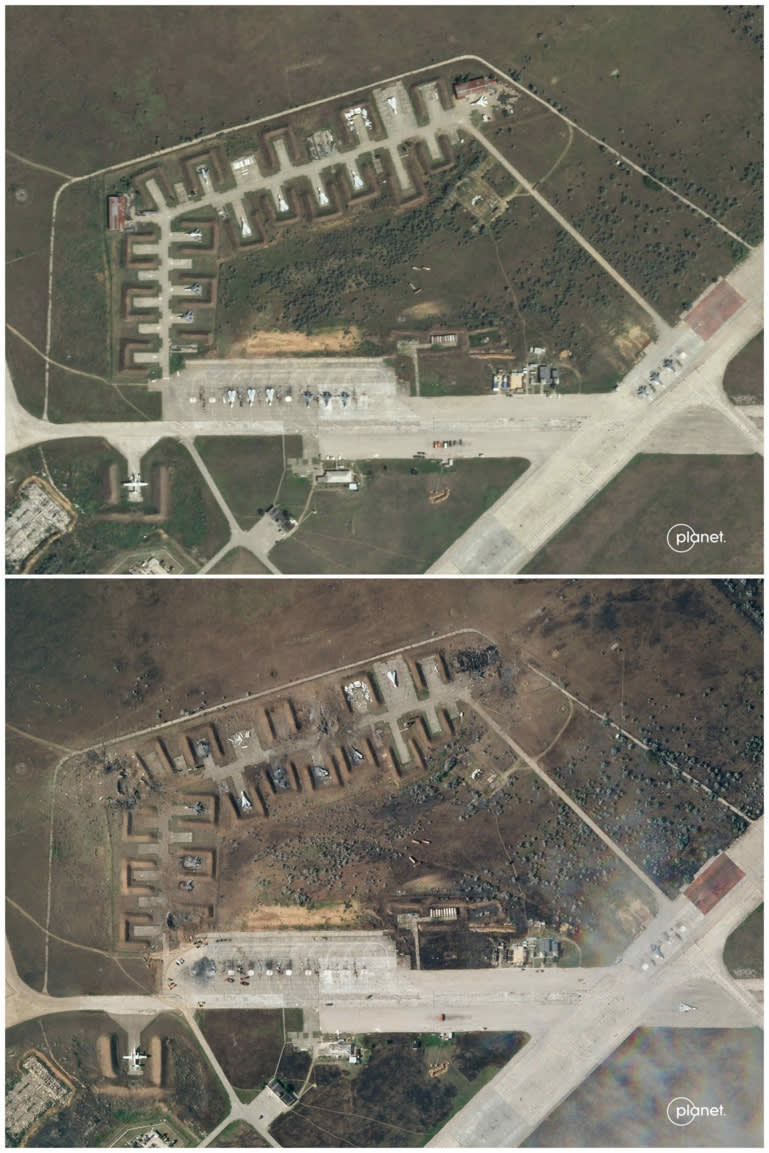 Before and after photos of the destruction of the Russian airbase in Crimea. Total annihilation. Notice the crater marks which prove that it was an attack. All of the planes in that force have been rendered completely destroyed or inoperable.

Complete humiliation. Russia’s army has been humiliated more than a teenage kid jerking off when his mother walked into the room.

In occupied cities including Kherson and Melitopol, every single Russian appointed collaborator has thus far been either assassinated or they themselves abandoned their posts due to fear of repercussions. The locals hate their occupiers with a vengeance and will continue making life for them miserable until they fuck off back to siberia or are buried in the ground.

Ukraine will triumph, and putin‘s imperial ambitions will be erased from history.

"The Aggressor is the one who attacks before the USA does", Milos Zeman, the Czech President

I hate Coca Cola (only the company, sadly) after their behavior in India regarding wastage of water a few years back during drought conditions. But the company itself has been breaking record profits every quarter for the past 3 years, with revenue of 41 billion $ per year and profits of 24 billion $.

200 million $ means very little to them. I wish it meant more, believe me, but we are talking about a company that withdrew from the Indian markets for 16 years because they wouldn't reveal their recipe.

“Without deviation from the norm, progress is not possible.”
― Frank Zappa

Do you also have figures on how much Russia lost based on their portion of sales and distribution?

In the long run Russians will fill the empty spot in the market and profits will stay where they should stay.
"The Aggressor is the one who attacks before the USA does", Milos Zeman, the Czech President


The former Pink Floyd member recently sat down with CNN’s Michael Smerconish (who notably loves Waters’ music but disagrees with some of his political views) to defend some of the extreme messages during his show, such as including president Joe Biden in a slideshow of “war criminals.”

“Well,he’s fuelling the fire in the Ukraine, for a start – that is a huge crime,” he answered when asked why he added Biden in the lineup. “Why won’t the United States of America encourage [Volodymyr] Zelenskyy, the [Ukrainian] president, to negotiate, obviating the need for this horrific, horrendous war that’s killing… We don’t know how many Russians.”

Smerconish told Waters he’s “got it reversed” by “blaming the party that got invaded” but Waters defended his stance: “Well, any war, when did it start? What you need to do is look at the history, and you can say, ‘Well it started on this day.’ You could say it started in 2008 –this war is basically about the action and reaction of NATO pushing right up to the Russian border, which they promised they wouldn’t do when [Mikhail] Gorbachev negotiated the withdrawal of the USSR from the whole of Eastern Europe.”

He also dismissed Smerconish’s comment that Americans are “liberators.” “You got into World War 2 because of Pearl Harbor. You were completely isolationists [beforehand],” Waters argued. “Thank gGd the Russians had already won the bloody war by then. Twenty-three million Russians died, protecting you and me from the Nazi menace.”

“I would suggest that you… go away and read a bit more, and try to figure out what the US would do if the Chinese were putting nuclear armed missiles into Mexico and Canada,” he added.

When Smerconish then noted that the Chinese are “too busy encircling Taiwan as we speak,” Waters snapped back with this proclamation: “Taiwan is part of China.That has been absolutely accepted by the whole of international community since 1948. If you don’t know that you aren’t reading enough. You are believing your side’s propaganda. You can’t have a conversation about human rights and Taiwan without actually doing the reading.”

“The Chinese didn’t invade Iraq and kill a million people in 2013,” Waters added. “Who have the Chinese invaded and slaughtered?”

"The Aggressor is the one who attacks before the USA does", Milos Zeman, the Czech President

I particularly like the "who have the Chinese invaded" part. What an ignorant fuck.

"Legal insanity that's causing security worries not just for Lithuania but for wider Europe — that's how Lithuanians see a Russian initiative to un-recognise their independence.
The move was floated in the Russian Duma on 8 June in a bill saying the USSR's recognition of Lithuania's sovereignty on 7 September 1991 was null and void because it went against the Soviet constitution."

Kyiv City Council had already revoked Moscow's foundation in 1147 anyway, Anušauskas joked on Twitter. If Russia de-recognised Lithuania, Vilnius would revoke the 1634 Treaty of Polyanovka and take back lands from Russia, Maldeikis said.

Those dumb lies have been debunked a million times over. At this point it suffices to say he's a freaking idiot.

No idea what your motivation for spreading this shit is. I guess you're still sour that your Greater Serbia wet dream didn't materialize.