Like
-  22 Sep 2022 23:38 #15248072
To be honest @Rancid ,and this is assuming a lot given the russky track record, the best way to use these new troops is to staff bases in Russian territory and send the volunteer armies to the front line, at least in the short term. This is what I would expect to avoid mass desertion and immediately surge active combat troops in Ukraine.

On a serious note, I personally believe his nuclear threats and take them seriously. If he does give such orders, then the next question would be, would the Russian military carry out those orders to resort to the use of nuclear weapons to stave off defeat? If Putin loses this war in Ukraine, it could cost Putin his own life when he is removed from power in Russia.

If the Russian military carries out Putin's orders to use nuclear weapons then I think there is a good chance NATO will intervene using conventional military methods to strike Russian targets in Ukraine and possibly any nuclear weapons delivery systems that took part in a nuclear attack in Ukraine that are on Russian soil.
"I need ammunition, not a ride!" -Volodymyr Zelenskyy 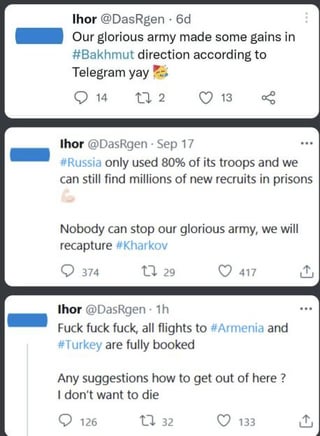 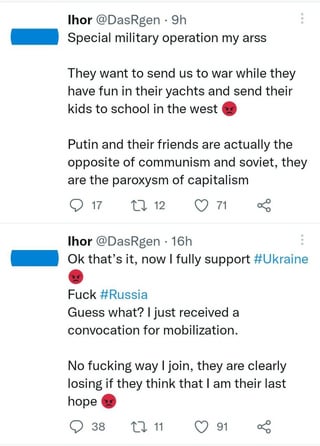 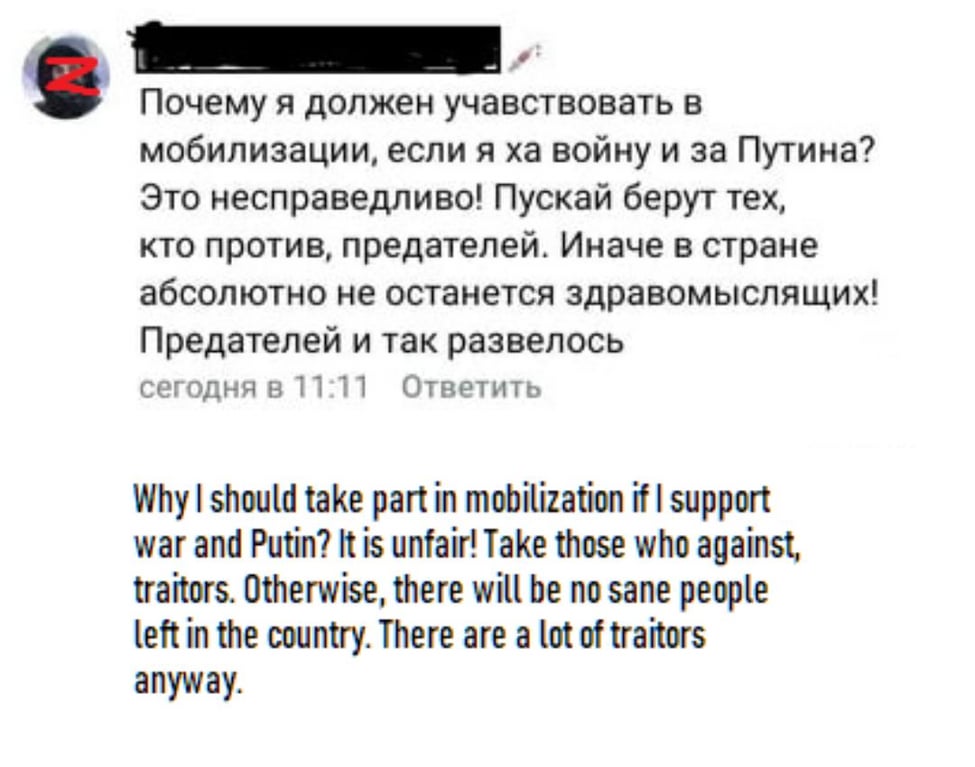 There's hundreds of these collated online.

The "why" is a very important and powerful factor in regards to a war. "Why" are we fighting? "Why" am I risking my life? "Why" am I being asked to make these very serious sacrifices? If their is no good answer to the question "Why?" then people are not going to be interested in fighting. The Ukrainians have a very good answer to the question of "Why?" That answer is "Well, we are fighting for our homes and our families." They have a very good reason to fight.

https://www.cnn.com/videos/world/2022/09/22/putin-russia-mobilization-new-fears-matthew-chance-pkg-tgb-vpx.cnn
"I need ammunition, not a ride!" -Volodymyr Zelenskyy


1. Tomorrow, referendums on reunification with Russia will begin in the DPR, LPR, Kherson region and Zaporozhye region. Residents are invited to either agree or refuse to join the Russian Federation as a subject.

2. Current sociology shows that the answers will be positive, and in the LPR and DPR, overwhelmingly positive. Which, among other things, is due to the unrealistically long wait for this choice, which Crimea got almost for free, and in the LDNR they waited 8 years and fought for this choice.

3. We can expect a sharp increase in shelling of civilian infrastructure by the Armed Forces of Ukraine, terrorist attacks and murders. Undoubtedly, Ukrainian terrorists will kill a certain number of civilians in the coming days, which of course will not change either the very fact of holding referendums or their outcome. After the referenda, a full-fledged CTO regime will most likely be introduced in the new territories of the Russian Federation and the filtration of former ATO officers and other bastards will begin.

5. Residents of these regions, who are located on the territory of the Russian Federation, will be able to vote on the territory of Russia. We have already prepared 4 points for voting in Sevastopol. So the refugees are exercising their right to vote, and the hope of Ukrainian terrorists that the refugees who fled the shelling by the very fact of their absence will lower their turnout at the vote will not come true.

6. After September 27, within 1 to 5 days, the results will be calculated and after their official announcement, applications will be submitted for joining Russia. which will be promptly accepted. This will ensure legal irreversibility, since by accepting these regions into the Russian Federation, any attempts to challenge their new status will be a direct violation of the Constitution, as well as touch upon issues of nuclear doctrine.

7. Accordingly, having passed through a bifurcation point with mobilization, Russia in the next week will rapidly pass another one, connected with the consolidation of the expansion of its borders.

Rancid wrote:The best thing for these new Russians that are going to be sent off to die, is to simply run away once they are deployed.

Looks like Rancid will be getting his updated map of Russia's official boundaries and claims, very soon.

Putin is an infiltration from the CIA, planted in russia to destroy the country from the inside out. Deplete russia military force, kill and/or exile young fertile russians, make the country a shithole essentially. The CIA played it nicely

XogGyux wrote:These old fuckers that incite violence, celebrate violence, justify violence and then they wont go to war themselves, they will send the young people that have no interest in fighting to fight their ego/money-driven wars.

Their lives are clearly too important to risk in a war. The lower classes, however, have completely meaningless and unimportant lives, and can therefore be sacrificed by the million. After all, what else are the proles there for?

…And this is why revolutions happen, @XogGyux.
"Politics is the art of looking for trouble, finding it everywhere, diagnosing it incorrectly and applying the wrong remedies." - Marx (Groucho)

Like
-  23 Sep 2022 08:31 #15248153
Err ... Russia has universal conscription. The claim that in Russia only the poor would be sent to war is incorrect. Even friggin Wikipedia knows better.
There's class warfare, all right, but it's my class, the rich class, that's making war, and we're winning. - Warren Buffett

Like
-  23 Sep 2022 09:01 #15248154
The whole 'russians are escaping russia en-mass to avoid conscription' angle is just globohomo propaganda and cope. It will be unlikely that more than 0.5% of globohomo tainted zoomers run off to join their mentally diseased masters, i,e those who succumbed to the twatter, youtubs and pleddit brainwashing machines.

The Ministry of Internal Affairs of Kazakhstan denied some media reports about the "mass migration" of Russians to the republic.

"According to statistics, about 1 million 660 thousand citizens of the Russian Federation entered Kazakhstan this year, and 1 million 640 thousand left," Acting head of the Migration Service of the Ministry of Internal Affairs of Kazakhstan Aslan Atalykov said.

He recalled that the permitted visa-free period of stay in Kazakhstan for EAEU citizens is 90 calendar days from the date of crossing the state border.

At the same time, only 3.2 thousand Russians were brought to justice for violating migration legislation, which is only 0.2% of the number of Russian citizens who entered Kazakhstan

Like 1
-  23 Sep 2022 10:23 #15248164
I will not stand idly by while people make these filthy lies against the British and German upper classes. Certainly up to the second world war the upper classes in Britain, Germany and many other countries died in disproportionate numbers. In the film "A Bridge too far", Captain Frost is seen running across the road. Frost was actually an advisor to the Film and told them that basically a British officer didn't run. Running was likely to unsettle and even alarm the men. The inaccuracy was left in because the film makers didn't want to challenge Marxist / leftist propaganda. If you want a more historically accurate film on the deportment of British officers you're better off watching "Carry on up the Khyber".

Note even the title "A bridge too far" is a lie. It should be "A bridge, an airfield and a coast too far." The actual aim of the operation not being to merely cross the Rhine but to seize the Deelen Airfield, bring in the 52 Lowland Division and drive to the Zuiderzee coast.
Cultural Marxism judgement of imagined guilty groups, "Whites", etc by completely unrealistic, absolute unchanging standards, while denying, minimising, excusing and relativising the "crimes" of imagined innocent oppressed groups.

I believe you. You can't afford to have junior officers that run away in battle. They set the example and so they have to lead the charge against the enemy so the men follow suit to engage in combat. If an officer freezes up in combat or runs away without a formal order to retreat in the face of battle, they need to take away his commission. He has no business being a leader. The officer corps in the Israeli army takes a lot of casualties because they generally lead from the front and lead the charge against the enemy so they are first killed in combat. But that's how it should be.
Last edited by Politics_Observer on 23 Sep 2022 18:18, edited 2 times in total.
"I need ammunition, not a ride!" -Volodymyr Zelenskyy 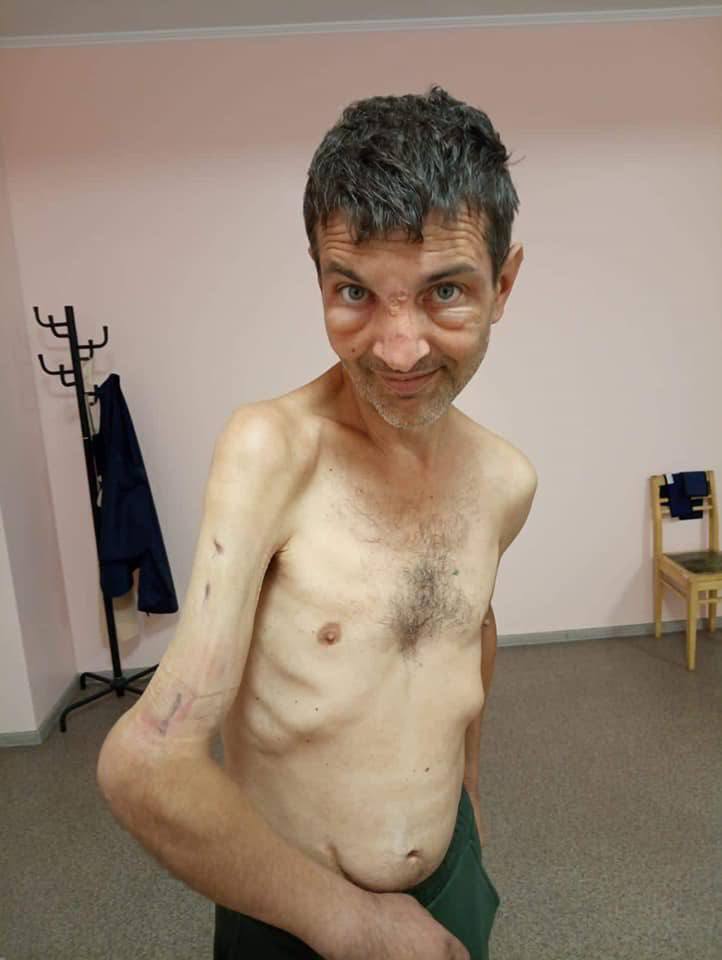 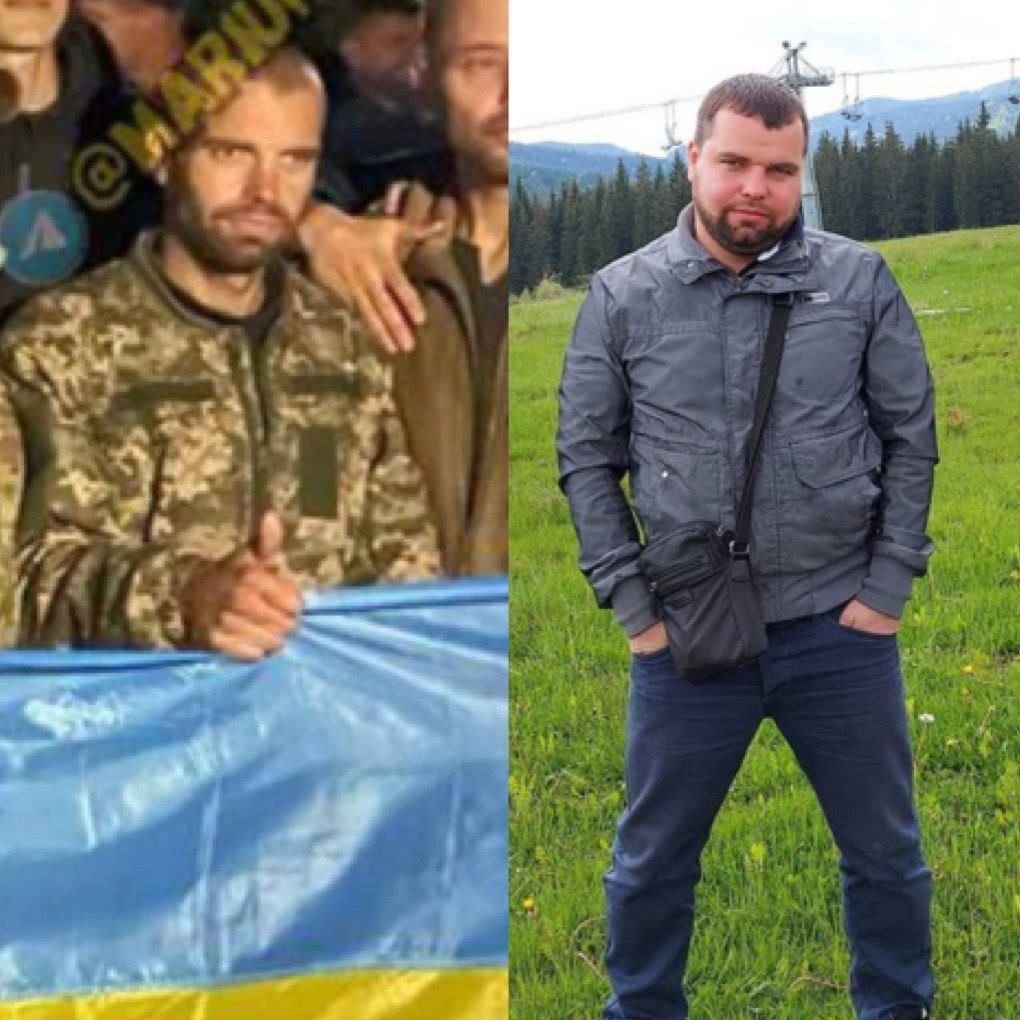 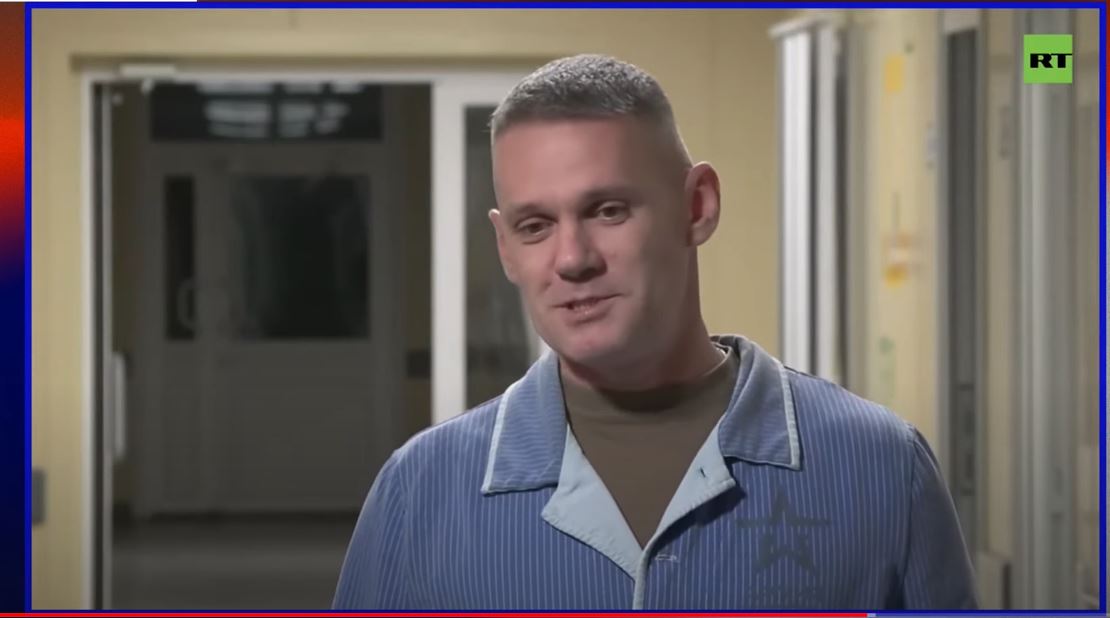 I mean, who are treating their prisoners like Nazis here? By the looks of it, it is Russia. Also the Russian prisoner after return to Russia is saying he wasn't fed and they beat him up every day lol.

I think the solder above that is extremely malnourished, his name is Mikhail Dianov. He is one of the Mariupol defenders.
"I need ammunition, not a ride!" -Volodymyr Zelenskyy

https://trendingnewsbuzzer.com/journali ... ity-unian/
"I need ammunition, not a ride!" -Volodymyr Zelenskyy

+ Sweden and Finnland will be absorbed


I am from a mercenary dynasty ( minimum 700 Years old) I know who has at most money, I could also ask for crown of Balkan

We are heading to a huge crisis this leads in the capitalist system always to worldwar about 70 Years (kontradiev cycle)
Last edited by Sandzak on 23 Sep 2022 20:52, edited 6 times in total.

I am a freethinker

russian winter offensive How is this going to h[…]

First of all, he got to be president after Trump w[…]

The protestors need weapons!!! No, then even[…]