I think it is a cultural issue, and the Western part has to accept a different mentality of the East...

@Istanbuller The police beats shit out of counter-demonstrants at pride day... so people have to accept the EU-Unisex-Agenda.

Oh, c'mon, cut the crap... It is well known fact that Bosnian Muslims followed habits of Ottoman Turks who had many young male lovers, which was in fact a status symbol in 17/18th century.


But, generally nobody cares... 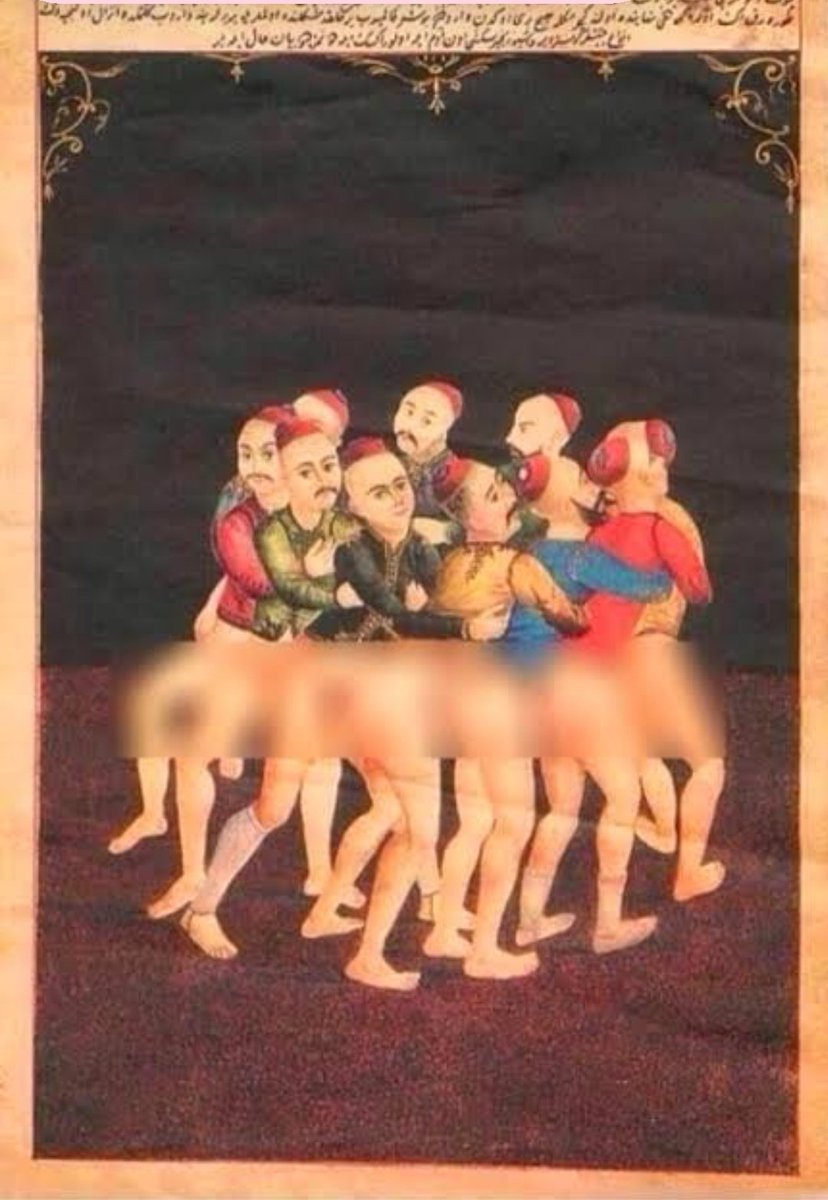 Independent_Srpska wrote:Oh, c'mon, cut the crap... It is well known fact that Bosnian Muslims followed habits of Ottoman Turks who had many young male lovers, which was in fact a status symbol in 17/18th century.

The Bosnian aristocracy was rather busy with uprisings... see Husein Kapetan Gradascevic
Capitalism works too well...

Like
-  18 Oct 2021 06:45 #15194828
In the Communist block, if you did not conform what was the punishment? Death, beatings, impoverishment, restricted/denial of state services which were (often) the only ones available. It resulted in people not trusting those with the stick. Its been a few decades since, but many who lived under those regimes are still alive and the newer generation can easily hear the history and see the results. They are free from the Communists telling them what to do, why should turn around and do what the West tells them? If they dont, what are consequences? - less/no money and no Shengen jobs are nice carrots they will miss, but the stick is puny.

A real culture shift would come from even more American culture. They are accepting of Gays and are still a strong and prosperous country. They have riots, but they don't undermine the nation. They can stick it to Putin and China if they feel like it. They are still trust worthy (though flaky under Democrats). When strikes hit France, UK, Greece, etc.. those countries shut down. China and Russia are confronted to appease America and then get deals on the side. Western Europe is still prosperous, but they are weak.
Jaded centrist. Wary Cautious liberal. Obligated Engineer(Civil).
=-=-=-=-=-= Toronto =-=-=-=-=-=-= E R T W =-=-=-=-=-=

Like
-  18 Oct 2021 11:12 #15194848
Just because homosexuality is outlawed doesnt mean its gone, or that there is less around. It just means homosexuals are suppressed, often driven to suicide etc. They are still homosexual though. Its clearly a condition one is born with, and cannot change.

Homosexuality occurs naturally in animals, too.

The greeks have been very tolerant of homosexuality for centuries. They got in the end conquered by romans due to the superior military technology of the romans. But thats the only reason they got conquered.

Likewise the romans, until they converted to christianity.

And besides, allowing homosexuals to freely express and live their different sexuality doesnt change anything about the life of heterosexuals at all. So how exactly is that "decadence" to give homosexuals equal rights ?

The west as a whole clearly has problems, and I guess one could describe them very inaccurately as "decadence". Allowing homosexuality isnt it though.
There's class warfare, all right, but it's my class, the rich class, that's making war, and we're winning. - Warren Buffett

The Bosnian aristocracy was rather busy with uprisings... see Husein Kapetan Gradascevic

The Muslims from Bosnia (as newly converted Ottoman collaborators) had to prove themselves worthy in the eyes of originators Turks, so they went full into homosexuality.

The Empire had different stages at begin they had strict values this eroded over time. The Siege of Vienna was the Zenith... then came decadence not just sexual but also Opium addictance spread... a Bosnian cleric his grandfather get behaded by an Turk because he critized the Turk who opened a brothel...


But look today... Serbia has a lesbian minister... Turkey has Erdogan!
Capitalism works too well...

Like 1
-  25 Oct 2021 00:49 #15195698
good point Sandzak but secularism and everything is possible, is gay parade not already allowed even in Kosovo, simply for money local corrupt elites are ready on everything, tho eu is on brink of economic turmoil if not disaster so dont worry homophobia will not be even close issue for decable!

about Islam and ottoman trends Srpska you are jumping to conclusion, pervert aristocratic trends in the ottoman empire were solely coz the sultans were not rarely sufi followers, and if this is case normally in dualism as sufism is all kind of deviations can pop up, one of the reasons actually way european enlightenment trends flourished mids the empire reaching even till freemasonic lodges and the inception of young turks nationalism secularism etc.

Convince me otherwise.
“Without deviation from the norm, progress is not possible.”
― Frank Zappa

What about Pascal's wager? Or to be precise the intelligent version of Pascal's wager. Pascal said don't engage in homosexual sex because God, the creator of the universe may burn you for eternity if you do. Now Pascal was obviously a moron, because when I look at the career of Alexander the Great, how can anyone seriously doubt that, that was a sign from God that he wants us, nay commands us to engage in homosexual sex. How can one refrain from homosexual sex and not fear eternal damnation by the creator of the universe. I mean that's just looking at Alexander, the Cultural ancestor of so many civilisations. Don't get me started on the Queen of Bithynia, or the battle of Alamein.
2nd Amendment Buddhist
No discrimination against the UV
Free KSM
Recognise Pluto's planetary status

Sandzak wrote:The gay issue shows the dividing lines between East and West. Me as Muslim, and more as East-European I am homophobe.

There is nothing different between European cultures with engaging in homosexuality activity, the only difference between them is acceptance. Where one you have to hide your activity and even become a hypocrite in many cases in Eastern Europe, in the West you can engage in sexual preferences without persecution.

Do they have flags to wave them? Or do they not need as much attention.
Capitalism works too well...

Sandzak wrote:Do they have flags to wave them? Or do they not need as much attention.

This doesn't have to be a movement if that is what you are worried about. I always try and distinguish a difference between sexual preference and wokenessism because there is a difference and normally the subjects get conflated. The truth is homosexuality is just as prevalent in Eastern Europe as it is in the West. Bringing in laws to make such activity illegal doesn't make it go away but underground. And we should have moved past that anyway. Can you imagine if we tried to make heterosexuality a crime what the uproar would be?

I have also a gay friend but he is decent.

As I was young and beautifull I got several times harassed by gays.

Like 1
-  07 Nov 2021 10:30 #15197219
The West is deeply sick. Just the fact that the statement "Women have vaginas" has become politicly controversial speaks to the incredible triumph and domination of Cultural Marxism within the West. What should healthy, intelligent decent people like myself to do? As a hetro sexual male if forced to choose between these psychopathic hate filled Cultural Marxists and those who oppose Cultural Marxists, I may have to go with Polish Papist Marxist bigots or even the Taliban.
2nd Amendment Buddhist
No discrimination against the UV
Free KSM
Recognise Pluto's planetary status

Highheels destabilize the point of your body that is under the most stress from weight.

In a panic, highheels are extremely dangerous, because you will hurt the people you run over, since the majority of the weight of the body is concentrated in two small points. People literally have died from highheels during panics.

-> There isnt a single good reason for anyone to wear highheels. EVER.

They are already a really bad idea for regular workers. Maybe if the lady in question is a boss and is sitting in chairs all the time. For soldiers especially they are a completely retarded idea. Being able to run migh save your life. Unintentionally killing people you walk over is also especially bad for soldiers.

Whats next ? Binding the feet, like the chinese did in the past ?!?

The chinese also thought that foot binding would be "feminine". It really wasnt either.

Destroying your body is a bad idea. Dont do it.
There's class warfare, all right, but it's my class, the rich class, that's making war, and we're winning. - Warren Buffett

Like
-  15 Jan 2022 15:12 #15207435
The cultural split is not exactly huge, but there are some diverging interests on some important matters, just look at the current energy crisis: the Germans and some other morons in Western Europe are not bothered by huge energy prices, they want it to be as expensive as possible, while the Eastern Europeans are suffering the most, but even in EE there are some stupid and strange behaviors like Poland's rejection of Russian gas which leads to higher and higher prices for all energy.

We would be living in feudal societies/dictatorshi[…]

Let us all remember that the first effective COVID[…]

That is correct. Most of our politicians are sha[…]