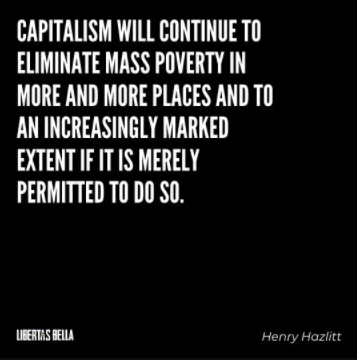 Before we get to the capitalism quotes, let us ask you: Is capitalism perfect? Not remotely. But that begs a follow-up question: Are people perfect?

Enemies of capitalism are quick to point out that it is an imperfect system, yet also advocate for an even more imperfect system to take its place. They want to remove people who are rewarded by production from the economy, and replace them with people who are rewarded by controlling others. The former will put food on the table; the latter will put people in gulags.

Who are capitalism’s greatest enemies? I count three. The first are politicians, who see capitalism as an obstacle separating them from their citizens’ wealth. That wealth also insulates their citizens from the politicians’ influence, which must surely stick in the craw of any would-be tyrants.

The second are businesspeople themselves, who look to the government as their ultimate ace in the hole when it comes to beating competition. If an elite corps of producers can make itself the communist politicians’ key supporter, then they can compel legislation which puts their rivals out of business.

The third are people who cannot fathom what it might be like to possess marketable skills. They look at the wealthy with contempt, believing they could only have gotten that way through chicanery and exploitation. In fairness, plenty of crooks ascend to the highest rungs of society, but this conveniently ignores everyone who made their money by contributing something useful to the world. This is an ability communists seldom, if ever, possess.

For the sake of expediency we could also divide communists into just two classes: Those who insist real communism has never been implemented and demand that we finally give it a chance, and those who know exactly what kind of nightmare world communism creates and want you to live in it.

"Capitalism will continue to eliminate mass poverty in more and more places and to an increasingly marked extent if it is merely permitted to do so."
– Henry Hazlitt

"Since the State necessarily lives by the compulsory confiscation of private capital, and since its expansion necessarily involves ever-greater incursions on private individuals and private enterprise, we must assert that the state is profoundly and inherently anti-capitalist."
– Murray Rothbard

"In the only cases in which the masses have escaped from the kind of grinding poverty you’re talking about, the only cases in recorded history, are where they have had capitalism and largely free trade."
– Milton Friedman

"Prior to capitalism, the way people amassed great wealth was by looting, plundering and enslaving their fellow man. Capitalism made it possible to become wealthy by serving your fellow man."
– Walter E. Williams

"I regard the preservation of what is known as the capitalist system, of the system of free markets and the private ownership of the means of production, as an essential condition of the very survival of mankind."
– Friedrich Hayek

"Capitalism under democracy has a further advantage: its enemies, even when it is attacked, are scattered and weak, and it is usually easily able to array one half of them against the other half, and thus dispose of both."
– H. L. Mencken

"Capitalism was the only system in history where wealth was not acquired by looting, but by production, not by force, but by trade, the only system that stood for man's right to his own mind, to his work, to his life, to his happiness, to himself."
– Ayn Rand

"The moral justification of capitalism lies in the fact that it is the only system consonant with man’s rational nature, that it protects man’s survival qua man, and that its ruling principle is: justice."
– Ayn Rand

"Corresponding to the four branches of philosophy, the four keystones of capitalism are: metaphysically, the requirements of man’s nature and survival – epistemologically, reason – ethically, individual rights, politically, freedom."
– Ayn Rand

"The economic value of a man’s work is determined, on a free market, by a single principle: by the voluntary consent of those who are willing to trade him their work or products in return. This is the moral meaning of the law of supply and demand."
– Ayn Rand

"Laissez-faire capitalism is the only social system based on the recognition of individual rights and, therefore, the only system that bans force from social relationships. By the nature of its basic principles and interests, it is the only system fundamentally opposed to war."
– Ayn Rand

"Capitalism demands the best of every man – his rationality – and rewards him accordingly. It leaves every man free to choose the work he likes, to specialize in it, to trade his product for the products of others, and to go as far on the road of achievement as his ability and ambition will carry him."
– Ayn Rand

"Money demands that you sell, not your weakness to men's stupidity, but your talent to their reason."
– Ayn Rand

"We have been ruled by men who live by illusions … the illusion that there is some other way of creating wealth than hard work and satisfying your customers."
– Margaret Thatcher

"Capitalism has brought with it progress, not merely in production but also in knowledge."
– Albert Einstein

"Socialism is a plan of morally sanctioned theft. It is about dividing up what others have created. Consequently, socialist economies don’t work; they create poverty instead of wealth. This is unarguable historical fact now, but that has not prompted the left to have second thoughts."
– David Horowitz

"As we’ve learned from countless examples throughout history, including now Venezuela, the main difference between capitalism and socialism is this: Capitalism works."
– Mark J. Perry

"All systems are capitalist. It’s just a matter of who owns and controls the capital — ancient king, dictator, or private individual. We should properly be looking at the contrast between a free market system where individuals have the right to live like kings if they have the ability to earn that right and government control of the market system such as we find today in socialist nations."
– Ronald Reagan

"Two decades ago, however, socialism and communism died rudely, then were buried forever by the empirical demonstration of the superiority of market capitalism everywhere from Thatcher’s England to Deng’s Dhina, where just the partial abolition of socialism lifted more people out of poverty than ever in human history."
– Charles Krauthammer

"A system of capitalism presumes sound money, not fiat money manipulated by a central bank. Capitalism cherishes voluntary contracts and interest rates that are determined by savings, not credit creation by a central bank."
– Ron Paul

"Capitalism should not be condemned, since we haven't had capitalism."
– Ron Paul

"Capitalism is not an 'ism.' It is closer to being the opposite of an 'ism,' because it is simply the freedom of ordinary people to make whatever economic transactions they can mutually agree to."
– Thomas Sowell

"Capitalism knows only one color: that color is green; all else is necessarily subservient to it, hence, race, gender and ethnicity cannot be considered within it."
– Thomas Sowell

"Capitalism has neither the capacity, nor the morality, nor the ethics to solve the problems of poverty."
– Fidel Castro, whose solution to poverty was creating more of it

Capitalism Quotes That’ll Make You Leave the Means of Production Alone originally appeared on Thought Grenades, the blog on Libertas Bella
“A society that puts equality before freedom will get neither. A society that puts freedom before equality will get a high degree of both.”
– Milton Friedman

Re: Capitalism Quotes That’ll Make You Leave the Means of Production Alone#15194381

These threads seem to be pointless.

You should consider making an argument instead of posting lists of witticisms.
There is a crack in everything,
That's how the light gets in...

Re: Capitalism Quotes That’ll Make You Leave the Means of Production Alone#15194393

Like 1
-  14 Oct 2021 16:56 #15194393
“Libertarians are not the brightest lights in the candelabra, a fact that is evident from the alternatives they tend to offer to public prevention of private abuses. For example: if you don’t like working a hundred hours a week for twenty-five cents a day, then find another employer! It is obvious to intelligent people, if not libertarians, that more generous employers will price themselves out of a market whose standards are set by the most rapacious.”
― Michael Lind

“And libertarianism is good because it helps conservatives pass off a patently pro-business political agenda as a noble bid for human freedom. Whatever we may think of libertarianism as a set of ideas, practically speaking, it is a doctrine that owes its visibility to the obvious charms it holds for the wealthy and the powerful. The reason we have so many well-funded libertarians in America these days is not because libertarianism has acquired an enormous grassroots following, but because it appeals to those who are able to fund ideas. Like social Darwinism and Christian Science before it, libertarianism flatters the successful and rationalizes their core beliefs about the world. They warm to the libertarian idea that taxation is theft because they themselves don’t like to pay taxes. They fancy the libertarian notion that regulation is communist because they themselves find regulation intrusive and annoying. Libertarianism is a politics born to be subsidized. In the “free market of ideas,” it is a sure winner.”
― Thomas Frank, The Wrecking Crew: How Conservatives Rule

Re: Capitalism Quotes That’ll Make You Leave the Means of Production Alone#15194577

In the wake of the financial crisis of 2007–2010, the rating agencies came under criticism from investigators, economists, and journalists. The Financial Crisis Inquiry Commission (FCIC)[39] set up by the U.S. Congress and president to investigate the causes of the crisis, and publisher of the Financial Crisis Inquiry Report (FCIR), concluded that the "failures" of the Big Three rating agencies were "essential cogs in the wheel of financial destruction" and "key enablers of the financial meltdown".[40] It went on to say

The mortgage-related securities at the heart of the crisis could not have been marketed and sold without their seal of approval. Investors relied on them, often blindly. In some cases, they were obligated to use them, or regulatory capital standards were hinged on them. This crisis could not have happened without the rating agencies. Their ratings helped the market soar and their downgrades through 2007 and 2008 wreaked havoc across markets and firms."[40]

Critics have claimed there was a conflict of interest for agencies—a conflict between accommodating clients for whom higher ratings of debt mean higher earnings, and accurately rating the debt for the benefit of the debt buyer/investor customers, who provide no revenue to the agencies.[62][63] Being a publicly traded firm intensifies the pressure to grow and increase profits.[64] Of the two biggest agencies Moody's became a public firm in 2001, while Standard & Poor's is part of the publicly traded McGraw-Hill Companies.

One study of "6,500 structured debt ratings" produced by Standard & Poor's, Moody's and Fitch, found ratings by agencies "biased in favour of issuer clients that provide the agencies with more rating business. This result points to a powerful conflict of interest, which goes beyond the occasional disagreement among employees."[51]

Re: Capitalism Quotes That’ll Make You Leave the Means of Production Alone#15194658

Perhaps... there are things you can do to mitigat[…]